Watch: "Baggy Green Is On" As Babar Azam Walks Out For Toss During Pakistan's 1st Test vs Sri Lanka

Sri Lanka and Pakistan play the first Test of the two-match series at the Galle International Stadium. Dimuth Karunaratne won the toss and opted to bat first. 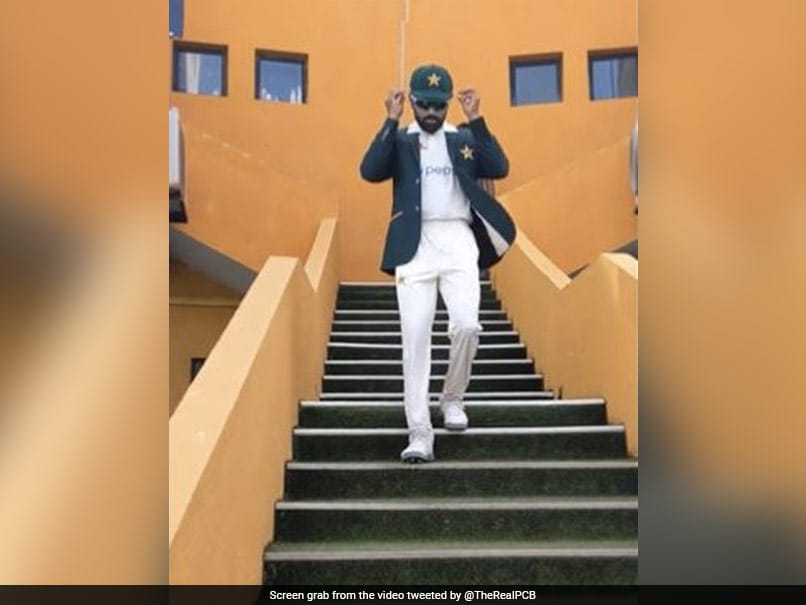 Babar Azam walks out for toss during Pakistan's first Test vs Sri Lanka in Galle on Saturday.© Twitter

The first Test match between Sri Lanka vs Pakistan kicked off at the Galle International Stadium on Saturday. Sri Lanka skipper Dimuth Karunaratne won the toss and opted to bat first against the guests. Soon after the toss, the official Twitter handle of Pakistan Cricket Team shared a video of Babar Azam walking into the stadium in "baggy green". While walking down the stairs of the stadium to reach to the ground, Babar could also be seen wearing his sunglasses.

During Babar's entry into the ground, some of the fans seemingly clapped for the player. Meanwhile, the Pakistan Cricket shared the video and wrote: "Baggy green is on. The green blazer is on. Test cricket feels. #SLvPAK #BackTheBoysInGreen."

Baggy green is on
The green blazer is on

It is worth highlighting that Pakistan skipper Babar was recently lauded for his heartfelt gesture towards India batter Virat Kohli. After Kohli fell for a 25-ball 16 in India's second ODI vs England, Babar consoled the player by giving him strength to fight his lean patch with the bat.

"This too shall pass. Stay strong. #ViratKohli," said Babar in his post on social media that had the picture of the duo standing together with Kohli keeping his right hand on the right shoulder of the Pakistan captain.

The Twitter post from Babar has till now got over 240k likes and over 44k retweets. From fans to former international cricketers, everyone applauded Babar for his way to inspiring Kohli by going beyond the boundaries.

On the other hand, the ongoing tour to England has been a forgettable one for Kohli, who continues to struggle with his batting form. While Kohli had returned scores of 11 and 20 in the rescheduled fifth and final Test against England, he scored 1 and 11 in the two T20Is played against the side before scoring 16 in the second ODI.

Dimuth Karunaratne Sri Lanka vs Pakistan, 1st Test
Get the latest updates on India vs Australia and check out  Schedule, Results and Live Score. Like us on Facebook or follow us on Twitter for more sports updates. You can also download the NDTV Cricket app for Android or iOS.