David Warner was unbeaten on 100 as Australia posted 233/2 against Sri Lanka in 20 overs. 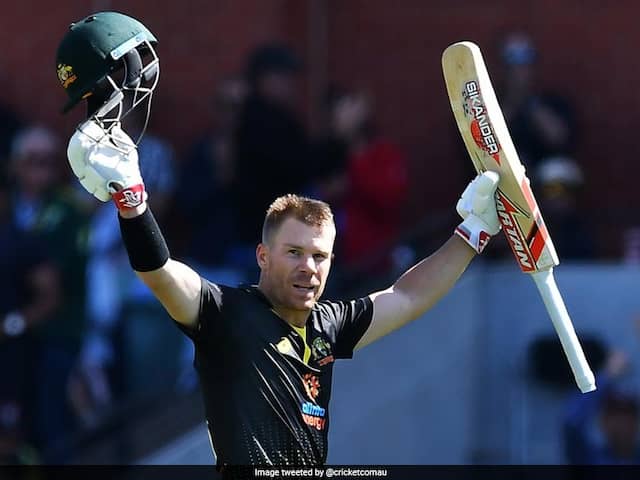 David Warner looked in celebratory mood on his 33rd birthday, smashing Sri Lankan bowlers all around Adelaide as he raced to his maiden T20I century. The swashbuckling opener's unbeaten 100, which came off just 56 deliveries, helped Australia to a grand total of 233 for two in the first T20I match in the three-match series. David Warner, who is Australia's highest run-scorer in T20Is, smashed four sixes and 10 fours, as he entertained the crowd with a range of strokes.

Warner's highest ever T20I score came in his first game at home for Australia since his year-long ban over his involvement in the ball-tampering scandal.

Warner, along with Finch, got off to a cracking start, scoring 57 in the powerplay. The duo carried on the onslaught until Aaron Finch fell for 64, with the score at 122.

Warner was then joined in the middle by Glen Maxwell, who took no time to pick up the momentum, as the two continued to pile on the misery for Sri Lanka. Maxwell smashed 62 off just 28 deliveries as he put up a 107-run stand with the birthday boy, before falling in the final over.

Warner got back on strike with just two deliveries left in the innings. He took a double off the penultimate delivery before reaching the magical three-figure mark with a single off the final ball.

Warner played a variety of shots as Sri Lanka looked like they were out of ideas when it came to stopping him. Along with the usual flicks and cover drives, Warner pulled off a brilliant switch-hit over third man to get a boundary in the ninth over.

Following a disappointing show in the Ashes, Warner will be happy to be back in form, especially with the T20 World Cup coming up in Australia next year.