Nathan Lyon captured five for 68 as Australia bowled out New Zealand for 251. The hosts were 40 without loss in the second innings, holding a lead of 243 runs. 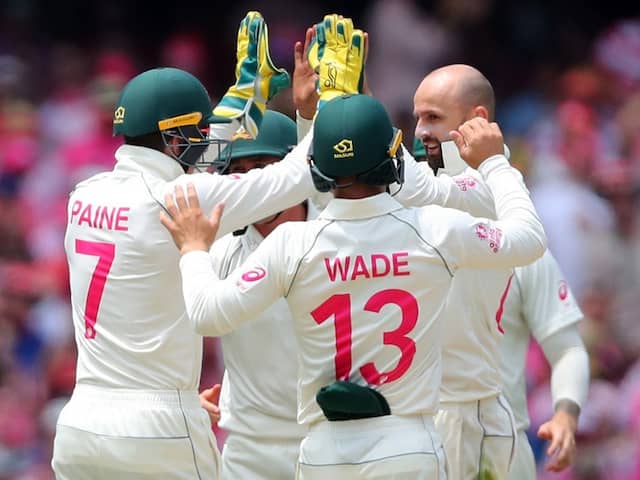 Australia vs New Zealand: Nathan Lyon starred with the ball to put the hosts in command.© AFP

Australia took a commanding 243-run lead over plucky New Zealand in the third Test in Sydney on Sunday, looking set for a clean sweep of the series. The Australians dismissed the Black Caps for 251 to lead by 203 runs after the first innings before batting a second time in a bid to build an overwhelming total with two days remaining. At stumps on day three, the hosts were 40 without loss with David Warner on 23 and Joe Burns not out 16, and were expected to bat on for some time on the fourth day.

"We're in a very good position here," said Lyon, who has now taken a career 385 Test wickets. "A lot of work to do in the morning and we have to see what lead we the batsmen want to get to.

Phillips, who only flew in on the eve of the Test as cover for a team weakened by a virus outbreak, was dropped twice and given a reprieve when caught off a no-ball.

Lyon put down the two caught-and-bowled chances when Phillips was on two and 17.

The Kiwi batsman dodged another bullet on 28 when he was caught by Travis Head at deep mid-wicket only to be recalled when James Pattinson was found to have over-stepped for a no-ball.

Phillips hit a cracking pull shot off Pat Cummins to raise his debut half-century before Cummins got him two balls later, ripping through his defences to take off-stump for 52.

Lyon bowled Will Somerville and Neil Wagner for ducks and fast bowler Matt Henry came out to bat despite fracturing his left hand earlier in the match.

Henry ducked out of the way of a couple of Mitchell Starc thunderbolts directed at his body before he was stumped off Lyon's bowling to end the New Zealand innings.

It was the longest innings of a disastrous lost series for the Kiwis, bettering the 71 overs they faced in the second innings of the second Test in Melbourne.

The Black Caps lost three wickets in the middle session with the experienced Ross Taylor out lbw to Cummins for 22 in the second over after lunch.

Taylor remains 20 runs away from becoming the highest-scoring New Zealand batsman in Tests, behind Stephen Fleming (7,172).

Wicketkeeper BJ Watling chopped a wide Starc delivery on to his stumps for nine off 30 balls to put his team under more pressure.

Colin de Grandhomme was needlessly run out for 20, taking on Matthew Wade's throw from the deep to wicketkeeper Tim Paine while attempting a second run.

Raval, who was dropped after twin batting failures as an opener in the first Test in Perth, batted positively at number three before he was leg before wicket to Lyon for 31 off 58 balls.

Tom Latham was out two balls later in the next over from Cummins, done by a fuller delivery and chipping straight to Starc at mid-on.

The new skipper, deputising for the sidelined Kane Williamson, was denied a deserved half-century on 49 in his 133-ball vigil.

Blundell fell in the day's fifth over, bowled by Lyon for 34.

The Sydney Test is being played against the backdrop of one of Australia's most devastating bushfire seasons, with at least 24 people losing their lives in blazes raging across the country, including on the outskirts of Sydney.

Play will be suspended in the match at the umpire's discretion, should smoke significantly affect air quality or visibility, but the sky above the ground has remained largely clear so far.

David Warner Joe Burns Australia vs New Zealand, 3rd Test Cricket
Get the latest Cricket news, check out the India cricket schedule, Cricket live score . Like us on Facebook or follow us on Twitter for more sports updates. You can also download the NDTV Cricket app for Android or iOS.