At the close, Pakistan were hanging on at 97/8 and trailing by 332 runs with Sarfraz Ahmed on 31 and Mohammad Amir not out on eight. 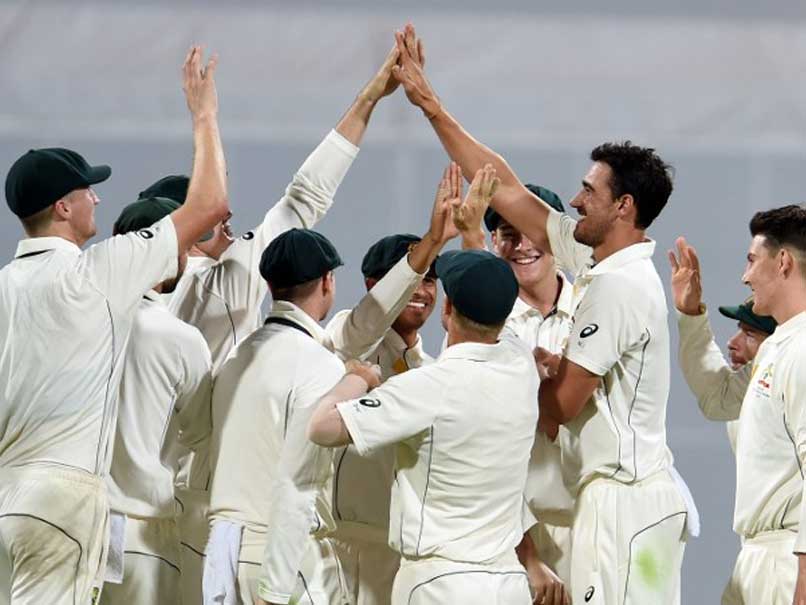 A withering spell of fast bowling backed up by exceptional catching had Pakistan on their knees as Australia took charge of the day-night first Test in Brisbane on Friday.

Starc and Hazlewood took three wickets each and Bird chimed in with two for seven to leave skipper Steve Smith pondering whether to enforce the follow-on after a seven-wicket final session.

At the close, Pakistan were hanging on at 97 for eight and trailing by 332 runs with Sarfraz Ahmed on 31 and Mohammad Amir not out on eight.

Rookie Peter Hanscomb hit a maiden century in Australia's first innings 429, but it was the bowlers coupled with inept Pakistan batting which had the pink ball hurtling to an early resolution.

Hazlewood put the tourists on the skids with two wickets in two balls in his fifth over.

Babar Azam got a thick edge which flew to Steve Smith at second slip for 19 and next ball veteran Younis Khan feathered to wicketkeeper Matthew Wade for a duck.

Skipper Misbah-ul-Haq was never comfortable under the lights and played well away from his body, nicking to Matthew Renshaw at first slip off Bird for four.

Asad Shafiq soon followed prodding at Starc to give Khawaja another slips catch for two.

Sami Aslam, who was twice clocked on the helmet as he turned his head away from rising Hazlewood deliveries, was caught behind off Bird for 22 off 100 balls.

Wahab Riaz and Yasir Shah followed within minutes of each other but Sarfraz and Amir saw out play to stumps.

Handscomb made the most of his opportunity and followed up a half-century on debut against South Africa in Adelaide last month with a polished 105 in Australia's first innings of 429.

Handscomb was out shortly after tea when he chopped a Wahab delivery on to his stumps, one ball after Josh Hazlewood was caught at first slip in Mohammad Amir's previous over.

Tailenders Nathan Lyon (29) and Bird (19) hit out in a crowd-pleasing last-wicket stand of 49, while Wahab Riaz and Amir both finished with four wickets each.

The Australians, who resumed at 288 for three, lost skipper Steve Smith for 130, Nic Maddinson for one, Matthew Wade for seven and Mitchell Starc for 10 in the first session.

Smith was finally out to a wild shot in the 100th over when he slashed at Wahab and was taken by wicketkeeper Sarfraz Ahmed, ending a 172-run stand with Handscomb.

Smith had some luck along the way with his 16th Test century, offering three chances during his 222-ball knock.

The Australian captain was dropped on 53 by Ahmed off spinner Azhar Ali, and on 97 he survived in bizarre circumstances when a faint outside edge off Amir was taken by Ahmed, but there was no appeal.

According to the infra-red imaging system Hot Spot, the pink ball registered a faint contact on the bat and Smith later admitted he had nicked it.

On 129, he jumped down the wicket to luckless leg-spinner Yasir Shah and skied to long-off, where Amir made a hash of the catch.

Comments
Topics mentioned in this article
Pakistan Cricket Team Australia Cricket Team Mitchell Starc Josh Hazlewood Jackson Bird Cricket
Get the latest updates on IPL 2021, check out the IPL 2021 Schedule and Indian Premier League Live Score . Like us on Facebook or follow us on Twitter for more sports updates. You can also download the NDTV Cricket app for Android or iOS.