Adelaide Strikers vs Hobart Hurricanes: Riley Meredith charged in from the bowling end and pulled off a brilliant run out by kicking the ball onto the stumps. 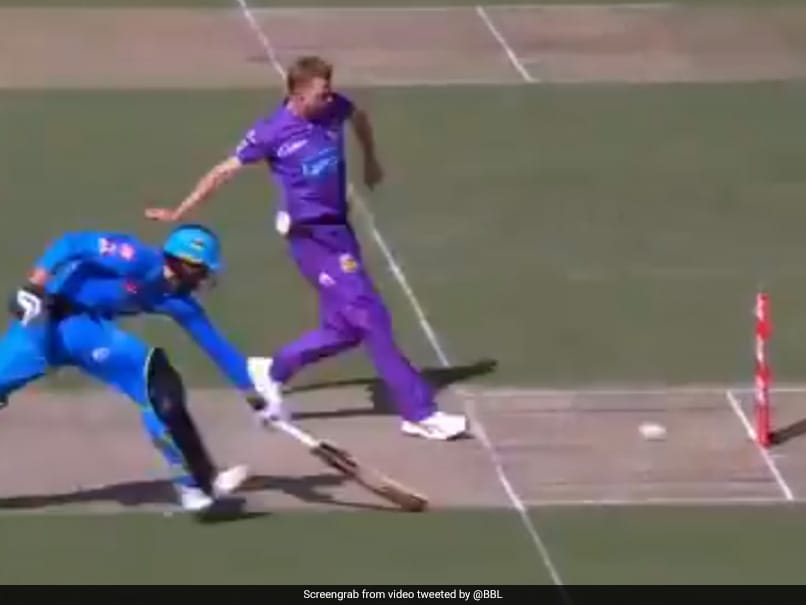 Hobart Hurricanes fast bowler Riley Meredith showed impressive footwork to run out Adelaide Strikers' Ryan Gibson during a Big Bash League (BBL) 2020 game at the Bellerive Oval, Hobart on Sunday. Chasing a target of 175, the Strikers were struggling, having lost four wickets with just 36 runs on the board. Bowling the 9th over of the innings, Meredith bowled a straight delivery to left-handed Matt Renshaw who tried to flick it on the leg side but didn't get the proper connection. The ball dropped just in front of him and he decided to get to the non-striker's end with a quick single. However, an alert Meredith charged in from the bowling end and pulled off a brilliant run out by kicking the ball onto the stumps.

The BBL's official Twitter handle shared the video of the run out, crediting Meredith's moustache for giving him super powers.

"Incredible! That moustache has super powers. Riley Meredith is doing it all out there! #BBL10," BBL tweeted.

Incredible! That moustache has super powers. Riley Meredith is doing it all out there! #BBL10 pic.twitter.com/I6ccaj2QQ7

Apart from affecting the run out, Meredith bowled a brilliant spell, returning with the figures of 2/30 from his four overs. He first dismissed Jonathan Wells in his very first over for a duck.

After pulling off the incredible run out in his second over, Meredith got Rashid Khan caught off the very next delivery, who also departed without troubling the scorers.

Daniel Worrall top-scored for Adelaide Strikers with an unbeaten 39-ball 62 while bowler Danny Briggs also remained not out on 36 off 18 balls. However, the duo, despite breaking the record for 10-wicket stand, couldn't help their side get over the line, with their team losing by 11 runs.

As for Hobart Hurricanes, opener D'Arcy Short was the top-scorer with 72 runs off 48 balls and was adjudged the Player of the match. Will Jacks (34), Colin Ingram (25) and  Tim David (13-ball 21*) also made useful contributions, helping Hurricanes post a challenging total.

Bellerive Oval, Hobart Cricket
Get the latest updates on Fifa Worldcup 2022 and check out  Fifa World Cup Schedule, Stats and Live Cricket Score. Like us on Facebook or follow us on Twitter for more sports updates. You can also download the NDTV Cricket app for Android or iOS.