BBL 2020: The incident occurred in the final over of the Melbourne Stars' innings when Nick Larkin mis-timed his slog sweep, but the ball got entangled in his T-shirt, leaving the fielders searching for the ball. 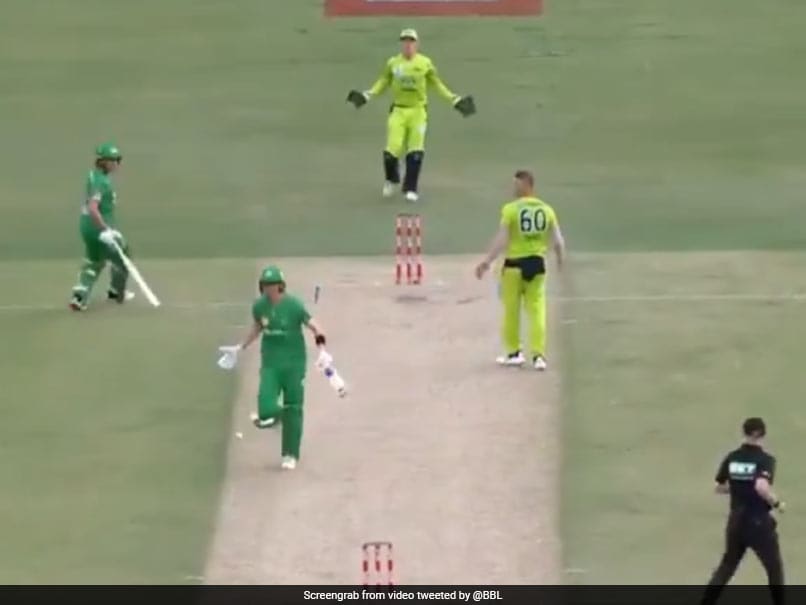 Melbourne Stars batsman Nick Larkin was involved in a rare incident during their Big Bash League (BBL) 2020game against Sydney Thunder at the Manuka Oval, Canberra on Saturday. The incident occurred in the final over of the Stars' innings when Larkin mis-timed a slog sweep off a full delivery from Daniel Sams, but the ball got entangled in his T-shirt, leaving the fielders searching for the ball. Unaware where the ball was, the right-handed batsman decided to steal a quick single but halfway down the pitch realised that ball had got stuck inside his clothing.

The on-field umpires, however, decided to disallow the run, sending Larkin back on strike. Sharing the video of the unusual incident on their official Twitter handle, the Big Bash League tweeted: "Hide the ball and run! Bit cheeky here from Nick Larkin... A @KFCAustralia Bucket Moment | #BBL10".

Larkin ran out of luck on the very next delivery and was cleaned up by a slower yorker from Daniel Sams. He departed after scoring a 14-ball 15. Sams also dismissed Adam Zampa on the fourth delivery of the final over, restricting Melbourne Stars to 169/8 in their 20 overs.

Marcus Stoinis, opening the innings, scored a quick-fire 37-ball 61, studded with six fours and two maximums. Maxwell made 39 off 29 balls but after his departure his side lost momentum as none of the batsmen could accelerate the innings towards the end.

However, both got out in quick succession, leaving the match in balance. At the time of filing this story, Sydney Thunder were 118/3 after 16 overs with 52 required from last four overs.

Sydney Thunder kept losing wickets towards the end and eventually lost the game by 22 runs.

Manuka Oval, Canberra Cricket
Get the latest updates on IPL Auction 2023 and check out  IPL 2023 and Live Cricket Score. Like us on Facebook or follow us on Twitter for more sports updates. You can also download the NDTV Cricket app for Android or iOS.