Hashim Amla (72) and Thisara Perera (47) batted with aggression to help the visitors reach a 175-run target in 19.5 overs to set up an intriguing final match on Friday. 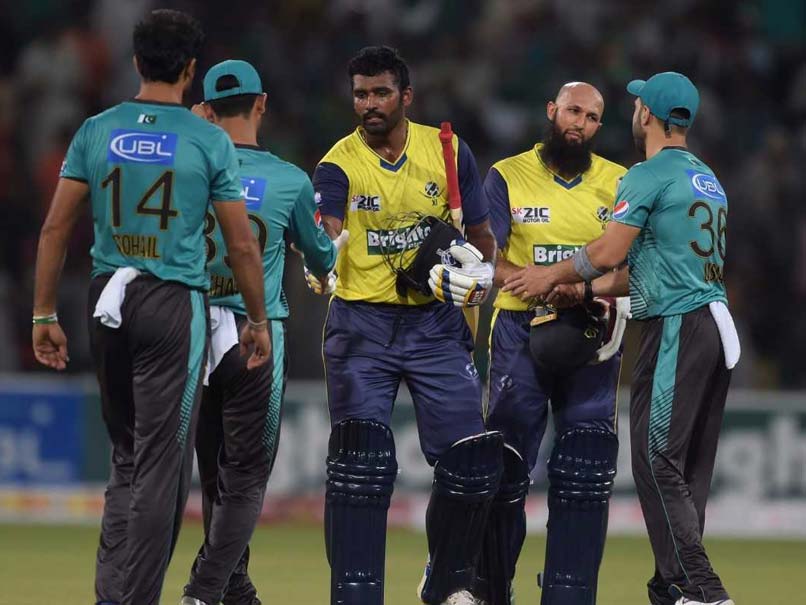 Thisara Perera hit a towering six off the penultimate ball to steer the World XI to a thrilling win.© AFP

Sri Lanka all-rounder Thisara Perera hit a towering six off the penultimate ball to steer the World XI to a thrilling seven-wicket win over Pakistan in the second Twenty20 Wednesday. Perera made a whirlwind 19-ball 47 not out with five sixes, while Hashim Amla finished not out 72 off 55 balls to help the World XI overhaul a 175-run target and level the three-match series 1-1 before a packed Gaddafi stadium in Lahore. Pakistan had registered a 20-run win in Tuesday's first match, which marked the return of international cricket to Pakistan. Left-hander Perera went on a rampage as the visitors needed 33 off the last two overs, smashing two sixes off the 19th over bowled by Sohail Khan before sealing the match in the last over.

Amla, who scored his seventh international Twenty20 half-century, was the steadier of the two, with two sixes and five fours as he helped Perera add 69 runs for the fourth wicket off just 35 balls.

Babar Azam (45), Ahmed Shehzad (43) and Shoaib Malik (39) had good starts but none of them went on to score big, as Pakistan found it tough going on a slow and low pitch after winning the toss.

Opener Fakhar Zaman fell for 21 in the fifth over before Shehzad and Azam steadied the innings with a 59-run stand for the second wicket.

Malik hit two sixes in the last over before holing out off the last delivery of the innings.

Perera (2-23) and West Indian spinner Badree (2-31) were the main wicket takers for the visitors.

Comments
Topics mentioned in this article
Pakistan Cricket Team World XI Hashim Amla Thisara Perera Cricket
Get the latest updates on IPL 2021, IPL Points Table , IPL Schedule 2021 , live score . Like us on Facebook or follow us on Twitter for more sports updates. You can also download the NDTV Cricket app for Android or iOS.