Half-centuries by Roston Chase and Shane Dowrich engineered a West Indies revival in reaching 244 for seven at stumps against Pakistan on the opening day of the first Test at Sabina Park. 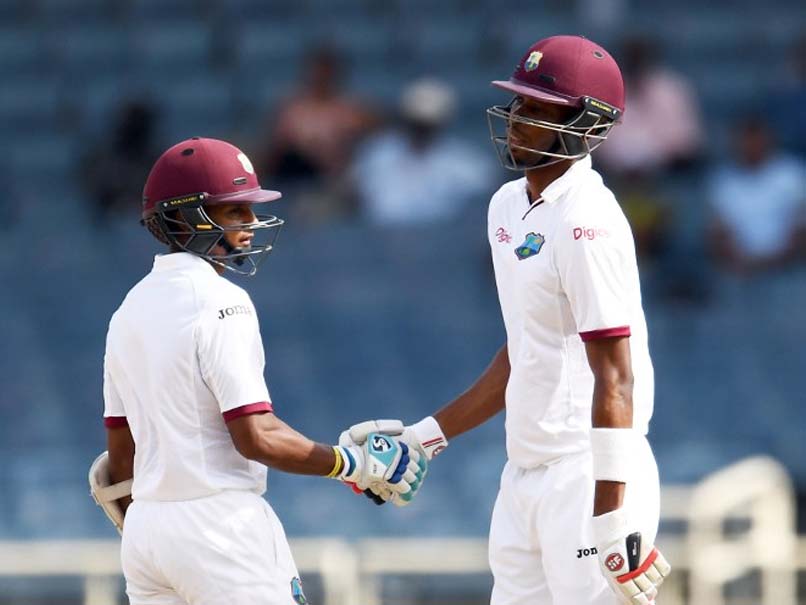 Half-centuries by Roston Chase and Shane Dowrich engineered a West Indiesrevival in reaching 244 for seven at stumps against Pakistanon the opening day of the first Test at Sabina Park on Friday. Coming together immediately after lunch when opener Kieran Powell became Mohammad Amir's third wicket with the innings in tatters at 71 for five, Chase batted with confidence and fluency for a top score of 63. His sixth-wicket partnership with Dowrich was worth 118 runs, the wicketkeeper-batsman enhancing his reputation with a polished 56, the pair making a mockery of the West Indies' earlier struggles after they were put in to bat.

On the same ground where an unbeaten hundred in just his second Test match saved the West Indies from defeat against India a year earlier, Chase looked at ease against all bowlers although his penchant for the uncontrolled hook resulted in a couple of narrow escapes.

Yet it was Yasir Shah who removed both him and Dowrich off successive deliveries in the final session.

Made to look ordinary by the pair's positive play through the afternoon, the leg-spinner had the last laugh when he lured Chase into the lofted stroke and Wahab Riaz held an outstanding catch running back from mid-off almost to the boundary rope.

Dowrich was then completely deceived and bowled by the next delivery.

At 189 for seven, Pakistan's hopes of dismissing the West Indies on the opening day were revived, only for captain Jason Holder (30 not out) and specialist spinner Devendra Bishoo (23 not out) to frustrate the visitors with an enterprising unbroken eighth-wicket stand of 55.

Earlier, Mohammad Abbas had a dream start to his Test career, having Kraigg Brathwaite caught at second slip by Younis Khan without scoring with his second delivery sharing the new ball with Amir.

It was an important early breakthrough as the opener had made history in their last Test match meeting with unbeaten scores of 142 and 60 that earned the Caribbean side a five-wicket win in Sharjah last November at the end of an otherwise miserable tour of the United Arab Emirates.

West Indies played two debutants in the middle-order in the pair of Guyanese left-handers Shimron Hetmyer and Vishaul Singh, and Pakistan pressed the advantage even further with Aamir claiming his first wickets for three Test matches.

Maintaining a nagging accuracy, the left-arm fast bowler bowled both Hetmyer and Shai Hope, scattering the stumps with deliveries that jagged in sharply off a good length.

Pakistan's third seamer in their bowling armoury, Riaz, then removed Singh via a fine diving catch by Azhar Ali at backward square-leg to have the home side tottering at that point at 53 for four.

"I was struggling to swing the white ball (during the limited-over matches) but got things working well today," said Amir about his effort on the day of three for 28 off 19 overs.

"(Bowling) coach Azhar Mahmood has been working a lot with me and I got the results, but we have to keep working hard to keep the West Indies down to a manageable total."

West Indies opted to omit Jermaine Blackwood from their final eleven to accommodate the debutants in the batting line-up, meaning there was no Jamaican in the home side for a Test match at Sabina Park for the first time since 1997 when, incidentally, the opponents were also Pakistan.

Notwithstanding his impressive entry to senior international cricket during the limited-over leg of the tour, the visitors resisted the temptation to include the uncapped Shadab Khan in their team as a second spinner in support of Shah, choosing instead to introduce 27-year-old Abbas to Test cricket.

This is the 50th Test between the two nations and also the 50th Test match to be played at Sabina Park since the very first at the venue in 1930.

Comments
Topics mentioned in this article
West Indies Cricket Team Pakistan Cricket Team Mohammad Amir Yasir Shah Sabina Park, Kingston, Jamaica Cricket Shane Dowrich
Get the latest updates on SA vs IND 2021-22, check out the Schedule and Live Score . Like us on Facebook or follow us on Twitter for more sports updates. You can also download the NDTV Cricket app for Android or iOS.