Sathish, the defending champion, lifted a total of 317kg and was so ahead of the competition that he forfeited his final clean and jerk lift. 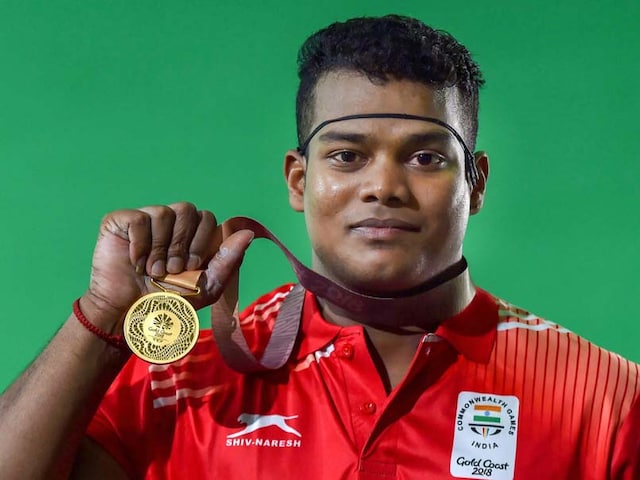 Venkat Rahul Ragala lifted a total of 338kg to finish on top.© PTI

Undeterred by niggles and lack of proper physiotherapic care, Indian weightlifters delivered two more gold medals for the country today, while shuttlers and boxers remained unbeaten to make up for the hockey team's sloppy draw against Pakistan on day 3 of the 21st Commonwealth Games at the Gold Coast on Saturday. India now have four gold, a silver and a bronze in the event, leaving them fourth on the overall tally. Hosts Australia top the charts with a whopping 57 medals -- 20 gold, 17 silver and 20 bronze. India's two gold medals today came through Sathish Sivalingam (77kg) and Venkat Rahul Ragala (85kg), both of whom were not 100 percent fit owing to a respective thigh and knee injuries but still managed to keep ahead of the competition.

The 25-year-old Sathish, the defending champion, lifted a total of 317kg (114kg+173kg) and was so ahead of the competition that he forfeited his final clean and jerk lift.

"I had no hopes of winning a medal after I injured my thighs during the national championships while attempting 194kg in clean and jerk. It's a quadriceps problem, even now I am competing at less than ideal fitness but I am glad that was enough to get me a gold," Sathish said.

The 21-year-old Rahul, who is a Commonwealth Championships gold-medallist, lifted a total of 338kg (151kg+187kg) to finish on top.

"I had been weakened by a knee injury during the Commonwealth Championships last year. But the coaches supported me immensely to get this medal. I haven't been able to train that well," he said.

Their performances despite fitness issues once again highlighted the desperate need for a physiotherapist in the competition area.

Accreditation issues have denied physio Aakrant Saxena access to the lifters in the competition area, forcing him to work with them on the sidelines.

The Indians bossed the badminton court as well and remained unbeaten en route confirming a semifinal berth. The team at the receiving end of the top seeds' ferocity today was Mauritius, blanked 3-0 by Saina Nehwal and Co. in yet another clinical takedown.

Up next for them is Singapore in the semifinals tomorrow. Such has been their dominance that the ruling out of top star and captain, PV Sindhu from the competition, owing to an ankle injury, has had no impact on their fortunes.

Sindhu is, however, likely to return to action for her women's singles campaign which gets underway on April 11.

However, the men's hockey team was a disappointment in its clash against arch-rival Pakistan. After leading 2-1 for 59 minutes, the Indians let in a penalty corner in the final seven seconds to end up with shared honours against a decidedly weaker opponent.

"Today, I didn't recognise the team I have been coaching for the last five months," a livid India coach Sjoerd Marijne said after the pool B match.

Away from the spotlight, both the men's and women's table tennis teams entered the semifinals. Both the teams were up against Malaysia in their respective ties and came out trumps with identical 3-0 margins.

However, as was expected, the Indians competing in swimming, gymnastics and cycling could not throw up any medal surprises and remained in the lower ranks of their respective competitions.

National champion swimmer Sajan Prakash made the finals of the 200m butterfly but ended 8th.

Comments
Topics mentioned in this article
Weightlifting CWG 2018 India
Get the latest Cricket news, check out the India cricket schedule, Cricket live score . Like us on Facebook or follow us on Twitter for more sports updates. You can also download the NDTV Cricket app for Android or iOS.