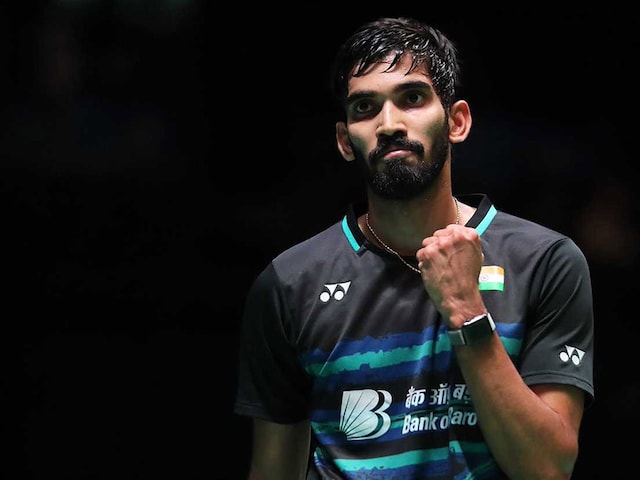 World No.2 Kidambi Srikanth on Saturday led India to a thumping 3-0 win over unfancied Mauritius and advance to the semi-finals of badminton mixed team event at the Commonwealth Games. Srikanth, the top seed, took just 29 minutes to beat Georges Julien Paul 21-12, 21-14 in the men's singles after the two doubles pairs had given India a 2-0 lead at the Carrara Sports Arena. The men's doubles duo of Satwik Rankireddy and Chirag Chandrashekhar Shetty hardly broke a sweat in their 21-12, 21-3 win over Aatish Lubah and Christopher Jean Paul in the first match before Ashwini Ponnappa and N Sikki Reddy chalked out an easy 21-8, 21-7 victory over Aurelie Marie Elisa and Nicki Chan-Lam in the women's doubles.2012 London Olympics medallist Saina Nehwal did not have to play her part in the quarterfinal as India had already taken a match-winning 3-0 lead.

India will take on Singapore in the semi-finals on Sunday. Singapore had beaten hosts Australia 3-0 in another quarter-final match.

Earlier on Friday, India continued their winning run in the mixed team badminton event as they thrashed Scotland 5-0 at the Carrara Sports Arena to top Group A to reach the quarter-finals in the Commonwealth Games. London Olympics bronze medallist Saina Nehwal gave India a 1-0 lead after beating Julie Macpherson 21-14, 21-12 in the women's singles match before World No.2 Kidambi Srikanth outclassed Kieran Merrilees 21-18, 21-2 in men's singles to help India go up 2-0. The women's doubles pair of Ashwini Ponnappa and N. Sikki Reddy then hammered Kirsty Gilmour and Eleanor O'Donnell 21-8, 21-12.

Comments
Topics mentioned in this article
Kidambi Srikanth CWG 2018 Badminton
Get the latest Cricket news, check out the India cricket schedule, Cricket live score . Like us on Facebook or follow us on Twitter for more sports updates. You can also download the NDTV Cricket app for Android or iOS.