India continued their winning run in the mixed team badminton event as they thrashed Scotland 5-0 at the Carrara Sports Arena to top Group A and reach the quarter-finals in the Commonwealth Games on Friday. 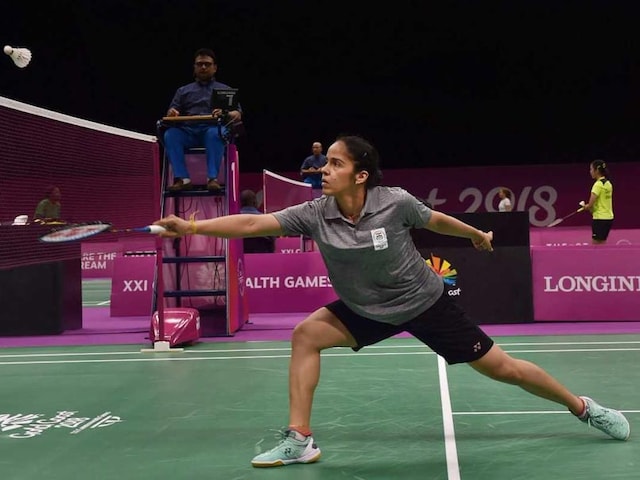 India continued their winning run in the mixed team badminton event as they thrashed Scotland 5-0 at the Carrara Sports Arena to top Group A and reach the quarter-finals in the Commonwealth Games on Friday. London Olympics bronze medallist Saina Nehwal gave India a 1-0 lead after beating Julie Macpherson 21-14, 21-12 in the women's singles match before World No.2 Kidambi Srikanth outclassed Kieran Merrilees 21-18, 21-2 in men's singles to help India go up 2-0. The women's doubles pair of Ashwini Ponnappa and N. Sikki Reddy then hammered Kirsty Gilmour and Eleanor O'Donnell 21-8, 21-12.

Thereafter, the men's doubles duo of Satwik Rankireddy and Chirag Shetty made it 4-0 in India's favour by getting the better of Patrick Machugh and Adam Hall 21-16, 21-19 while the mixed doubles pair of Pranaav Chopra and N. Sikki Reddy completed the 5-0 clean sweep by beating Martin Campbell and Julie Macpherson 21-17, 21-15.

The first match of the morning was unexpectedly not a cakewalk for World No.12 Saina as Julie managed to draw level at 6-6 in the first game before the Indian sneaked past with a slender 11-10 lead by the breather.

Saina was made to toil hard to overtake her opponent post the break and extend her lead to 18-14, following which she eventually managed to pocket the first game.

In the second game, the former World No.1 Indian found back her groove to head to the break with a 11-5 lead before extending it further to 16-5 and eventually clinch it in her favour in 36 minutes.

In the men's singles contest, 2014 Commonwealth Games quarter-finalist Srikanth failed to get off to a convincing start, trailing 1-4 to Merrilees, who extended his lead further to 8-5.

Srikanth, however, managed to pull the Scottish shuttler back and headed into the mid-game break with the lead of a point before closing the 21-minute thriller at 21-18.

In the second game, the Indian was on fire, jumping to a 11-0 lead at the break before stretching it further to 17-1 and eventually destroying the Scottish player 21-2 in just 10 minutes.

With India already 2-0 up in the tie, the women's doubles duo of Ashwini and Sikki got the side an unassailable 3-0 lead beating the Scottish duo of Kirsty and Eleanor in a 27-minute battle.

The Indian pair started confidently to head to the mid-game break with a 11-4 lead. After the break, they stretched their lead further to 17-7 before comfortably pocketing the first game 21-8.

The Indians continued their dominance in the second game, taking a 11-5 lead at the breather and hardly lost any sweat in closing the tie at 21-12.

Thereafter, India managed to retain their unbeaten record as the men's doubles combo of Satwik and Chirag overcame some stiff moments to beat Patrick and Adam 21-16, 21-19 in straight games in a 39-minute battle.

The final match witnessed the Indian mixed doubles pair of Pranaav and Sikki run away with a 11-7 lead midway into the first game before closing it at 21-17.

In the second game, Martin and Julie went ahead with a 8-5 lead before the Indians cut back the deficit to a point at the break. The Indian pair, however, comfortably came back to pocket the game and match 21-15, helping the team complete the 5-0 whitewash.

Comments
Topics mentioned in this article
Badminton CWG 2018 India Saina Nehwal Kidambi Srikanth
Get the latest Cricket news, check out the India cricket schedule, Cricket live score . Like us on Facebook or follow us on Twitter for more sports updates. You can also download the NDTV Cricket app for Android or iOS.