SV Sunil's oodles of experience came in handy as his 59th minute strike enabled India to pip a gritty Wales 4-3 in their second pool B encounter at the Commonwealth Games on Sunday. 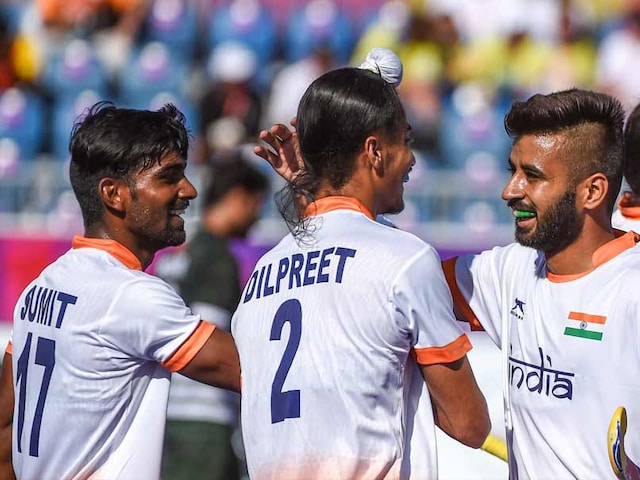 India captain Manpreet Singh admitted that he didn't expect the match to go to the wire.© Hockey India

SV Sunil's oodles of experience came in handy as his 59th minute strike enabled India to pip a gritty Wales 4-3 in their second pool B encounter at the 2018 Commonwealth Games on Sunday. Sunil found the back of the net off a rebound after the Wales custodian had parried away Rupinderpal Singh's dragflick. Unlike the drawn game against Pakistan, the Indian defence held their nerves during the final minute to log home full points. The other scorers for India were Dilpreet Singh (16th), Mandeep Singh (28th), Harmanpreet Singh (57th). For Wales, Gareth Furlong scored a hat-trick to snatch India's lead on three occasions (17', 45' and 58'), converting three out of the four penalty corners that Wales earned thus keeping his team's hopes alive for the better part of the match.

India captain Manpreet Singh admitted that he didn't expect the match to go to the wire.

"We didn't expect a hard (tough) game. We missed a few good chances and made it harder for ourselves. We shouldn't have given them easy penalty corners. We need to fix our defensive structure," a concerned India captain said as his team lost the lead three occasions before Sunil sealed it.

Earlier, India had begun well, putting their fierce attack on display with Akashdeep Singh driving into the left flank of the Welsh circle only a minute into the start.

His assist to Gurjant Singh saw in India winning the first penalty corner of the match. However, Harmanpreet's flick was well-saved.

Splitting points with Pakistan after a 2-2 draw in their opener, it was a must-win game for India to keep their semi-final hopes alive.

The second quarter saw experienced forward Sunil increase the ante in India's attack as he worked magic, driving in through the right flank with imploding speed.

The opening goal came when Sunil sprinted down the right flank inside the semi-circle and kept a nice pull back for Dilpreet to divert it into the goal. However, the lead didn't last long enough as an Indian infringement saw Wales win a penalty corner in the 17th minute.

"This was just not my goal. It's been a team effort and I am enjoying being part of the team. I am young and still learning to get in the right spot to score," rookie Dilpreet said.

India regained the lead in the 28th minute when Sunil earned India their third penalty corner of the match.

Though Rupinder's dragflick was saved by the Wales goalkeeper, Manpreet tried to deflect the rebound but it was finally Mandeep Singh, who got the touch to put India ahead again by 2-1.

The following quarter saw Indian dragflickers miss out opportunities of converting two penalty corner won in the 31st minute, however Welshmen did not make any such mistake when they won a penalty corner in the 44th minute.

It was Furlong, who found an equalizer yet again with a splendid conversation only to mount pressure on India.

A little earlier, in the 40th minute, India lost out on their third goal when Mandeep's deflection off SV Sunil's cross narrowly missed the goalpost.

With the scoreline even, the match went down to the wire with both teams vying for a winner in the final quarter.

A penalty corner earned in the 48th minute could not be converted by India's Rupinder Pal while Akashdeep Singh missed a deflection off Sunil's assist in the 51st minute. Missing shots on goal didn't help India's cause with time ticking away and score reading 2-2.

However, an infringement by an Indian defender in the 57th minute saw Wales being awarded a short corner.

A perfect conversion by Furlong put India under further stress. A crucial video referral appealed by India was upheld by the umpire, awarding India a penalty corner with less than two minutes for the final hooter.

After working a powerful injection, Sunil positioned himself to tap the ball home in his second attempt to seal the match for India.

I am happy with the win but not with our performance because we can do so much better than this. Though we were a better team today compared to our first match against Pakistan, we need to play our A game against Malaysia if we want to see ourselves in the Semi Final, stated chief coach Sjoerd Marijne.

India take on Malaysia in their next Pool B match, a team that heavily relies on penalty corners and on a good day can cause an upset win. After a poor conversion rate in penalty corners today where India won 13 of them, Marijne would want his team to improve on this aspect.

We cannot miss any opportunity to score and today there were plenty of those opportunities. But I am hopeful the win today will give us a good moment for the next game, he signed off.

On Tuesday, India play Malaysia in their final pool game.

Comments
Topics mentioned in this article
CWG 2018 India India Hockey
Get the latest Cricket news, check out the India cricket schedule, Cricket live score . Like us on Facebook or follow us on Twitter for more sports updates. You can also download the NDTV Cricket app for Android or iOS.