The 2014 Commonwealth Games in Glasgow saw the emergence of new Indian stars as women made their mark in the international arena. Dipa Karmakar received a grand reception on her return to India.© PTI

"It is not circus. This game demands grit, courage and lots of practice," says Dipa Karmakar. The 20-year-old girl from Tripura scripted history by becoming the first Indian female gymnast to win a medal at any international multi-discipline event.

Gymnastics is of course the ultimate test of an athlete's ability and courage. In India, the general perception about this game is, of course, nothing more than a circus. But Dipa's bronze could become a turning point for gymnastics in our country.

Dipa's story is a wonderful tale of sensational courage. Her first vault at the SSE Hydro Arena was a disaster. So when she was approaching for the second vault, the commentators were almost giggling. But she took them, us and the entire sporting world by surprise. "It is a very difficult art especially for a female gymnast. But Dipa tried very hard and did immense hard work in last three months to achieve this. I know of only three gymnasts doing two and half twist at international level -- one is from Egypt and another is from Dominican Republic," says Ashish Kumar, the only Indian gymnast to win a medal at the Asian Games.

Dipa vaulted to a bronze medal in Glasgow. It was one of the 19 India won at the Commonwealth Games. With 64 medals, including 15 gold, India finished fifth in the overall standings. Behind every medal there is a story, tales of courage, inspiration, struggle, fight and of course, of victories.

This was the fifth Commonwealth Games for Abhinav Bindra. Having won an individual gold medal at the Zagreb world championships (2006) and a historic gold at the Beijing Olympics (2008), not shooting a gold at Glasgow would have been disappointing not only for him but for his fans as well. A day before his event, Bindra announced his retirement from Commonwealth Games. He tactically tightened the screw of pressure upon himself and proved that he is the ultimate champion. 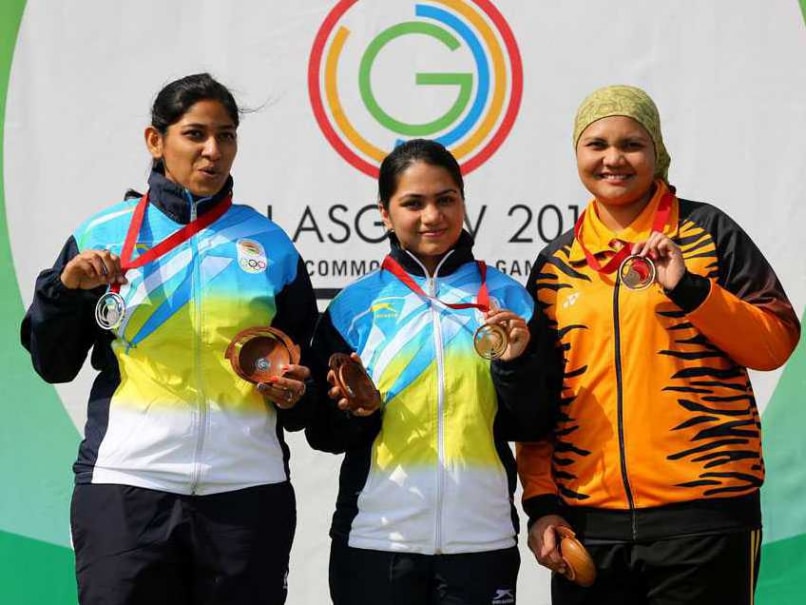 It was Bindra's last Commonwealth Games but the first for his fan, Apurvi Chandela. A 21-year-old shooter from Jaipur and a student of Jesus and Mary College in Delhi, Apurvi is a great fan of Bindra and Sachin Tendulkar. "I have learnt the art of patience from Abhinav and Sachin Tendulkar," says Apurvi. Patience is a great virtue for any shooter. Apurvi proved her shooting ability by winning gold, a classic example of a paradigm shift in Indian sport.

Malaika Goel, just 16, has a Wikipedia page under her name. In the shooting circuit, she has earned name in very little time. En route to her silver medal in the Glasgow Games, she beat former world number 1 and her hero, Heena Sidhu. Even Heena is full of praise for this young shooter. Her mother Amanpreet Goel was there at the Barry Buddon Shooting Centre in Dundee (around 90 miles from Glasgow). She was more nervous than the shooter herself. She decided not to watch Malaika's final match. She says, "Malaika's coach Gurjeet Singh saw the spark of a champion when my daughter was 10!"

Malaika's father, Sandeep Goel, a Superintendent of Police in Ludhiana, trusted the words of Gurjeet Singh. He bought a new gun and made a range in the premises of the house within a week. The father asked her daughter to choose sports as her career despite the fact that she is also brilliant in her academics (Malaika got 94.5 per cent marks in her Class X examination). The Goel family has broken a great Indian 'tradition', where the common man still believes sports is a waste of time.

Prakash Nanjappa, 38, is an amazing story of inspiration, multi talent and belief in hard- work. Prakash was a national-level badminton player and one of the first students of Prakash Padukone academy. But he twisted his leg the day he met Padukone and his badminton career was over. Prakash tried his luck in motorsport. Then he went to Canada to work there as a software engineer. But he would always tell to himself and his father that shooting was his ultimate target.

Last year, Prakash went to Grenada in Spain for a World Cup tournament. During the tournament, he suffered a facial paralysis called Bell's palsy and many thought that his career in shooting was also over. But his courage kept blazing like his gun and he again started hitting the target. Within three months, he won silver in the Asian air gun championship in Tehran. He won a silver in Glasgow Commonwealth Games.

Double Olympic medallist Sushil Kumar had a lot to prove -- to his fans and to himself. He fought in the 74 kg weight category while earlier he used to fight in 66 kg weight division. Had he not won the gold again in Glasgow like 2010 Delhi Commonwealth Games, many of us would have easily written him off. And then again he has to challenge himself in 70 kg weight category in Incheon Asian Games in September 2014. Sushil has again fearlessly accepted the challenge.

Women wrestler Vinesh doesn't have a job. Her father is no more. So her uncle and father of Olympian wrestler Geeta Phogat took her to an Akhara (traditional mud pit for wrestling). Before going to Glasgow, Geeta told Vinesh, "Don't come back home without gold." Not only Vinesh (48kg weight category), her sister Babita (55kg weight category) too were unstoppable in Glasgow. Both sisters went back home in village Ballai with gold medals. 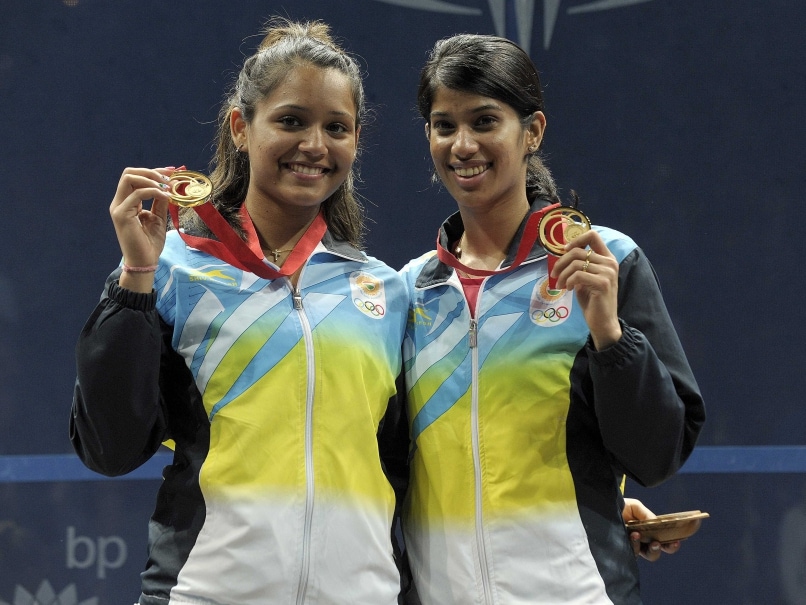 Gold medallists Dipika Pallikal (L) and Joshana Chinappa pose on the podium with their medals after winning the women's gold medal match in the Women's Doubles Squash competition.

Then there was discus thrower Vikas Gowda, who clinched a gold medal 56 years after Milkha Singh's gold in Cardiff in 1958. This is the first gold in track and field for India after Milkha historic and oft-quoted victory. Shuttler Parupalli Kashyap finally broke through the quarterfinal barrier. He made the last eight at the London Olympics in 2012 and the world championships. In the 2010 Commonwealth Games, he had won bronze. This time, it was the yellow metal. Both Gowda and Kashyap are struggling for the lack of sponsorships. Even after their historic win they are skeptic about the market. But they are sure of one thing that their medals will surely inspire their fellow athletes and youngsters.

Three weightlifters put Kurundwad, a small town in Maharashtra's Kolhapur district, on the world map. Ganesh Mali (56 kg), Omkar Otari (69 kg) and Chandrakant Mali (94kg) made their 55-year-old coach Pradeep Patil a proud and famous man overnight. Patil owns a small and basic gym called Hercules Gym in Kurundwad, which celebrated the victory of their heroes by distributing sweets (pedas) and by organizing an elephant parade.

Mali says that now every villager would want their children to become a weightlifter. Omkar Otari becomes emotional while talking about his coach's contribution in his success. Omkar says, "When my father died, Pradeep sir told me that I have become his son," Omkar adds, "and he has kept his words ever since."

We can't miss the story of great comebacks of veteran shooter Gagan Narang and the likes of Vijender Singh. Eight-nine months ago, Narang was suffering from severe back spasm. He thought his career was over. Having won eight Commonwealth gold medals (2006 and 2008), Narang could easily have skipped Glasgow. But he competed with the top shooters and came out victorious. He says, "It's like a Gold medal for me."

After having entered Bollywood and his boxing career under the scanner after a drug scandal, many thought Vijender Singh's career was over. But the rock star of Indian boxing managed to punch his way to a silver medal to better his bronze in the Delhi Games.

For almost two weeks, Indian sportspersons in Glasgow made news for all the good reasons while their super-hero cricketing counterparts huffed and puffed not very far away.

Comments
Topics mentioned in this article
Other Sports CWG, 2014
Get the latest updates on IPL 2021, check out the IPL 2021 Schedule and Indian Premier League Live Score . Like us on Facebook or follow us on Twitter for more sports updates. You can also download the NDTV Cricket app for Android or iOS.