Anand trails Carlsen by two points to four with six matches left to play. The first player to win 6.5 points wins the championship. The Indian Grand Master played with white pieces on Saturday. 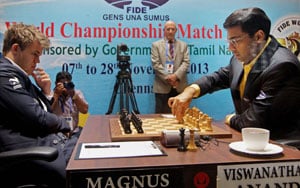 World champion Viswanathan Anand struggled once again with his white pieces and suffered a painful defeat against challenger Magnus Carlsen of Norway in the sixth game of the world chess championship here on Saturday.

After a shocking loss from a drawn position in the fifth game, Anand looked prepared to strike back but the Berlin defense yet again came in his way as Carlsen demonstrated his superior skills on the board once more in a drawn endgame to beat the world champion.

The Indian is now at a make-or-break situation and the next game will be most crucial to the final outcome of the match. As things stand, after six games and half way through, Carlsen leads the match 4-2, needing just 2.5 points more from next six to become the next world champion.

Anand had his hopes pinned on the king pawn but the Berlin defense has troubled the best players in the world in the last decade.

Team Anand had not found anything in the main line and it was evident from the fact that Anand went for the closed Ruy Lopez, often a simple reprieve when one wants to avoid the intricacies of the Berlin defense. Anand decided to try his chances in the middle game arising out a close variation.

Carlsen was game for it if the opening and middle game was any indication. The Norwegian gave nothing away and by the 20th move it was a level position on board for Anand with not much to look up to.

However the match situation suggested otherwise, Anand had to play on for a win and that's what he decided to do, unfortunately the plan boomeranged.

Carlsen, with his immaculate understanding of almost all kind of positions, neutralized white's initiative in the middle game and when a queen and rook with pawns endgame arose on the board, it was already clear that the Norwegian was calling the shots.

Pushed back on the defensive third time in as many games as white, Anand fumbled, probably this might be the costliest fumble for him ever, as he allowed Carlsen to get a pawn plus rook endgame.

Theoretically the position was still drawn, but then that was the case in the prvious game of the match too. Yet again, Carlsen provoked Anand to do something to solve matters quickly and the defending champion realized how hard it is to achieve it against the 'Mozart of chess'.

The endgame was drawn till move 56 according to the experts of the game. Then Anand made one mistake after another and it was all over 11 moves later.

In the post game conference, Carlsen said he is happy to have a healthy lead at the half way stage in the match.

Anand needs to do everything right to be back in the match. Things look very difficult for the Indian as of now, especially after two back-to-back losses from drawn endgame.