Vijender Singh, who won his pro-bout over the weekend, has told NDTV that he is keen to return to the ring at the Tokyo Olympics. 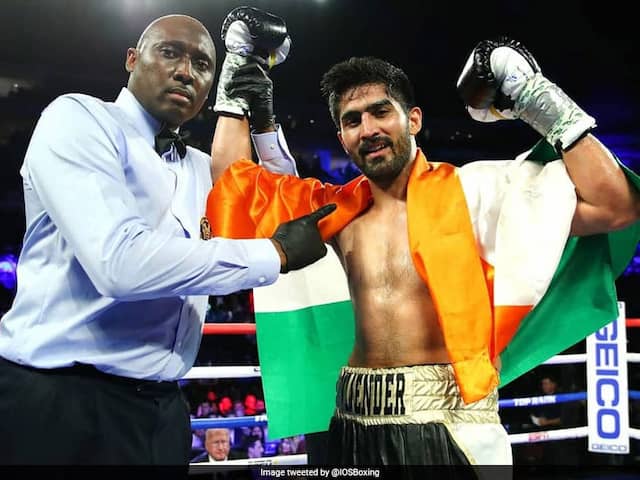 Olympic medal winner boxer Vijender Singh who won his pro-bout over the weekend, during his US debut, has told NDTV that he is keen to return to the ring at the Tokyo Olympics and fight for an Olympic Gold. This will now be possible since the International boxing federation has allowed professionals to participate in boxing. Despite concentrating on his pro-boxing career, Vijender is keen to stage a return to politics as well

Rica: Vijender, this fight vs Mike Snider happened after 500 days. What were you doing in between, why were no fight planned?

Vijender: First we signed up with an UK promoter, then we flew to USA. I was scheduled to fight in March-April but it was postponed due to my injury. I know what's happening behind the scenes and I keep my fans updated on Facebook. Glad that the fight finally happened

Rica: So how different is it fighting in USA from fighting in UK, because you've done the UK circuit for a long time now.

Vijender: It's boxing and it's pure boxing you know, USA is like mecca of boxing. All the top athletes come to USA and try to prove they are the best. We are there now so hope we survive long.

Rica: And for India you are, not the next big thing but the big thing, how far are you from winning the world title?

Vijender: We are talking to our promoters Neerav and Bob Arum have plans, big plans and hopefully, we get the world title next year.

Rica: You ended with a bronze medal in Beijing so will you give a shot for gold in Tokyo 2020? The international boxing federation rules have changed now?

Yeah, rules have changed now and hopefully if i get a chance to represent India in Olympics, I will go for it.

Rica: And what are the chances that you will fight the qualification and get into the team? Have you spoken to the coaches?

Vijender: I didn't speak to anyone, I just landed last night. I just want to be a part of Indian team and represent India in Olympics, so if I get a chance anyhow, I'll just go for it.

Rica: There is a famous Shah Rukh Khan dialogue from the film Bazigaar about losers. How would you define your loss in the general elections?

Vijender: I wanted to tweet 'haar ke jitne waale ko Vijender Singh kehte hain,' and put a picture in the SRK pose. That was a learning experience and I will do it again

Rica: Will that happen with boxing?

Vijender: Boxing is my job. People know me as a boxer.. I do not have to like spend all the time with them, I just need to do my job.

Rica: But what is the motivation? Why do you want to win an election and be a public representative.

Vijender: I've seen the struggle because I came from a small village and I am living in like a Delhi now which is one of the best cities in the world. I want people to face less challenges than I did, so I want to do that thing. If I get the chance anyhow, I will go for it.

Rica: Over 500 days we waited for your, between your 10th and 11th fight. How long do we wait for the next one?

Vijender: We will go for the next one between September and October depending on that schedule