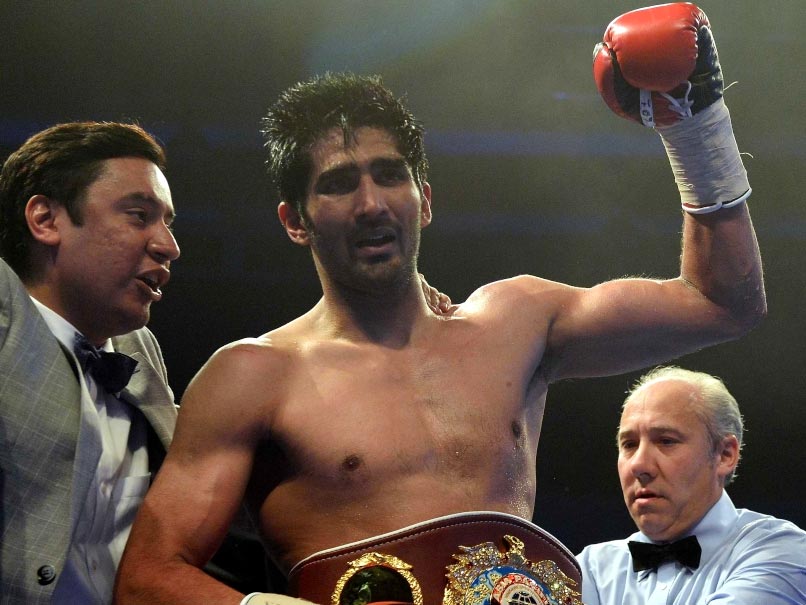 Vijender Singh started off cautiously in the first couple of rounds but soon picked up momentum by landing a couple of heavy blows. To Zulpikar's credit, Vijender didn't have it easy as the Chinese boxer used his left hand to good effect and soon came back strongly in the next couple of rounds. Zulpikar was penalised by the referee for taking an unsporting shot at Vijender and that turned out to be crucial in the context of the match as Vijender won the bout by a very small margin. The Indian boxer clinched his second title and kept his unbeaten record intact by retaining the WBO Asia Pacific Super Middleweight title and also claiming the WBO Oriental Super Middleweight title.

Vijender Singh is the champion!

22:15 IST: The verdict is out. Vijender Singh has done it once again. While the Indian might have taken a lot of blows but he stood his ground and connected when it mattered the most.

22:11 IST: A lot of heavy blows from Zulpikar. Vijender Singh was struggling in the last round. It would not be a surprise if Zulpikar comes out as the winner.

22:07 IST: Vijender lands a couple of great punches as blood pours out of his nose. Zulpikar quick to come back too. Vijender's nose has been battered, bruised and broken it seems. End of the ninth round.

22:02 IST: A very skilful Zulpikar throwing in jab after jab. Vijender looks a bit tired here. The eighth round comes to an end with the Indian looking in a spot of bother. Ends the round with a bloody nose.

21:59 IST: Another evenly fought round comes to an end. This one is going right down to the wire.Three more rounds to go.

21:55 IST: End of the sixth round. There is nothing to choose between the two at the moment. The Chinese boxer is using his left hand to good effect though and the Indian needs to be wary of that.

21:52 IST: Zulpikar loses a point for his third low blow. In a tight contest that can turn out to be crucial.

21:50 IST: Great comeback from Zulpikar. He is doing quite a lot of damage with his left hand. Vijender has been hurt in that fifth round.

21:46 IST: Very little to choose between the two at the moment. While Zulpikar landed a couple of good blows, Vijender gave it back in style. After the end of the fourth round, Vijender is slightly ahead at the moment.

21:41 IST: Zulpikar now comes back with a couple of punches. Another round comes to an end. It is still an even contest at the moment.

21:37 IST: End of the second round. A round where both the boxers have exchanged blows but Vijender had got one right on the money.

21:36 IST: Zulpikar rocked a bit as Vijender lands a couple of great blows.

.@boxervijender looks in great shape & is throwing some amazing punches at Zulpikar!

The Chinese is reverting strongly! #BattleGroundAsia

21:33 IST: Both the boxers started off on a defensive note in the first round.

21: 22 IST: Zulpikar Maimaitiali making his way out to the middle.

21:10 IST: Time for the big match. Both the boxers are of the same height which means no one has a height advantage here.

21:00 IST: So we are just minutes away from the main event. This is the fight everyone is waiting for. It will be India's Vijender Singh up against China's Zulpikar Maimaitiali. This is where winner takes it all. While Vijender will be defending his WBO Asia Pacific super middleweight title, the WBO Oriental super middleweight will also be up for the grabs for the Indian if he manages to win the fight.

20:49 IST: Neeraj Goyat has done it in what was a very difficult match for the Indian. Goyat came back strongly and won through unanimous decision. It was in the last three rounds that the Indian really got his act together. Goyat defends his WBC Asia Pacific welterweight title.

20:47 IST: We are done with the final round. We will soon have the winner.

20:45 IST: The Indian has shown great intent in the tenth and eleventh round by landing a couple of clean punches. Will it be enough for Goyat. We will have to wait and see.

20:35 IST: The Indian needs to land a couple of blows quickly here to change the course of the match. At the moment it seems like Tanada running away with the match. We are done with the ninth round.

20:31 IST: Goyat is trying to make his way back into the match. This has been a great bout so far with both the boxers not giving an inch. End of the eighth round.

20:28 IST: This might go the distance. Both Goyat and Tanada are looking a bit tired. End of the seventh round with Tanada having a clear advantage of winning the fight.

20:24 IST: The sixth round saw both the boxers in defensive mode.

20:19 IST: Both the boxers were a tad defensive in the fifth round. Tanada of Philippines still better placed than the Indian.

20:14 IST: Goyat landed a couple of punches in the fourth round. It was a good round for the Indian but Allan Tanada of Philippines still has the upper hand in the fight.

20:10 IST: Tanada was far more aggressive in the third round. Goyat still hanging in there.

20:05 IST: There is nothing to chose between both the boxers at the moment. End of the second round.

20:00 IST: Goyat looks to be a bit defensive in his approach but so far it is working for the Indian. End of the first round. This is the first title fight of the night and it will be of 12 rounds.

19:50 IST: The next bout is about to get underway. India's Neeraj Goyat will be up against Phillippines' Allan Tanada. Goyat will be defending his WBC Asia Pacific welterweight title.

19:30 IST: Akhil Kumar who also made his pro debut tonight got off to a winning start by defeating Australia's Ty Gilchrist in Junior Welterweight category via TKO.

Crowd favourite @Akhilkumarboxer makes his debut a memorable one as he wins the Junior Welterweight category! #BattleGroundAsia pic.twitter.com/mLRuujWtXs

19:10 IST: The second fight of the night saw both the Indian boxers Kuldeep Dhanda and Sachin Bhot take on each other. After a close fight, Dhanda got the better of Bhot.

19:00 IST: Hello and welcome to the coverage of the Battleground Asia event held in Mumbai.

Having fought in Indian colours for many years, Vijender has had a memorable professional career as well.In his previous eight bouts, Vijender defeated Sonny Whiting, Dean Gillen, Samet Hyuseinov, Alexander Horvath, Matiouze Royer, Andrzej Soldra, Kerry Hope and Francis Cheka.But according to the Beijing Olympic medallist, his ninth professional bout against China's Zulpikar is going to be the easiest of all.The official weigh-in and the face-off for the bout happened on Friday.

Apart from Vijender's bout, the Olympian duo of Akhil Kumar and Jitender Kumar will also be making their professional debuts on Saturday.

Comments
Topics mentioned in this article
Vijender Singh Boxing Live Blogs
Get the latest updates on India vs England Series, India vs England , live score and IPL 2021 Auction . Like us on Facebook or follow us on Twitter for more sports updates. You can also download the NDTV Cricket app for Android or iOS.