The 24-year-old Srikanth said he doesn't think much about his opponents as he believes it is all about how he conducts himself during the match. 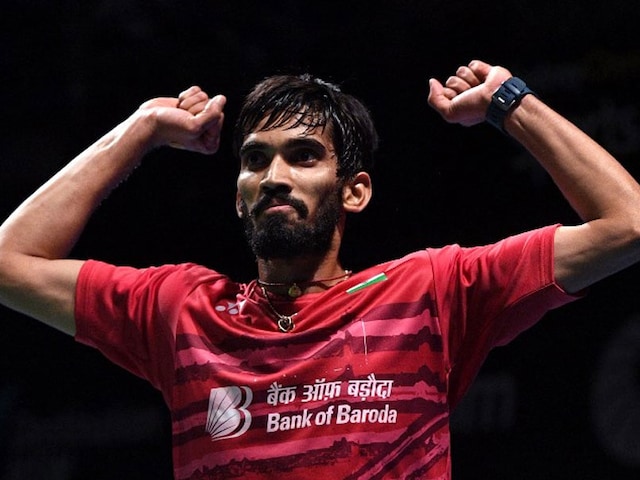 Srikanth said he would have to go full throttle from the opening round itself.© AFP

With successive Super Series titles to his credit, Kidambi Srikanth might be a strong contender at the World Championship but the Indian ace says he isn't counting his chickens before they hatch. Despite making three back-to-back final appearances, Srikanth said he wants to start with a clean slate and would not even think of lowering his guard at the World Championship where the field boasts of the cream of World badminton. "I am really playing well and I am confident. But everyone comes with their full fitness for such a big event. So for me it is not about thinking what I would do if I reach final but about how I will play in the first round," Srikanth told PTI.

"I got a big break after the three events. After such a break the first rounds are also very tough, so I was taking it match by match and I didn't set any targets," added the Indian, whose mid-season surge saw him rise to the top of the Destination Dubai Rankings.

Srikanth said he would have to go full throttle from the opening round itself as even a slight dip in performance can cost one a match at such a big event.

"Every opponent is different and all the top 20 are playing well and it is about playing 100 percent from the first round itself," said the former World No. 3, who will face Russian Sergey Sirant in the first round of the Glasgow event starting from August 21.

"When you play an unseeded player, he doesn't have anything to lose while you will have pressure, so you can't expect to win if you play at 90 per cent."

The 24-year-old from Guntur said he doesn't think much about his opponents as he believes it is all about how he conducts himself during the match.

"I don't really want to think what others are thinking, I just want to think about my game. It is not about others, it is about me, what I feel during a match and how I really play my best during the match," the eighth-seeded Indian said.

"I am a person, who believes that it is 90 per cent hard work and 10 per cent luck, which is like believing in God. So during a match, it is 90 per cent my hard work, and rest 10 percent is about luck. At 20-19, there is not much to plan, you depend on luck for your opponent to make some mistake," he explained.

Asked if there would be pressure, Srikanth said: "These big events will have pressure because people will want to do well, so there will be definitely pressure but I can only think about doing well."

A Roger Federer fan, Srikanth said the legend's win at the Wimbledon inspired him.

"It is always a big motivational factor for me to see Federer make a comeback from injury and win a Grand Slam at this age. His will is very strong, he was dominating everyone. He really let loose in the Wimbledon and winning it without losing a set. Those scores, beating a younger opponent in final, these are big inspiring factors," he said.

Srikanth, who made the quarterfinals at Rio Olympics, had suffered an ankle injury at the Japan Super Series in September last year. He played at Korea and Macau before going back to work on his fitness.

He had a good run at the Premier badminton League but big results continued to elude him as he failed to defend his title at the Syed Modi Grand Prix Gold and made first round exits at All England and India Open.

On his injury phase, Srikanth said: "That was a very good time for me to take time off badminton and focus on what was going around and I think I really got time to do the kind of strengthening stuff.

"I got to know my body well and it has helped me to predict what is going to happen. It was my first brush with injury and it was the longest break that I had since 2009."

Talking about his early days, Srikanth said: "I joined the Gopichand academy in 2009 when I was 16. I always had my brother (K Nandagopal) with me so I never felt that I am away from family.

"Initially badminton was a hobby for me. I liked playing sports but it was always fun for me. I became really serious when I joined the academy. Earlier, I never gave much thought to the training but after I joined academy I had to think about the off court stuff. So I started late in a way compared to what we see now as athletes now start early."