Indian men's badminton team created history when they upset 14-time champions and holders Indonesia 3-0 to clinch their first ever Thomas Cup title in Bangkok on Sunday. 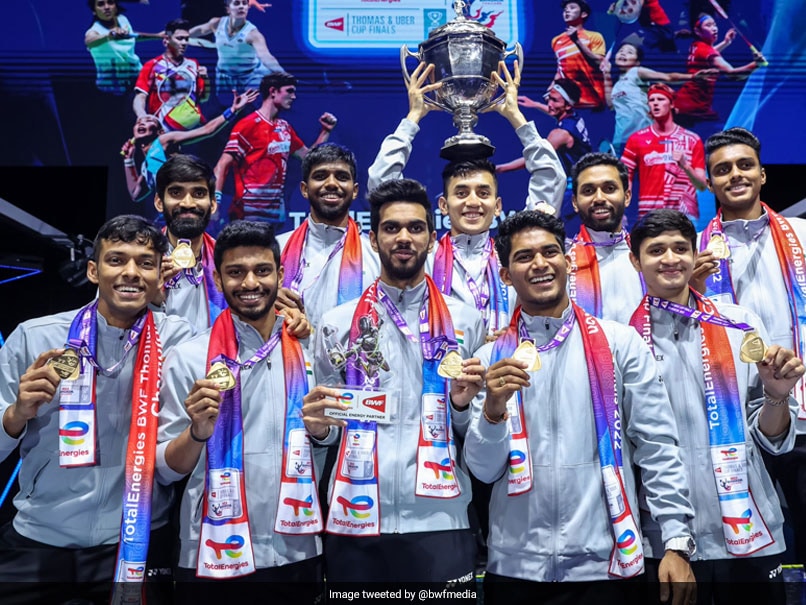 Indian men's badminton team created history when they upset 14-time champions and holders Indonesia 3-0 to clinch their first ever Thomas Cup title in Bangkok on Sunday. The underdogs, who had not reached the last four stage of this prestigious tournament since 1979, had assured themselves of a medal by beating Malaysia on Thursday and then got the better of Denmark in the semi-finals with both matches going to the wire.

"It's a very proud moment for Indian badminton. We have had many individual triumphs but winning the Thomas Cup crown is very special. This shows the depth of talent we have among the men and full credit to the players and coaching staff for giving their ultimate best through this week and beating some of the biggest badminton powerhouses on their way to the title win," said Himanta Biswa Sarma, President, Badminton Association of India in a statement.

Himanta Biswa Sarma, the Chief Minister of Assam, also talked to the team after their win. Talking about the same, he said: "Delighted to speak to the victorious Indian Badminton team after their historic win in Bangkok. While I was speaking to the team members, the roar of Bharat Mata Ki Jai in the stadium gave me goosebumps."

"A proud moment for every Indian. To celebrate this momentous occasion, on behalf of a grateful nation Badminton Association of India is honoured to announce a prize money of Rs 1 crore for our players and Rs 20 lakhs for our support staff. We look forward to several such national accomplishments in the coming months & years," he added.

World No. 23 HS Prannoy had justified the selectors decision to pick directly in the squad by winning both the deciding rubbers and remained undefeated, especially the second against Rasmus Gemke of Denmark despite hurting his ankle in the opening game.

He was declared fit to play the fifth rubber again in the final but the likes of Lakshya Sen, the men's doubles combination of Satwiksairaj Rankireddy and Chirag Shetty and Kidambi Srikanth ensured that he could just put his foot up and enjoy the triumph.

"There are no words to describe my feeling after India's title triumph. The selectors showed faith in the senior players and their form while the youngsters showed that they can step up and take responsibility. I am confident that this title triumph would only encourage young players to dream big but also be a new chapter for Men's badminton in the country," said Sanjay Mishra, General Secretery, BAI.

Given, Indonesia's doubles prowess, it was important for Sen to give them a winning start and the World Championships bronze medallist did just that as he fought from a game down to beat Anthony Ginting 8-21, 21-17, 21-16 in an hour and five minutes.

The Olympic bronze medallist ran riots from a favourable side as he clinched 12 straight points on either side of the mid-game interval to draw first blood.

But Sen wasn't the one to fold up without a fight and started to come in his own after changing ends. He was patient in his approach and forced Ginting to make errors while looking for quick points.

And India Open champions Satwiksairaj Rankireddy and Chirag Shetty saved four match points in the second game before defeating Mohammed Ahsan and Kevin Sukamaljo 18-21, 23-21, 21-19 to make it 2-0 in India's favour.

The Indonesians had fielded a scratch combination against the Indians and it looked like their ploy was working as they raced to a 18-12 lead in the opening game. But the Indians managed to find their rhythm and claw back before the experienced combination drew first blood.

Nerves played their part in the decider as the lead changed hands a couple of times before the Indians clinched two quick points to take a 21-18 lead. Ahsan played out of his skin to save one but the Indians converted the second to set the stage for Srikanth to wrap up the final.

The former world No. 1, who completed the tournament without losing a single match, then came to the party as he clinched the opening game rather easily and then saved two game points in the second before getting the better of Jonathan Christie 21-15, 23-21 as the team launched into a frenzied celebration.