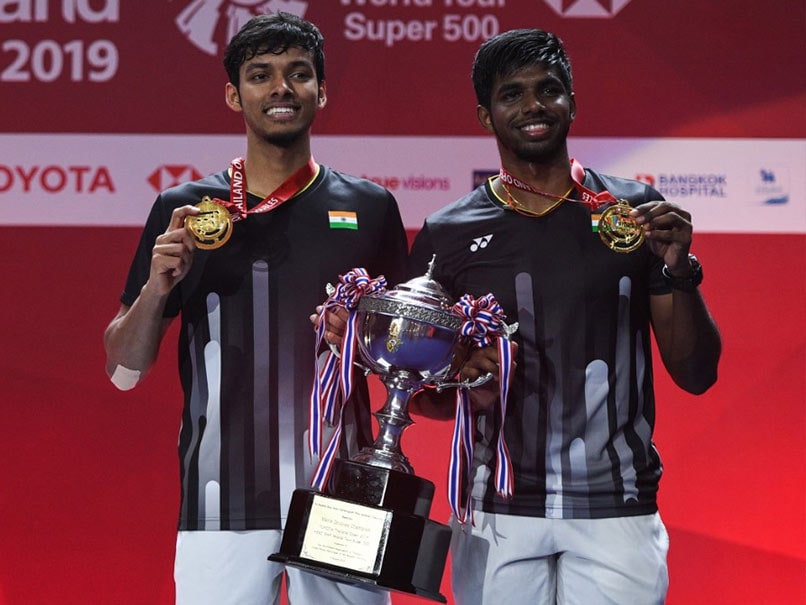 Satwiksairaj Rankireddy and Chirag Shetty made history by claiming their first-ever Super 500 title, beating third-seeded Chinese pairing of Li Jun Hui and Liu Yu Chen in the men's doubles final at Thailand Open on Sunday. The Indian pair, who were unseeded in the tournament, went into the final as massive underdogs against the Chinese duo, who had won the World Championships and the BWF World Tour Finals last year. But the Indian duo were far from overawed, putting in a scintillating performance to upset the odds. In the end, Rankireddy and Shetty won 21-19, 18-21, 21-18 to clinch the Thailand Open title.

The Indian team got off to a brilliant start and led 11-9 at the mid-break interval of the first game. Despite Li Jun Hui and Liu Yu Chen drawing level at 13-13, Rankireddy and Shetty never gave up the lead, staying marginally ahead in the closely-fought first game.

At 18-18, the Indian pairing won two crucial points to open a small gap and held off the Chinese to claim the opening game 21-19.

Just like in the first game, the Indian duo got off to a fast start in the second game, taking a 4-1 lead. Li Jun Hui and Liu Yu Chen did manage to fight back but Rankireddy and Shetty still went into the mid-game break 11-9 in the lead.

With not much to separate the two teams, they traded leads until the Chinese pair won three points on the trot to wrap up the second game and take the final into a decider.

In the final game, it seemed the third seeds had the measure of their opponents as they took a 6-3 lead but Rankireddy and Shetty didn't give up and fought their way back to once again go into the mid-break with a 11-9 lead.

The Indians held the lead for the latter half of the game with the Chinese pairing playing catch up. However, Rankireddy and Shetty held off the Chinese charge to take the game and the title.

Comments
Topics mentioned in this article
Badminton
Get the latest updates on India vs South Africa and check out  Schedule, Results and Live Score. Like us on Facebook or follow us on Twitter for more sports updates. You can also download the NDTV Cricket app for Android or iOS.