In the video, ace badminton player Saina Nehwal's mother looks happy as they fuss over their dog. 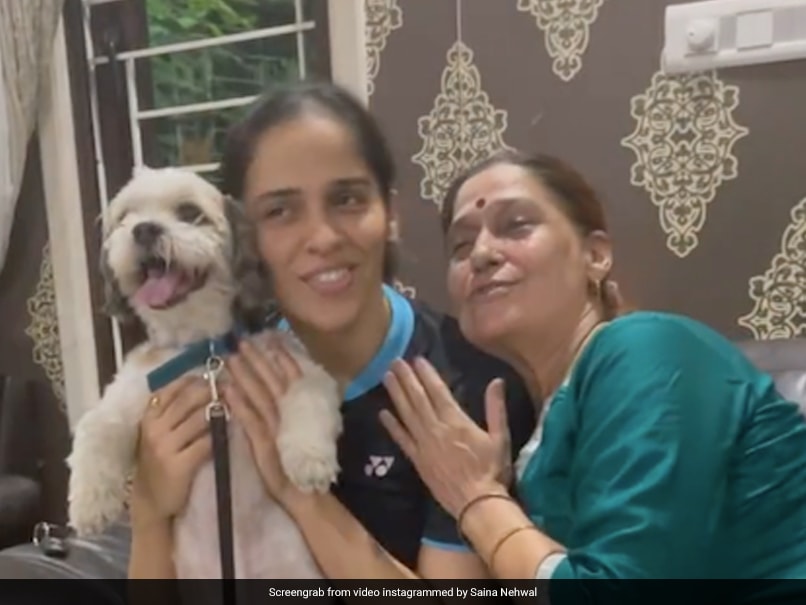 Saina Nehwal posted a video with mother and her dog on Instagram.© Instagram/Saina Nehwal

Badminton star Saina Nehwal on Thursday shared an adorable video with her dog on Instagram. In the short clip, the former badminton world number one can be seen sitting on a sofa and pampering her fluffy friend along with her mother, Usha Nehwal. As adorable as the ace Indian shuttler's pet looks, it's Saina's mother who stole the show. Usha looks delightful as well as clueless in the video. One moment she is pampering the puppy and the next she is seen showering Saina with love. "Puppy love," Saina captioned the photo, along with three heart emojis.

The video was a huge hit among Saina's followers. At the time of writing, over 68,000 people had watched it.

Meanwhile, Saina's chances to qualify for the Tokyo Olympic Games took a further blow earlier this month after the Malaysia Open Super 750 tournament, one of badminton's last two Olympic qualifying events, was postponed due to rising COVID-19 cases in the host country.

The Malaysia open was slated to be held in Kuala Lumpur from May 25 to 30.

Earlier, the India Open, which was also an Olympic qualifying event, was postponed due to a surge in COVID-19 infections in India. The last of three qualifying events for this years' Summer Games, Singapore Open, is scheduled to take place from June 1 to 6.

However, Singapore has suspended all flights from India as the country continues to battle the second wave of the pandemic.

Earlier, the Badminton Association of India (BAI) had informed Indian players that in order to qualify for Singapore Open, they will have to self-isolate themselves in any foreign country for 14 days.

"Alternatively, all players have to maintain a 21-day quarantine in Singapore," BAI had said in a statement.

So far, Olympic silver medallist PV Sindhu, B Sai Praneeth and the men's doubles pairing of Chirag Shetty and Satwiksairaj Rankireddy have qualified for the Olympics from India.

Comments
Topics mentioned in this article
Saina Nehwal Badminton
Get the latest updates on India vs South Africa and check out  Schedule, Results and Live Score. Like us on Facebook or follow us on Twitter for more sports updates. You can also download the NDTV Cricket app for Android or iOS.