Kidambi Srikanth Strolls Into Second Round Of World Badminton Championships

Kidambi Srikanth, seeded eighth, will next take on Frenchman Lucas Corvee on Tuesday. 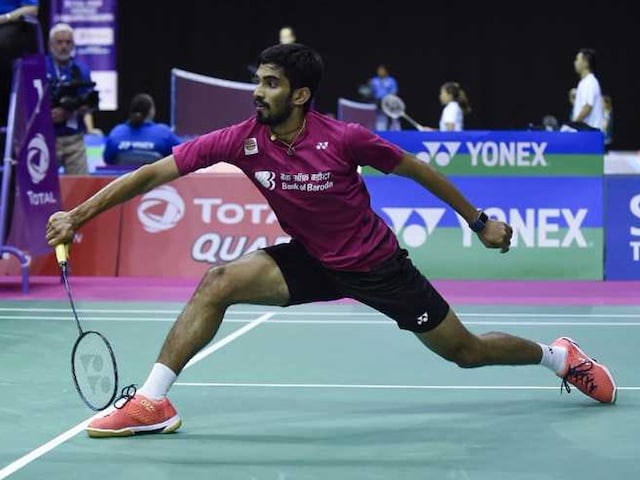 Kidambi Srikanth advanced to the 2nd round with a straight game win over Sergey Sirant.© AFP

Kidambi Srikanth made a winning start to his 2017 World Badminton Championships, disposing off Sergey Sirant in the opening round without much fuss. The Indian shuttler marched into the second round of the men's singles event on Monday with a straight game 21-13, 21-12 win over the Russian in a match that lasted just 29 minutes. Srikanth, seeded eighth, will next take on Frenchman Lucas Corvee on Tuesday.

The Indian shuttler is coming at the back of some sterling performances, having won the Indonesia Open Super Series Premier and the Australian Open Series, and is a big hope for a medal at the World Championships.

Srikanth made a nervy start in the opening round match as he missed a few points but his smart net play and precise smashes helped him open up a 11-6 lead at the break.

The first game became a foregone conclusion as Srikanth raced into a 15-7 lead and then quickly wrapped it up to take a 1-0 lead.

The second game went much in the same manner as the first with Srikanth zooming to a 11-5 deal after a cagey beginning. The Russian seemed to put up a better fight with the rallies lasting longer but still proved to be no match to Srikanth.

The Indian star opened up a 19-10 lead and though he lost two straight points he made it up by winning two consecutive points of his own to take the match in straight games.

Sameer Verma, who won the Syed Modi Grand Prix Gold in January, also reached the second round after his opponent Spain's Pablo Abian retired midway with the score reading 21-8 17-4 in favour of the Indian.

He will meet either England's Rajiv Ouseph or Czech Adam Mendrek in the next round.

Another bright spot for India was the performance of Tanvi Lad, who fought back to beat England's Chloe Birch 17-21, 21-10, 21-19 in the women's singles first round.

The young Indian faces a much stiffer challenge next as she runs into second seed Sung Ji Hyun of South Korea.

Saina Nehwal and P V Sindhu will open their campaign on Tuesday, having got byes in the first round.