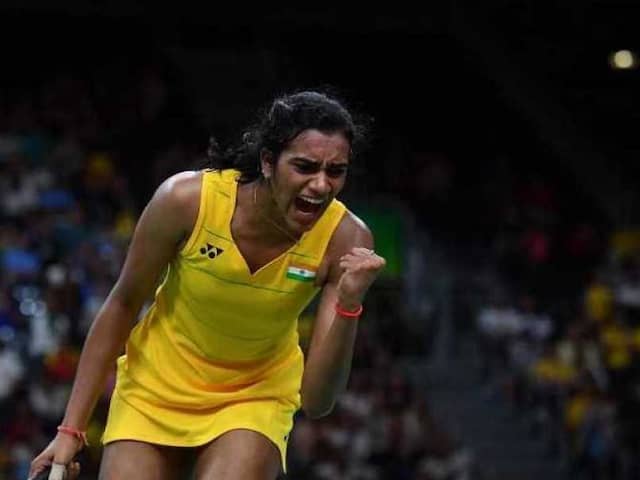 Star Indian shuttlers Kidambi Srikanth and PV Sindhu overcame their respective counter-part to advance to the next rounds in the Badminton World Championships 2018 on Wednesday. Srikanth unseeded Pablo Abian from Spain 21-15, 12-21, 21-14 in a marathon match which lasted for an hour and two minutes. The fifth seeded Indian took the first game in the men's singles tie of the Badminton World Championship 2018 with ease before losing in the second game. The Guntur player Srikanth, was put under consistent pressure as the Spaniard displayed some brilliant play to take the tie to the decider. However, in the third game, Srikanth maintained his calm as Abian made some unforced errors to clinch the match and proceed to the next round. Meanwhile, Sindhu displayed dominance against unseeded Fitriani from Indonesia to clinch both the games with ease and enter the third round.

16:45 IST: Thank you for joining us on all the action, until next time, it's goodbye!

16:27 IST: A lot to learn for the teenager Fitriani from the match, coming up against 2016 Olympic silver medallist Sindhu -- who now inches closer on booking a spot in the third round with a 19-9 lead in the second game.

16:21 IST: Fitriani finds the net and then tries to play a long shot which lands way outside the court, allowing PV Sindhu to stretch her lead to 11-5 in the second game, which looks decisive.

16:19 IST: PV Sindhu has a five-point advantage over Fitriani in the second game. She leads 8-3.

16:16 IST: Fitriani with a deft touch, the shuttle drops away from Sindhu -- who tries to stretch herself but fails to get a touch on it. The Indonesian leads 3-2 in the second game.

16:14 IST: Long rally to open the second game, Sindhu takes the first point. We saw a glimpse of Sindhu's brilliant play from her back-hand.

16:11 IST: PV Sindhu closes the first game 21-14 in 16 minutes. She dominated the opening game from the onset, Fitriani on the other hand tried too hard but failed to outclass the third seeded.

16:08 IST: Fitriani plays two back-to-back smashes, the second one too good for Sindhu to pick up. The Indonesian trails 10-18.

16:01 IST: PV Sindhu tries to play with soft hand, but the shuttle hits the net. Fitriani pulls one point back to trail 6-10.

15:58 IST: In the men's singles, Sai Praneeth is in action against Spain's Luis Enrique Penalver.

15:50 IST: Third seeded PV Sindhu and 19-year-old Fitriani, who is unseeded in the World Championship have taken the centre court.

15:27 IST: Another set-back of the day for India! Women's doubles pair of Ashwini Ponappa and N Sikki Reddy crash out. They lose to second seeded pair of Yuki Fukushima and Sayaka Hirota from Japan 14-21, 15-21 in 37 minutes.

14:58 IST: In the women's doubles, Ashwini Ponappa and N Sikki Reddy trail 4-11 at the mid-game interval of the first game.

14:47 IST: HS Prannoy suffers defeat in the second game 16-21 against Ygor Coelho after clinching the first game 21-8 with ease. We head to the decider now.

14:11 IST: Satwik Rankireddy and Chirag Shetty clinch the second game 21-15, we are going to witness a three-game thriller here.

14:09 IST: In the men's doubles, Satwik Rankireddy and Chirag Shetty after losing the first game, now lead the second game by a slender 17-14 margin.

13:27 IST: India's men's doubles pair of Satwiksairaj Rankireddy and Chirag Shetty are in the centre court to play against Danish eighth seeded duo of Kim Astrup and Anders Skaarup Rasmussen.

09:15 IST: Some highlights from the Kidambi Srikanth versus Pablo Abian three-game thriller of a contest.

08:40 IST: Kidambi Srikanth with a soft touch, wins the decider 21-14 in 26 minutes. The fifth seed made a terrific comeback after losing out on the second game.

08:38 IST: Brilliant returns from Kidambi, takes three consecutive points. He inches near on closing the game, Srikanth has a five-point lead now, 18-13 in the decider.

08:29 IST: Two full length dives from Kidambi, not enough to keep Abian from taking the point. He looks to be in form of his life. Putting the Indian on pressure.

08:26 IST: Kidambi Srikanth challenges for out, but the review shows that the challenge is unsuccessful. Abian has put a breathing space between him and Kidambi, now leads 9-6.

08:23 IST: Pablo challenges but umpire denies the review, suggests the Spaniard was late to react on that shot. Meanwhile, Srikanth has come from behind to take a 6-4 lead in the deciding game.

08:22 IST: Fine return serve from Kidambi to bring the score on level terms.

08:20 IST: Kidambi Srikanth hits the net, Pablo earn a hard earned point. He has been on fire since the second game. Pablo 3-2 Srikanth in third game.

08:15 IST: Pablo Abian nears on closing the game, but Srikanth pulls two back to back points to trail 12-20.

08:13 IST: Pressure on Kidambi clearly shows, he nets the shuttle, makes an unforced errors. Infact, now two in a row. The Spaniard leads 18-10.

08:12 IST: Terrific Rally! Pablo keeps his calm to maintain his lead in second game, his lead is now stretched to 15-10.

08:00 IST: Hello and welcome to the live commentary from the match between Kidambi Srikanth and Pablo Abian.

The Hyderabad-based Indian is expected to face a tougher challenge in the next round where she will meet an experienced opponent in fourth seed Ratchanok Intanon of Indonesia. Ratchanok staged a strong comeback to win a tough encounter against the impressive Mia Blichfeldt of Denmark. The nail-biting see-saw battle, which lasted an hour and 16 minutes, saw Ratchanok carve out a 16-21, 22-20, 21-10 victory. Meanwhile, Srikanth defeated the Irish 21-15, 21-16 in 37 minutes. Srikanth looked the better of the two shuttlers from the onset, but the Irish showed some resilience to take a slender lead in the first game before Srikanth came from behind to close it with ease.

Listen to the latest songs, only on JioSaavn.com
Comments
Topics mentioned in this article
Kidambi Srikanth PV Sindhu Live Blogs Badminton
Get the latest Cricket news, check out the India cricket schedule, Cricket live score . Like us on Facebook or follow us on Twitter for more sports updates. You can also download the NDTV Cricket app for Android or iOS.