Australia vs India: Rohit Sharma, Ravichandran Ashwin's Banter On Cheteshwar Pujara Will Leave You In Splits

India vs Australia: Rohit Sharma and Ravichandran Ashwin poked fun at Cheteshwar Pujara as they enjoyed a light moment on social media after India's win in Melbourne. 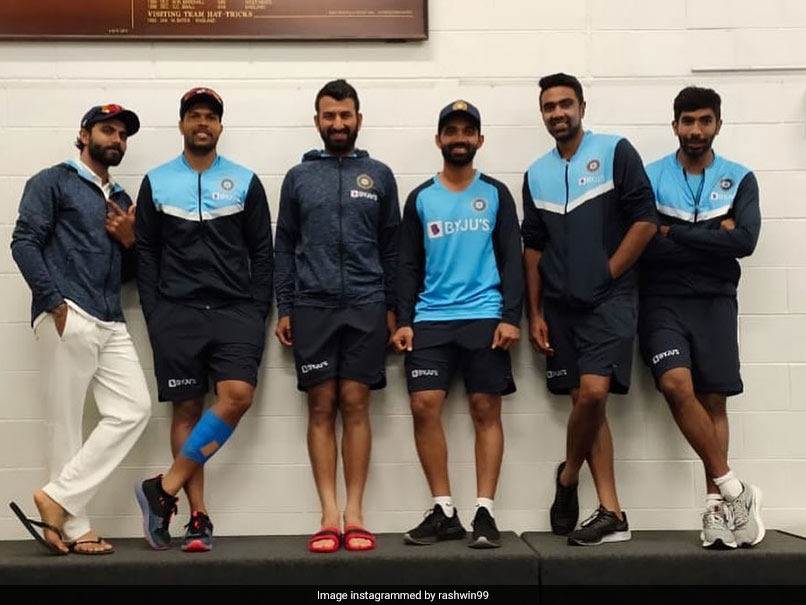 India vs Australia: R Ashwin and teammates posed with the MCG honours board in the background.© R Ashwin/Instagram

Ravichandran Ashwin and Rohit Sharma had some light-hearted banter at the expense of their fellow India teammate Cheteshwar Pujara after India won the second Test against Australia in Melbourne to level the four-match series 1-1. Ashwin posted a photo on social media where he is seen alongside Pujara, Ravindra Jadeja, Umesh Yadav, Ajinkya Rahane and Jasprit Bumrah with the Melbourne Cricket Ground (MCG) honours board in the background. Rohit, who is set to join the team in Melbourne after completing his quarantine in Sydney, posted a cheeky comment: "Pujara too stiff." Pujara is seen standing upright while the others pose more casually. To this, Ashwin responded: "national anthem was playing in his head!!" 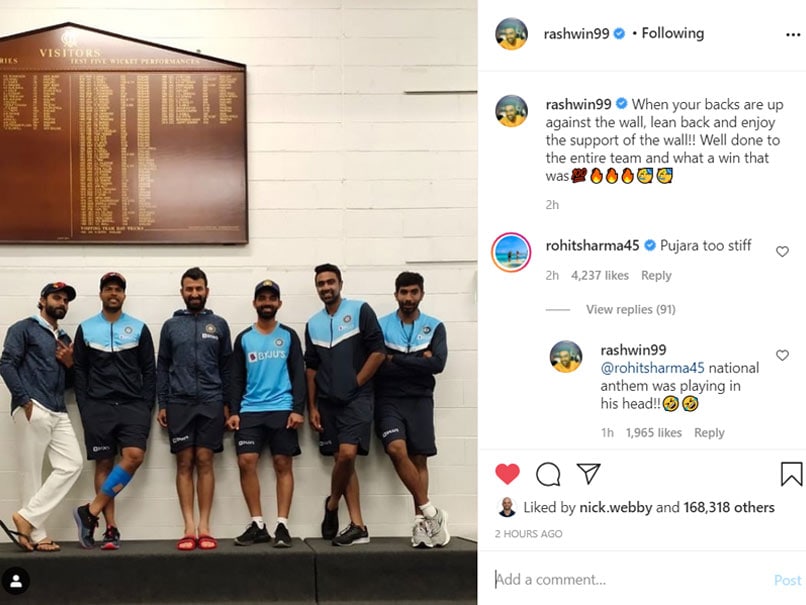 The banter followed what could be termed as one of the best Test wins for India in Australia, coming as it did after a humiliating loss in Adelaide.

Rahane scored a hundred, Jadeja got a fifty and Ashwin picked up a total of five wickets in the match as India beat Australia by eight wickets.

Ashwin maintained his grip over the opposition's top batsman and former captain Steve Smith, dismissing the batsman for the second time this series in the first innings of the Test.

Smith conceded after the game that he has let Ashwin "dictate terms" to him in their duels, something "no other spinner has done before."

As for Rohit, the right-handed batsman has reportedly completed his quarantine and is set to join the team in Melbourne.

According to a BCCI release shared before Rohit's departure to Australia, the limited-overs vice-captain will be assessed by the medical staff and team management after he completes his mandatory quarantine.

The third Test is scheduled to be played in Sydney and begins on January 7.

Cheteshwar Pujara Australia vs India 2020-21 Cricket
Get the latest updates on IND vs NZ 2021, check out the Schedule and Live Score . Like us on Facebook or follow us on Twitter for more sports updates. You can also download the NDTV Cricket app for Android or iOS.