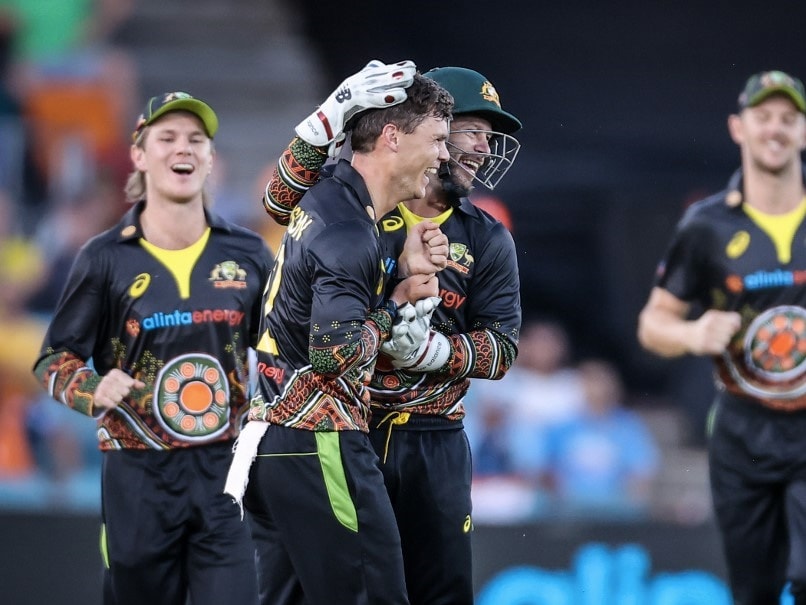 India vs Australia: Mitchell Swepson celebrates a dismissal during the 3rd T20I.© AFP

Australia grabbed a consolation win in the third T20I, defeating India by 12 runs, at the Sydney Cricket Ground on Tuesday. India captain Virat Kohli won the toss and elected to field. Opener Matthew Wade scored 80 runs from 53 balls, to help his side post a target of 187 runs. Australia finished at 186 for five after 20 overs, with Glenn Maxwell (54) also scoring a half-century. Washington Sundar was the top bowler for India, notching two wickets. Meanwhile, T Natarajan and Shardul Thakur also registered a dismissal each. India had a shaky start to their chase, losing KL Rahul early. Virat Kohli attempted to anchor India's chase, scoring 85 runs from 61 balls, but didn't receive much support from the other Indian batsmen. In the end, the visitors could only muster 174 for seven in 20 overs. Mitchell Swepson took three wickets for Australia, while Glenn Maxwell, Adam Zampa registered a dismissal each, respectively. The win also puts an end to India's winning streak in the shortest format of the game. Virat Kohli and his side have won the T20I series, 2-1. This series will be followed by a four-match Test series, which begins on December 17. (SCORECARD)

Steven Smith Australia vs India 2020-21 Australia vs India, 3rd T20I Cricket Live Score Live Cricket Score Live Blogs
Get the latest updates on ICC T20 Worldcup 2022 and CWG 2022 check out the Schedule, Live Score and Medals Tally. Like us on Facebook or follow us on Twitter for more sports updates. You can also download the NDTV Cricket app for Android or iOS.