India vs Australia Test highlights: In reply to the home side's target of 407 runs, the visitors put in a steady start but lost their openers on Day 4 of the ongoing third Test match, at the Sydney Cricket Ground. 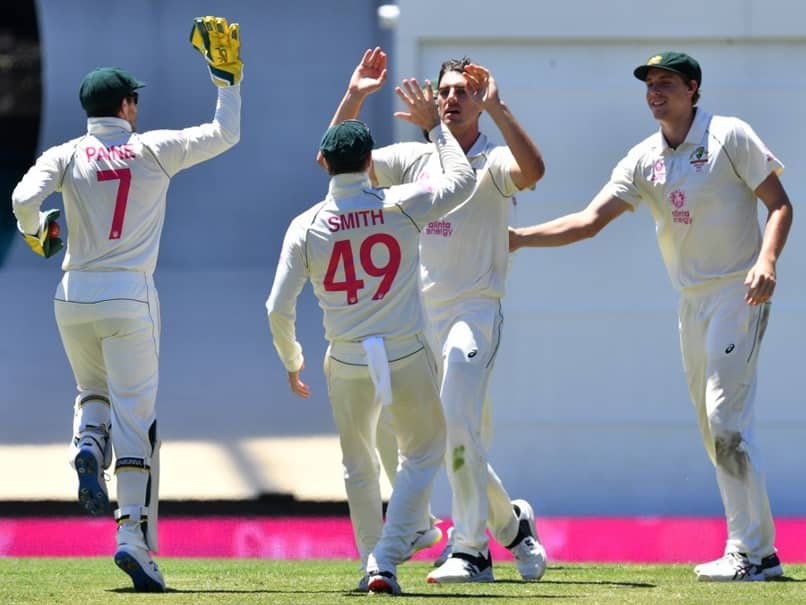 IND vs AUS: Pat Cummins celebrates a dismissal during Day 4 of the third Test.© AFP

Australia were in complete control against India on Day 4 of the ongoing third Test match, at the Sydney Cricket Ground (SCG). The visitors were 98 for two in 34 overs at Stumps on Day 4, after being set a target of 407 runs by Australia, who declared their second innings on 312/6. India will need to score 309 more runs on the final day to win the Sydney Test with eight wickets in hand. Openers Rohit Sharma and Shubman Gill gave the visitors a fine start. The former registered a half-century, slamming five fours and a six. Meanwhile, Cheteshwar Pujara and Ajinkya Rahane made sure there were no more setbacks after Rohit was dismissed soon after reaching his fifty. Pat Cummins continued with his fine form, registering the crucial wicket of Rohit while Josh Hazlewood got the better of Gill with a brilliant delivery. Earlier on Day 4, the Indian bowling department couldn't really find a way past Australia's batting order, leaking runs at regular intervals. Marnus Labuschagne (73), Steve Smith (81) and Cameron Green (84) scored half-centuries. Even, Tim Paine finally found some batting form, remaining unbeaten after scoring 39 runs. Navdeep Saini registered two wickets on Day 4, with Jasprit Bumrah and Ravichandran Ashwin notching a dismissal each. The visitors will be hoping to improve their display on Day 5 and do all they can to save the Test. (SCORECARD)

Rishabh Pant Australia vs India 2020-21 Cricket Australia vs India, 3rd Test Live Score Live Cricket Score Live Blogs
Get the latest updates on IPL 2021, IPL Points Table , IPL Schedule 2021 , live score . Like us on Facebook or follow us on Twitter for more sports updates. You can also download the NDTV Cricket app for Android or iOS.