Australia vs India: Rohit Sharma on Saturday said that fast bowler T Natarajan understands his bowling and it is something that the Indian bowling line-up really wants from a new bowler. 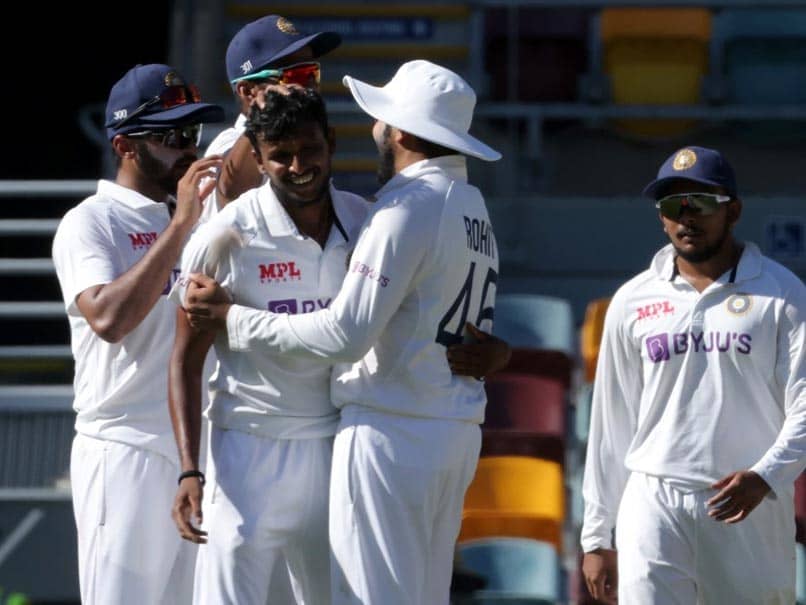 AUS vs IND: T Natarajan celebrates after picking up a in Australia's first innings in Brisbane.© AFP

"Natarajan is a bright prospect for us, he showed a lot of discipline when he played for India in the white-ball format. He was coming off a good IPL and he carried that confidence into the white-ball series against Australia. Then to have a Test match like that, first spell he bowled was very accurate, if I have to judge," said Rohit during the virtual press conference on Saturday.

"Somebody who is playing his first Test, we can really say that he understands his bowling really well, it is something that India wants. Natarajan was trying to do what was expected out of him and I think he looks like a bright prospect for sure," he added.

Talking further about Natarajan and Washington Sundar's performance, Rohit said: "They have played some first-class games coming into this Test. Playing against Australia in Australia was never going to be easy. But they showed a lot of character and they understood what the team expected them to do. We wanted to make sure that once Saini walked off, how we can contain and put pressure on Australian batsmen by not giving them easy runs, run-scoring can be easy here as it is a good pitch. Playing their first match, they showed a lot of character and discipline and yes, the team was expecting them to do something and both Sundar and Natarajan did that really well."

Rohit scored 44 runs in the first innings of the fourth Test, but in trying to hit a six, Rohit ended up gifting his wicket to off-spinner Nathan Lyon. But the opener backed his shot selection and said that it was important to build pressure.

Rain forced early stumps on Day 2 of the fourth Test between Australia and India at The Gabba on Saturday. India ended the second day's play at 62/2, trailing the hosts by 307 runs.

Brisbane Cricket Ground (Woolloongabba), Brisbane Australia vs India 2020-21 Cricket Australia vs India, 4th Test
Get the latest updates on India vs England Series, India vs England , live score and IPL 2021 Auction . Like us on Facebook or follow us on Twitter for more sports updates. You can also download the NDTV Cricket app for Android or iOS.