Australia vs India: Rohit Sharma took to Twitter to congratulate Team India on their T20I series win over Australia in Sydney on Sunday. 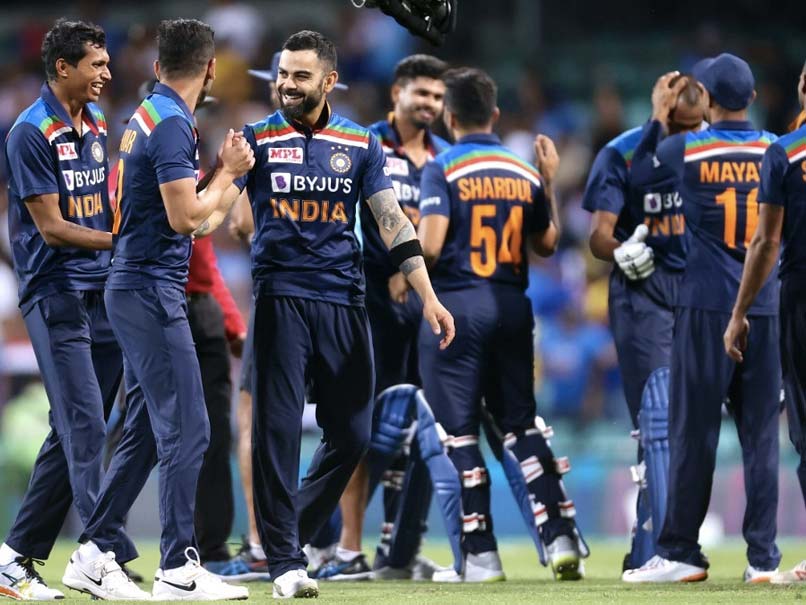 India beat Australia by six wickets in the second T20I on Sunday.© AFP

Rohit Sharma took to Twitter to hail Team India's "nice and composed" performance that saw them clinch the three-match Twenty20 International (T20I) series with a match to spare at the Sydney Cricket Ground. India defeated Australia by six wickets in the second T20I on Sunday. With the win, India took an unassailable 2-0 lead in the three-match series. "What a series win for Team India. Loved the way they played nice and composed. Big (thumbs up emoji) to each one of them. @BCCI," Rohit Sharma tweeted.

What a series win for Team India. Loved the way they played nice and composed. Big to each one of them. @BCCI

In the match, India captain Virat Kohliwon the toss and invited Australia to bat.

Matthew Wade, stand-in skipper in place of Aaron Finch, smashed a half-century that laid the foundation for a big first innings total.

Wade smashed 58 off 32 deliveries with the help of 10 boundaries and a maximum.

Steve Smith also chipped in with a handy contribution of 46 and late cameos from Moises Henriques and Marcus Stoinis helped them to post 194 for five from their allotted 20 overs.

In reply, India got off to a brisk start thanks to KL Rahul and Shikhar Dhawan.

KL Rahul fell for 30 in the sixth over but then Virat Kohli joined Dhawan in the middle and the duo added 39 runs for the second wicket.

Dhawan fell after scoring his 11th half-century in the shortest format of the game.

Kohli was looking good but in a bid to accelerate, he edged a wide delivery from Daniel Sams to wicketkeeper and lost his wicket for 40.

Hardik Pandya then smashed an unbeaten knock of 42 along with a cameo from Shreyas Iyer to give India a thrilling win.

Both teams will return to the same venue for the final T20I on Tuesday.

Virat Kohli Australia vs India 2020-21 Australia vs India, 2nd T20I Cricket
Get the latest updates on SA vs IND 2021-22, check out the Schedule and Live Score . Like us on Facebook or follow us on Twitter for more sports updates. You can also download the NDTV Cricket app for Android or iOS.