Ravindra Jadeja joined Hardik Pandya with India at 152/5 in the 3rd ODI vs Australia and the two put on a match-winning 150-run partnership. 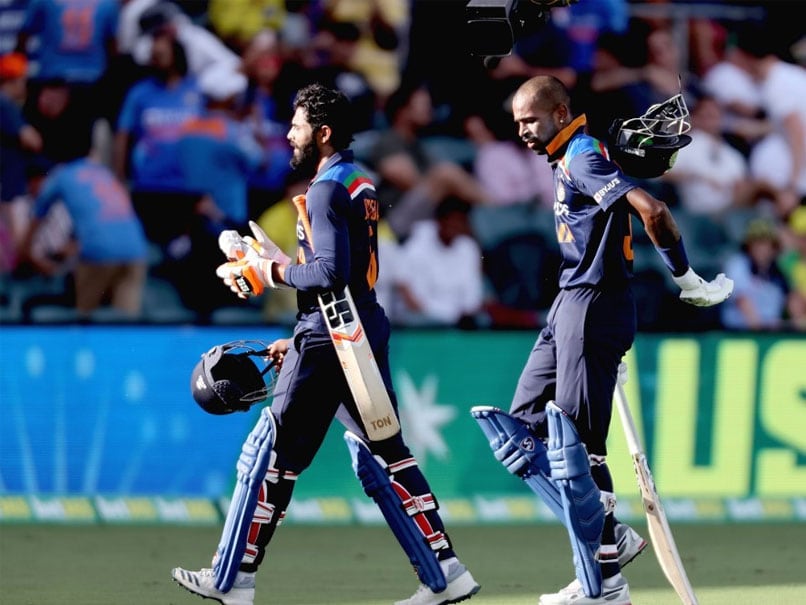 After registering a 13-run win over Australia in the third and final One Day International, India all-rounder Ravindra Jadeja on Wednesday said that the partnership between him and Hardik Pandya was very crucial looking at the context of the match. While India opened their account in the ODI Super League with this win, Australia took the series 2-1. Now, both the sides will face off in the three-match T20I series, beginning Friday. Jadeja played an unbeaten knock of 66 runs and he stitched a partnership of 150 runs with Pandya to take India's score to 302/5.

"The plan was simple, Hardik and I kept on talking about how to build the partnership. We both knew that were no frontline batsmen left after us. We were aware of not losing any wickets and both of us were looking to play till the end. It was very crucial that we took the team to a respectable score," Jadeja told Yuzvendra Chahal in an episode of 'Chahal TV'.

Jadeja also managed to take the crucial wicket of Aaron Finch, and he ended up with the figures of 1-62 in his quota of ten overs.

Talking about his bowling, Jadeja said: "I was thinking about bowling stump-to-stump. There was little turn on offer so I tried to utilise that."

Luck was on India's side to begin with as Kohli won the toss for the first time in the series and decided to bat. While the top-order failed to fire in unison, the middle-order rose to the challenge and both Pandya and Jadeja played match-winning knocks of 92 and 66 respectively to guide India to 302/5. Kohli played a knock of 63 runs.

The addition of Shardul Thakur, T Natarajan, and Kuldeep Yadav also rejuvenated the bowling in the third ODI as the side was finally able to take wickets at regular intervals.

For the first time in the last six ODIs, the Men in Blue also managed to take a wicket in the powerplay overs. Aaron Finch played a knock of 75 runs, while Glenn Maxwell and Ashton Agar tried their best to take Australia over the line. But in the end, Kohli and the boys managed to hang on to register a 13-run win.

Yuzvendra Chahal Cricket
Get the latest updates on ICC T20 Worldcup 2022, check out the Schedule and Live Score. Like us on Facebook or follow us on Twitter for more sports updates. You can also download the NDTV Cricket app for Android or iOS.