Australia vs India: Aaron Finch and KL Rahul showcased their camaraderie during the second ODI in Sydney by sharing a light moment on the field. 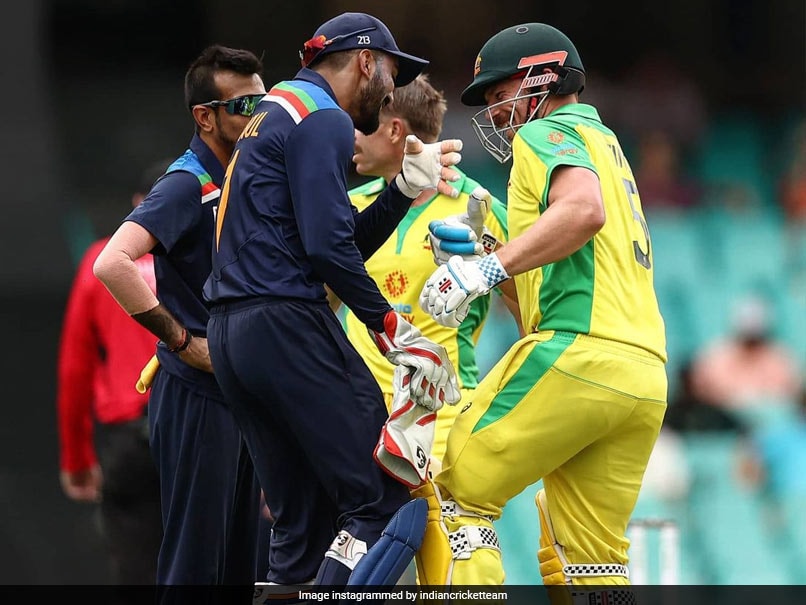 KL Rahul and Aaron Finch shared a light moment during the 2nd ODI in Sydney on Sunday.© Instagram

Aaron Finch and KL Rahulshared a light moment on the field during the ongoing second One-Day International(ODI) between Australia and India in Sydney on Sunday. After opting to bat, Finch and David Warner again got the hosts off to a good start, stitching 142-run stand for the first wicket. In the 12th over of Australia's innings, Navdeep Saini bowled a full toss to Finch which the Australian skipper missed and it hit him straight on the stomach. Finch was seen struggling with pain after taking the blow to his body. India's wicketkeeper KL Rahul tried to tickle Finch where he was hit and the Australia skipper boxed him away, with smiles all around.

KL Rahul just checking on Aaron Finch after getting hit by a full toss #AUSvIND pic.twitter.com/lb9Kzthisl

Finch was on 18 when the incident took place and he went on to score his 28th ODI half-century after that. He made 60 off 69 balls with the help of six boundaries and a maximum.

Mohammed Shami provided India with the first breakthrough as Finch got a leading edge which was taken at mid-off by India captain Virat Kohli.

Finch's opening partner David Warner too scored a half-century, his second of the ODI series.

Warner smashed 83 runs off 77 balls in an innings packed with three maximums and seven boundaries.

Warner's innings came to an end thanks to some brilliance in the field by Shreyas Iyer, who scored a direct hit from outside the 30-yard circle.

For India, this is a do-or-die encounter after they were hammered in the series opener on Friday.

Aaron Finch Australia vs India 2020-21 Australia vs India, 2nd ODI Cricket
Get the latest updates on Fifa Worldcup 2022 and check out  Fifa World Cup Schedule, Stats and Live Cricket Score. Like us on Facebook or follow us on Twitter for more sports updates. You can also download the NDTV Cricket app for Android or iOS.