Virat Kohli had earlier expressed his preference for Ambati Rayudu to other players for the number four position. 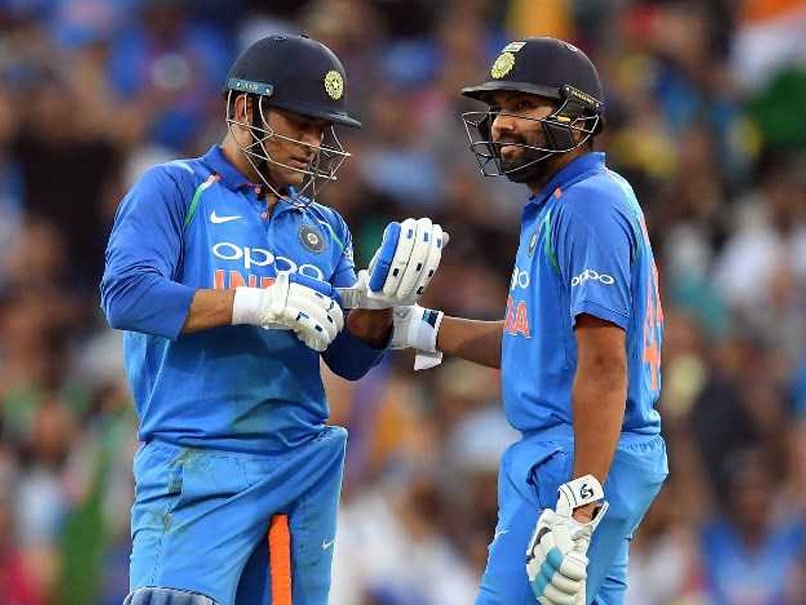 MS Dhoni scored a half-century while batting at number five in the first One-day International but India lost the series opener by 34 runs at the Sydney Cricket Ground (SCG) on Sunday. India vice-captain Rohit Sharma, who made 133 runs off 129 balls, believes that India's World Cup-winning captain is "ideal" for the number four slot, an opinion much different from his skipper Virat Kohli's view point. However, Rohit added that Ambati Rayudu is no less impressive at number four and the captain will have the final say on the batting order.

"Personally, I always feel that Dhoni batting at number four will be ideal for the team but we have got Ambati Rayudu who has done really well now at number four. It totally depends on what the captain and coach think about it. Personally asking, I would be happy if Dhoni bats at four," Rohit, who scored 133 off 129 deliveries, said at the post-match conference.

Kohli had earlier expressed his preference for Rayudu to other players for the contentious position.

Chasing 289 for a win, India were at one stage reduced to 4 for 3 before Rohit, who scored his 22nd ODI hundred, and Dhoni put on a 141-run partnership for the fourth wicket. But India, in the end, fell short.

"If you look at his (Dhoni's) overall batting, his strike rate is around 90. Today was a different scenario, when he came out to bat we had already lost three wickets and Australia were bowling pretty well. You just cannot go out and get 100-run partnership easily. So we took a little bit of time and even I did not score as quickly as I normally do," Rohit said.

"I took my time too because we wanted to get that partnership and losing another wicket at that point, the game would have been dead there and then. So, we had to play dot balls and build a partnership," he explained.

Rohit also said that the former captain was ready to bat anywhere for the team.

India's top-order was exposed after they lost Kohli and Shikhar Dhawan early on, as well as Ambati Rayudu for a two-ball duck. Rohit said it put pressure on other batsmen to build a partnership but denied suggestions that India's middle-order is light weight.

MS Dhoni Australia vs India 2018/19 Cricket
Get the latest updates on ICC T20 Worldcup 2022, check out the Schedule and Live Score. Like us on Facebook or follow us on Twitter for more sports updates. You can also download the NDTV Cricket app for Android or iOS.