"We Were Lucky To Get MS Dhoni Out": Australia Fast Bowler Jhye Richardson

MS Dhoni was given out leg before wicket during debutant Jason Behrendorff's 33rd over. India eventually lost the match by 34 runs. 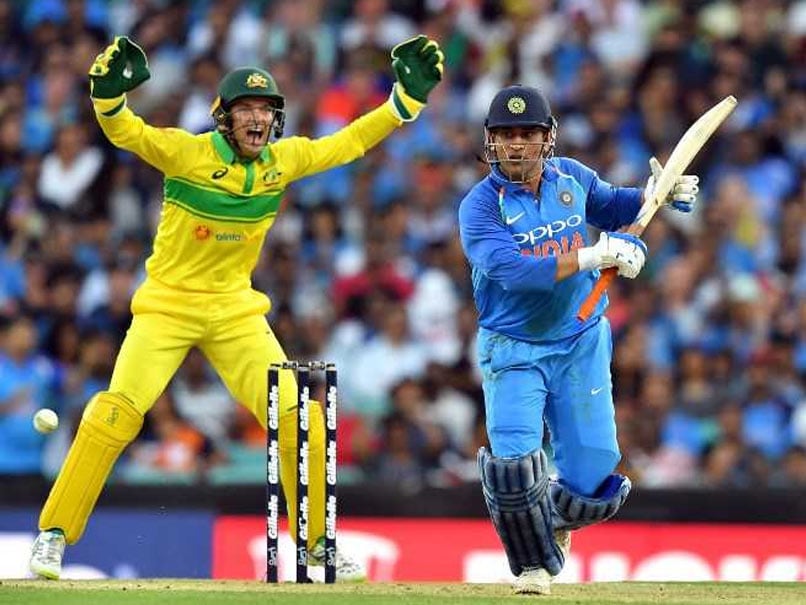 MS Dhoni scored 51 in the first ODI vs Australia in Sydney.© AFP

Australia fast bowler Jhye Richardson said Australia were lucky to get MS Dhoni out with a dubious call in the first One-day International against India in Sydney on Saturday. Dhoni was given out leg before wicket when the Australians appealed during debutant Jason Behrendorff's 33rd over, but TV replays showed the ball had pitched outside the leg-stump. The veteran could not opt for a review as it was unsuccessfully used up by Ambati Rayudu. Dhoni was involved in a 141-run partnership with Rohit Sharma at the Sydney Cricket Ground.

"There was a period there when they had a partnership through the middle and it almost could have taken the game away from us. But we were lucky to get Dhoni out lbw and we kept getting wickets from there on," Richardson said.

Richardson took his best figures in ODI cricket, 4-26 in 10 overs, as Australia won the first match by 34 runs to take a 1-0 lead in the three-match series. He praised centurion Rohit Sharma's effort. "Rohit batted really well. Credit to him and he summed up the conditions just as well as we did. He batted very patiently and knew the balls he could put away. He picked the gaps really well tonight.
"Rohit was very dangerous and we understood that. So our plan sort of changed to getting him off strike and just bowling at the batsman down the other end."

The young pacer said that the hosts were confident of defending a "competitive" 288 as they thought the SCG wicket was on the slower side.

"It was a really good wicket and we understood that it wasn't the quickest wicket in the world. So we knew when the ball goes a little softer later in the innings, when we turn the slower balls, we could use change of pace and we thought it would be quite effective," Richardson said.

The 22-year-old's bowling played a crucial role in Australia's comfortable victory. "We saw it at the end and the change of pace worked really well. We thought it would be a competitive score and 280 is a competitive score. There are a few long boundaries at the SCG and I think we actually bowled well according to that tonight," Richardson said.

Australia had a slow start and managed to score 288/5 after opting to bat, but thanks to Richardson, India had a poor start and were reduced to 4/3 at one stage before finishing at 254/9 as Rohit Sharma's 22nd hundred went in vain.

This was the first time since 2017 that Australia won the opening game of an ODI series. "I was actually disappointed when the ball came out. I probably bowled a bit too straight," said the pacer about Virat Kohli's dismissal.    "I had a fielder there who hung on to it, so it is a wicket I will remember for a very long time."

"I am ecstatic and really excited for the team. It's good to put a personal performance on the board but I am really excited in the way Australian cricket is heading.    "The way we prepared for this game and the research we did on Indian players. Everything leading up to this game, I felt was absolutely perfect and the result was ideal tonight," he added.

MS Dhoni Australia vs India 2018/19 Cricket Australia vs India, 1st ODI
Get the latest updates on ICC T20 Worldcup 2022, check out the Schedule and Live Score. Like us on Facebook or follow us on Twitter for more sports updates. You can also download the NDTV Cricket app for Android or iOS.