Tim Paine, who scored 22 runs, was the highest run-getter for Australia in the first inning. 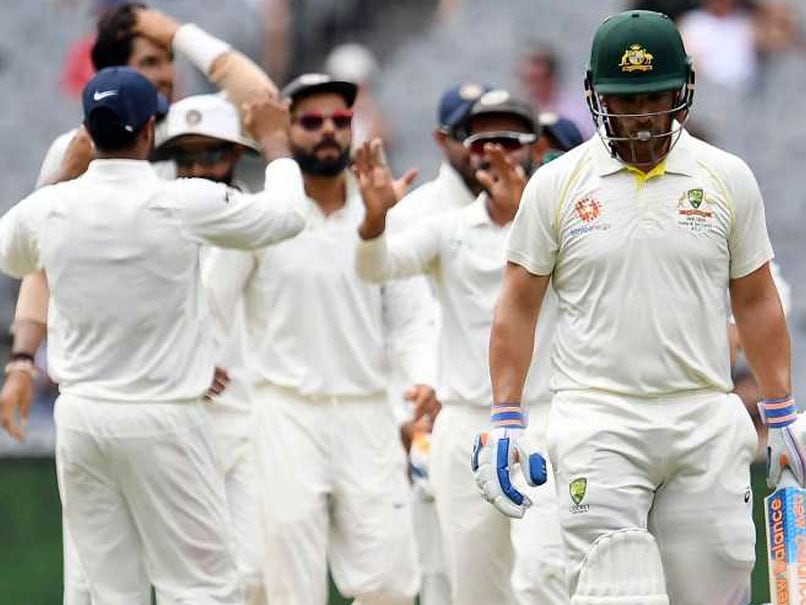 Aaron Finch was dismissed for eight in the first innings.© AFP

The Australian batting order collapsed in their first innings as India wrapped up the hosts for a paltry 151 on Day 3 of the Melbourne Test. Jasprit Bumrah wreaked havoc claiming six wickets as Australia batting order succumbed against the Indian pacer. Taking a dig at the performance of the Australian batsmen, former England captain Michael Vaughan said that the hosts failed to deliver under pressure. Vaughan further stated that the Australian batsmen were “technically poor” and only rain can help them save the match.

As good a day of fast bowling as you can see ... @Jaspritbumrah93 is outstanding !! He should have got a bag full in Perth but gets his rewards in Melbourne ... The Aussies batting once again fails under pressure ... Technically so poor ... #AUSvIND

The only thing that can save the Aussies in Melbourne is rain ... they have no chance chasing down the Indian target if the declared now ... !! What a great series this has been ...

Resuming on the overnight score of 8 without any loss, Australia, on the third day of the Melbourne Test failed to impress with the bat. The home team lost wickets at regular intervals as the Indian pacers, led by Jasprit Bumrah claimed eight wickets.

Apart from Bumrah, Ishant Sharma and Mohammed Shami provided able support from the other end, picking up a wicket a piece while left-arm spinner Ravindra Jadeja claimed wickets of Usman Khawaja (21) and Mitchell Marsh (9).

Pacer Pat Cummins, after the day's play, also acknowledged the fact that the Australian batsmen did not apply themselves on the tricky MCG pitch and need to learn from the likes of Cheteshwar Pujara and Virat Kohli.

"What we saw from India's first innings, we saw temperament of Pujara and Virat and how they pace their innings. They absorb pressure because on this kind of wicket, it is hard to score runs.

"You have to face a lot of balls to get big scores and it is probably one of those wickets where you do the hard work early. Keep absorbing pressure and score later, but evidently it did not work for us today," Cummins said.

India were reeling at 54 for five at stumps on Day 3 but had a commanding 346-run lead in the second inning. Mayank Agarwal (28) and Rishabh Pant (6) were in the middle for India when umpires called it a day.

Melbourne Cricket Ground Australia vs India 2018/19 Cricket Australia vs India, 3rd Test
Get the latest updates on ICC Women's Cricket World Cup 2022 and IPL 2022, check out the Schedule , Live Score and IPL Points Table. Like us on Facebook or follow us on Twitter for more sports updates. You can also download the NDTV Cricket app for Android or iOS.