India, chasing 331 for a win, got off to a flying start courtesy half-centuries from openers Shikhar Dhawan and Rohit Sharma but wickets of the the southpaw and Virat Kohli threatened to derail India's chase. Rohit fell on 99 but Manish Pandey smashed an unbeaten ton to give India a memorable six wicket win that helps them avoid a whitewash. Catch all the highlights here.

David Warner's 122 off 113 balls and Mitchell Marsh's unbeaten century bailed out the hosts from a precarious position to take them to 330-7. India openers Rohit Sharma and Shikhar Dhawan got the visitors off to a flying start but Australia fought back after removing Dhawan and getting Virat Kohli out cheaply. It was heartbreak for Rohit as he was dismissed on 99 but only after a solid partnership with Manish Pandey. Pandey then struck a brilliant unbeaten 104 off 81 balls to guide India home and help them retain the number two ranking. Catch all the highlights here (SCORECARD| NEWS | VIDEOS):

India win a thriller! What a knock from Pandey. Australia claim the series 4-1: https://t.co/6eauqKS6ec #AUSvIND pic.twitter.com/C6AaUFykBs

16:27 hrs IST: Four!! Lucky boundary for Pandey. Gets an under edge that goes to the third man boundary!

16:17 hrs IST: Dhoni is riding his luck here. This is comical batting from the Indian skipper. Gets a big edge and it goes high in the Sydney sky but drops just shot of the third man.

16:14 hrs IST: Big LBW appeal against Dhoni!! That looked out. Dhoni is lucky to still be there. First a dropped, then umpire mistake!! Dhoni needs to take advantage of this. India are 285-3 after 45 overs.

16:07 hrs IST: Partnership is 44 off 52 balls. Pandey is playing a match-winning innings. Does he have the temperament to guide India home? India are 279-3 after 44 overs. 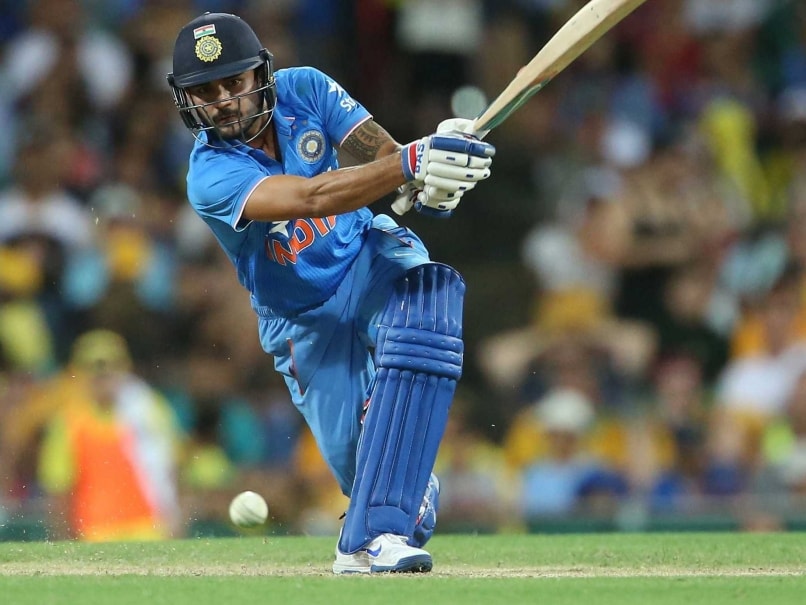 Manish Pandey smashed his second ODI fifty as he kept India in the hunt in the fifth ODI in Sydney.

16:01 hrs IST: Four!! Manish Pandey comes down the track and strokes it beautifully through covers. He is doing Dhoni a big favour here. Dhoni seems to be pulling India's chase down. He is on 8 runs off 22 balls.

15:56 hrs IST: This is slow!! Dhoni can't get the ball away. He is making the asking rate jump up . Three dot balls in Lyon's over!! What is he waiting for??

15:54 hrs IST: Dhoni better not get out now!! He has played 17 deliveries for 6 runs. And is putting enormous pressure on Manish to do the bulk of the scoring.

15:49 hrs IST: Four!! Manish Pandey smashes that to the square boundary to take India closer. He is playing a gem of an innings here. India are 252-3 after 39 overs.

15:39 hrs IST: Half-century for Manish Pandey!! His 2nd ODI fifty is off 38 balls and in the circumstances worth a weight of gold.

15:30 hrs IST: WICKET!! Heartbreak for Rohit. He has been dismissed for 99. Catastrophe for India!! Rohit was bemused by the umpire's decision. India 231-3 after 35 overs.

It was a MASSIVE call from Blocker Wilson to give that out. Snicko suggests there was something there! #AUSvIND pic.twitter.com/Z5bf6pzoqT

15:26 hrs IST: Dropped!! Rohit is put down by Shaun Marsh on 92. That was a sitter!! His brother Mitchell was bowling. What a gaffe for Australia!!

15:21 hrs IST: Six!!Manish Pandey smashes Nathan Lyon for a maximum over the cover boundary! India are 220-2 after 33 overs.

15:20 hrs IST: That was close for Manish Pandey!! Run out chance referred to third umpire. But the dive saves him!!

15:11 hrs IST: Four more!! This time its Rohit as frees his arms and deposits the ball over mid-on for another boundary. India are 204-2 after 31 overs.

15:10 hrs IST: Four!!Short ball Steve Smith is put away to the square leg boundary by Pandey. Great batting as Manish Pandey moves to 33 off 28 balls.

14:55 hrs IST: Four!! Classy shot from Manish Pandey! He comes down the track and creams a beautiful cover drive to take India to 173-2 after 27 overs.

14:49 hrs IST: This has to be the funniest reaction to a dropped catch!!

14:46 hrs IST: Six!! The ball is dismissed from its presence by Rohit. That was a cracking shot. Much-needed for India. 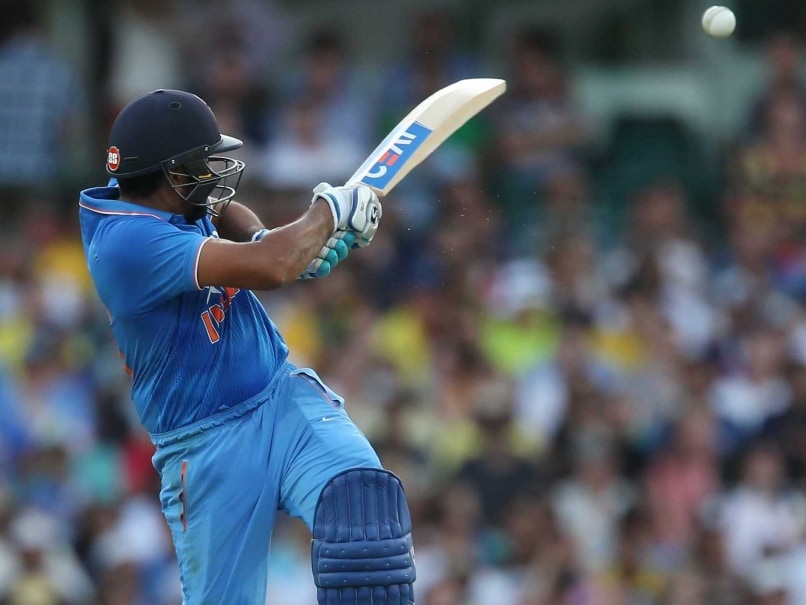 Rohit Sharma slammed his 28th fifty as he kept India afloat in a big chase in Sydney.

14:38 hrs IST: Half-century for Rohit!! His 28th ODI fifty comes off 60 balls. He'll need to be there in the end if India are to have any chance of winning.

14:34 hrs IST:Manish Pandey is in!! Huge opportunity for the youngster to make his mark.

14:30 hrs IST: WICKET!! Massive wicket for Australia. Kohli has been dismissed for 8. Kohli goes for an expansive drive but edges it straight to the keeper. India are 134-2 after 20.2 overs.

14:21 hrs IST: Dead ball! That was going for a six but the spider cam came in the way. Umpires call it a dead ball. Kohli robbed off six runs and boos ring out at the SCG. Not fair at all!!

14:12 hrs IST: Four!! Dhawan has gone ballistic here! He came down the track and lifted the bouncer over the short third man to notch his 6th four of the innings. India are 119-0 after 18 overs.

14:11 hrs IST: Dhawan goes for the sweep and gets a top edge. Luckily for him it lands safely with three fielders converging. India are 112-0 after 17 overs.

A century stand for India and the Aussies have some work to do here... LIVE: https://t.co/6eauqKS6ec #AUSvIND pic.twitter.com/oh1S27onRb

14:07 hrs IST: Someone is obviously bored by the Indian onslaught!!

14:03 hrs IST: India are moving along nicely. Need to keep that run-rate up and not throw it away like last time. India 97-0 after 15 overs. 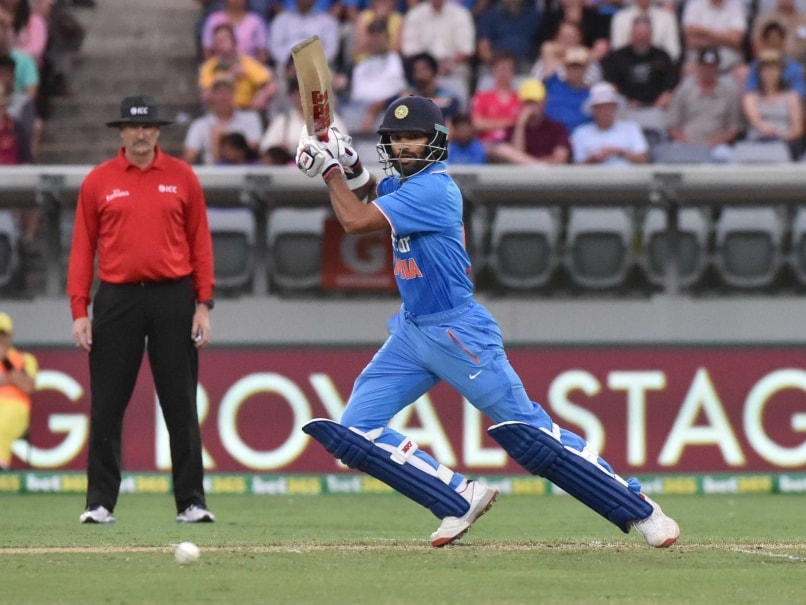 Shikhar Dhawan reached his 17th ODI half-century and his fourth against Australia.

13:51 hrs IST: Four!! Beautiful shot from Rohit. Creams that through the covers! Rohit has reached 28 off 31 balls.

13:40 hrs IST: Four!! Dhawan is having a field day!! Smashes that straight back and gets another boundary. India off to a flyer!! India are 65-0 after 9 overs.

A bit of teamwork in the crowd to complete the catch as well! https://t.co/6eauqKS6ec #AUSvIND pic.twitter.com/OEaB1Gq4yv

13:35 hrs IST: Four more!! That was an action replay of the previous shot. Delightful strokeplay from Rohit!

13:34 hrs IST: Four!! Rohit joins the party with a beautiful flick through mid-wicket.

13:32 hrs IST: Four!! Dhawan is striking the ball like a dream. Comes down the track and lifts the ball over cover. India are 39-0 after 7 overs.

13:30 hrs IST: Six!! What a shot from Dhawan! He picks the full delivery from Hastings and flicks it for the maximum.

13:27 hrs IST: Four!! Dhawan comes down the track and smack the short and wide delivery to the point boundary. Great shot!!

13:23 hrs IST: Four!! First boundary for Rohit and India. That was silky smooth from the right-hander!!

13:14 hrs IST:GreatÂover from Scott Boland!! Just one run off the second over. India are 3-0 after 2 overs.

13:05 hrs IST: India openers Rohit Sharma and Shikhar Dhawan are out in the field!! All set to start!!

CENTURY! There it is, a maiden ODI century for @mitchmarsh235! You beauty! It comes off 81 balls #AUSvIND #GoGold pic.twitter.com/q4pdfs2vZK

12:32 hrs IST:Mitchell Marsh just can't get it away. What an over from Bumrah. Just 3 runs and a wicket in that over. What a debut for the youngster!! Gave away just 40 runs in his 10 overs and two wickets!! Impressive stuff!!

12:29 hrs IST:ÂMitchell Marsh moves to 99 with a single. This will be his maiden ton. But another brilliant delivery from Bumrah.

12:27 hrs IST: WICKET!! Bumrah cleans up James Faulkner!! Great bowling by the debutant. Gets his second wicket. Faulkner goes for 1 off 3 balls.

12:24 hrs IST: WICKET!! Finally, Umesh has something to cheer about! Wade gets a big edge and is pouched easily by MS Dhoni behind the stumps, Wade b Umesh c Dhoni 36 (27 balls)

12:18 hrs IST: Four!! No respite from Mitchell Marsh as Ishant bears the brunt now. The Australian all-rounder has moved to 93 - his highest ODI score. If anyone needs to break batting records, face Indian bowling!! Australia are 313-5 after 47 overs.

12:16 hrs IST: This is fifth time in last six ODIs that India have conceded 300 plus runs. India need a bowling overhaul. Just a sub-standard attack!!

12:12 hrs IST: Four!! 300 up for Australia!!Mitchell Marsh cracks that to the cover boundary with disdain. Guess what, it was a slower ball from Rishi Dhawan!

12:08 hrs IST: Six!! Fifty-run partnership between Mitchell Marsh and Mathew Wade! Marsh pulls that over square leg boundary for a maximum. Australia are 292-5 after 45 overs.

12:03 hrs IST: Four!! Rishi Dhawan is bowling one slower ball after another. And Wade saw that coming and smacked that over mid-wicket boundary.

11:48 hrs IST: Four!!Short ball and pulled away to the boundary by Mitchell Marsh. Time for Umesh Yadav to go!! Surely, there are better pacers in India than him. Just bowling 140 plus can't be the criteria to be selected in an international squad. Another 14 runs from his over. Australia are 249-5 after 40 overs.

11:46 hrs IST: Four!! Mitchell Marsh smacks Umesh Yadav straight down the ground. Things are going from bad to worse for the Indian pacer.

11:42 hrs IST: WICKET!! Just as we say that Ishant gets his own back!! Warner is gone for 122 off 113 balls. Crucial breakthrough for India!! Could be the difference between Australia reaching 350 runs. Australia are 235-5 after 39 overs.

Comments
Topics mentioned in this article
India Cricket Team Australia Cricket Team MS Dhoni Sydney Cricket Ground (SCG), Sydney Australia vs India 2015-16 Live Cricket Score Live Blogs Cricket
Get the latest updates on IPL 2021, check out the IPL 2021 Schedule and Indian Premier League Live Score . Like us on Facebook or follow us on Twitter for more sports updates. You can also download the NDTV Cricket app for Android or iOS.