David Warner admits that the job of the bowlers in ODI cricket is very hard and praised Glenn Maxwell's mature 96 in Melbourne. 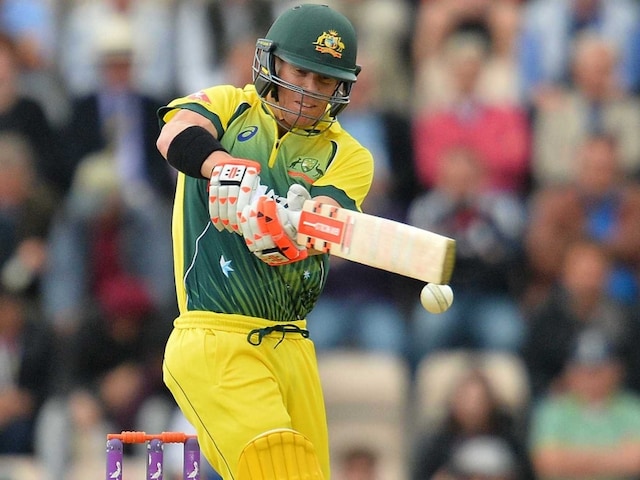 David Warner has said Glenn Maxwell is maturing with the passage of time and believes he can perform well in Tests.© AFP

India's batsmen did exceedingly well in all three ODIs, putting up 300-plus targets but the bowlers could not defend any of them giving Australia an unassailable lead of 3-0 in the five-match series. (Ravi Shastri Says Bowlers Have to Step Up To Avoid Whitewash)

"In any kind of cricket, all you want is early wickets. I think One-day cricket now is being played along the lines of Test cricket in the first 10 overs, then they will look to accelerate in the middle part and obviously look to finish it off. It's quite challenging for the opening bowlers," Warner said ahead of the fourth ODI in Canberra on Wednesday. (Shane Watson Surprised by Twenty20 Call-Up)

"They've got to bowl good lines and lengths. Given, the flat wickets around the world in ODI cricket, you just got to dry the runs up and create the pressure. It's very hard when the ball's not swinging in these conditions. It's getting tougher for the bowling unit, but as a batting department, it's fantastic for us if we can keep playing the way we play and keep posting big totals," the southpaw said. (Glenn Maxwell Says Australia Aiming for 5-0 Whitewash)

"At the end of the day, as I said, we've got to keep chasing or defending what we can. I don't have the answer, as we're playing great cricket. As everyone's talking that 300 is now the new 250, we've seen totals of 350 in India being chased down as well."

Warner had missed the last two matches owing to paternity leave, and while he was away for the birth of his second daughter, George Bailey and Glenn Maxwell carried the team past the victory lines in Brisbane and Melbourne, respectively.

Warner said that the Indian top-order is in great shape, but chasing 300 hasn't been too tough so far in this series.

"The Indian top-order is playing great cricket, they're playing fantastic at the moment. Rohit Sharma is in probably the form of his career. He's a very good white ball player. Virat's obviously is a very good player. He sort of is the rock in the middle.

"Then obviously, you've got Ajinkya Rahane who comes in and he's capable of playing those big shots. Credit to him, he's worked hard in the last 12 months. I've seen him evolve through the IPL and trying to rotate the strike and clear the ropes. That's fantastic from an Indian point of view. But at the end of the day, so far, 300 hasn't been enough so, we have to keep being on top of our game to chase down the good totals that India are posting," said.

Talking about Maxwell's 96 at the MCG on Sunday, Warner said, "I think he's been picking a lot of people's brains and that's the good thing about him. He's maturing with age and I think we're yet to see his real talent. I think we saw a glimpse of it the other night. He played a mature innings and in the BBL he got 50 off 40 balls as well without taking a risk. That's what we've got to reiterate to him is that he's capable of doing that."

"He doesn't need to come out and play that big shot from ball one. But like all of us we like to hit a boundary in the first 10 balls to get us off (and running). I'm really excited to keep playing alongside him and following his career."

"I think it's great that everyone was able to see that and know what he's capable of. Because there are a few critics out there, we've all had them before, labelling him a Twenty20 specialist. I believe he can be a long form specialist too."

Nathan Lyon has come into the Australian squad for the final two ODIs as the hosts will look to evaluate him ahead of the three-match T20I series and then the T20 World Cup in India later in March-April. It leaves the question who will be left out of the Australian eleven, with all their pace bowlers performing very well.

This will be the first time India will play Australia at the Manuka Oval. The visitors' only outing here has been against Sri Lanka in the 2007-08 CB Series. Even for the hosts, this is not a ground that hosts too many international matches.

Comments
Topics mentioned in this article
Australia Cricket Team David Warner Glenn Maxwell Manuka Oval, Canberra Australia vs India 2015-16 Cricket
Get the latest updates on IPL 2020, check out the IPL Schedule for 2020 and Indian Premier League (IPL) Cricket live score . Like us on Facebook or follow us on Twitter for more sports updates. You can also download the NDTV Cricket app for Android or iOS.