On a day when Virat Kohli had to battle Australian verbal assaults, love made a brief but noticeable appearance when the batsman completed his century. 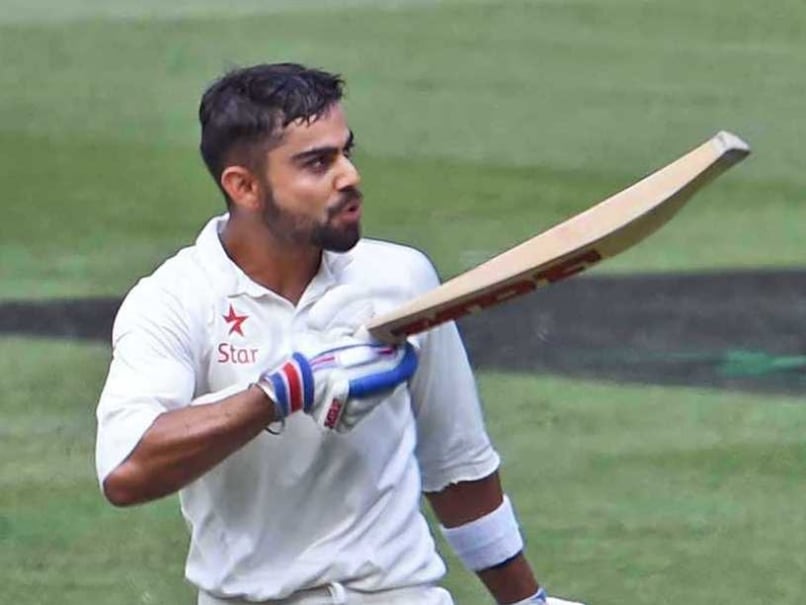 Virat Kohli celebrates after scoring a century against Australia in the 3rd Test.© AFP

It was a grueling battle against torrid bowling and fierce verbal volleys on the third day of the Melbourne Test. For Virat Kohli however, the stage was set for an epic innings in front of fans led by a cheering Anushka Sharma. (Latest Day 4 report)

Kohli waged a brave war against Australian pacers led by Mitchell Johnson. It was a hazardous task, especially as India had lost Shikhar Dhawan and Cheteshwar Pujara with the score on 108. At No. 4, Kohli took all of two minutes to race his way to the middle. While he was greeted with a three-slip cordon, the India vice-captain soon showed just why he is rated as one of the best batsmen in the world. The Delhi batsman first brought up his fifty (off 86 balls) and then reached the three-figure mark off 166 balls. While he was all-pumped in his journey towards a ton - Johnson had repeatedly exchanged words with him, love seemed to conquer all eventually as he blew a kiss towards girlfriend Anushka Sharma who was in the stands on Sunday.

Anushka - looking ready for the Aussie summer in a white dress - had been following the on-field action wand the banter intensely. The moment Kohli completed his ton though, the Bollywood actress' face lit up and she joined the Melbourne Cricket Ground in appreciating the gritty knock. (Read: How Virat Kohli survived Mitchell Johnson's verbal onslaught)

While Anushka flew into Melbourne for the third Test, she was not the reason for Kohli's inspiration out in the middle. The batsman, in fact, said it was the verbal aggression from the Australians that brought out the best in him. "They were calling me a spoilt brat, and I said, 'Maybe that's the way I am. You guys hate me, and I like that.' I don't mind having a chat on the field, and it worked in my favour I guess," Kohlio said at the post-match conference. "I like playing against Australia because it is very hard for them to stay calm, and I don't mind an argument on the field, and it really excites me and brings the best out of me." (Australia's dropped catches surprises Kohli)

Kohli's innings eventually ended on 169 with India trailing by 68 in the first innings. The batsman though doesn't seem to be done just yet and has promised to continue his form when he comes out in the second innings.

Comments
Topics mentioned in this article
India Cricket Team Australia Cricket Team Aus vs Ind, 2014-15 Virat Kohli Mitchell Johnson Melbourne Cricket Ground Cricket
Get the latest updates on India vs Australia Series, check out the India vs Australia Schedule for 2020-21 and Ind vs Aus live score . Like us on Facebook or follow us on Twitter for more sports updates. You can also download the NDTV Cricket app for Android or iOS.