The highly-anticipated Test series has been billed as a tussle between Indian batsmen and Mitchell Johnson. The visitors, however, need to brace themselves for far more than just that. 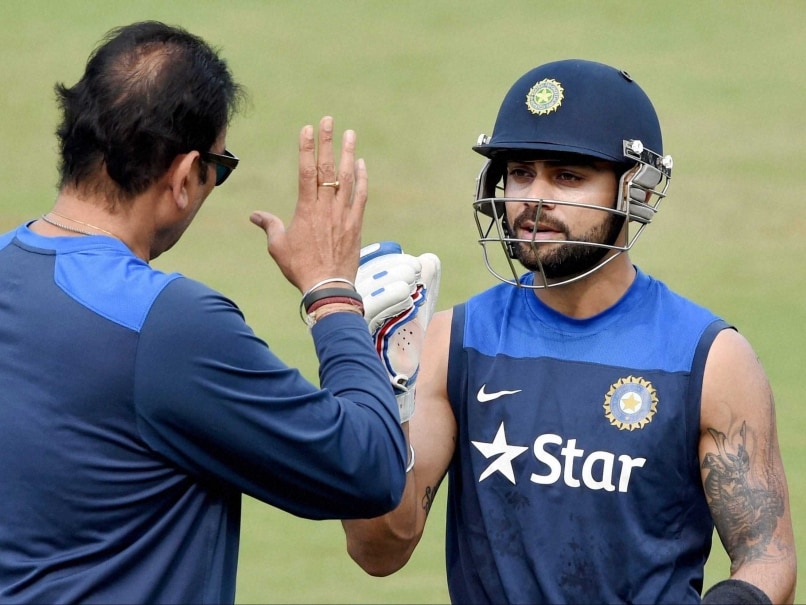 Virat Kohli with Ravi Shastri in training ahead of 1st ODI vs Sri Lanka in Cuttack.© PTI

In the backdrop of Phillip Hughes' shocking demise, there is growing concern over the otherwise highly-competitive contest between Team India and Australia. Flaring tempers, rising temperatures and finest quality of cricket have been salient features of recent encounters between the two sides. There are doubts, however, over the nature of competition, with the Australian team reeling in the loss of one of their own. There are also concerns whether fast bowling will be the same again, whether pacers will be keen on 'unleashing' bouncers ever again? (Aussie PM Tony Abbott pays touching tribute to Phil Hughes)

Yet, given the kind of professionals in both teams, there should be no doubt in the minds of fans and pundits alike that once they step on the field, cricket will take precedence above all else. Celebrations could be muted, aggression too could be toned down but the level of competition will seldom be compromised. With Hughes in thoughts and prayers, cricket will definitely go on. (Phil Hughes funeral to be live telecast at SCG)

When Team India and Australia take the field for the first of the four-match Test series on December 9, mercurial pacer Mitchell Johnson will take centre-stage again. With his devastating exploits in the Ashes 2013/14, Johnson has attained a superhero status - loved and worshipped by his own, loathed and feared by oppositions. (Sachin, fans pay emotional tribute to Phil Hughes)

The rejuvenated pacer, who missed the home leg of the back-to-back Ashes series in 2013, came out hammer and tongs at the English batsmen who had no answer for his sheer pace and unnerving aggression. That Johnson enjoyed a spectacular year as a tearaway fast bowler was duly recognised when he was named the Cricketer of the Year as well as Test Cricketer of the Year in the ICC awards 2013/14.

With a menacing smile, a cold stare and some harsh words to offer to any batsman who dares to stand up to his blistering pace, Johnson has become a serious topic of discussion and dissection in every opposition camp.

India's stand-in skipper Virat Kohli too has put his best foot forward in terms of psychological games ahead of the series, saying he and his boys are ready to take on Johnson's ruthless attack.

Yet, the visitors need to be fully aware of the fact that this Australian setup is not a one-man act. The sooner Kohli's boys acknowledge the entire ensemble of the strong Australian side, the better it will reflect on the overall result.

The Australian management would have seen Indian batsmen's abject failure in England over and over again to find and note down glaring flaws in their approach. Some of the best in the business like Kohli and Cheteshwar Pujara were left licking their wounds after repeated failures due to their inability to judge the pace and bounce on 'alien' English wickets. The conditions in Australia will be no different.

If Johnson is giving any of the Indian batsmen sleepless nights, the fact that work-horses like Ryan Harris and Peter Siddle will operate from the other end should be equally terrifying. Johnson walked away with all the accolades in the Ashes 2013/14 series, with 37 wickets across five Tests. While Johnson bowled as many as 188 overs, Harris (22 wickets) and Siddle (16 wickets) filled in as perfect side-kicks with 166 and 156 overs respectively. When Johnson was busy hogging the limelight, Harris and Siddle were doing an excellent job of keeping the other end tight to ensure Australia never took their foot off the pedal.

To add to the troika of pace demons, skipper Michael Clarke also has 23-year-old Josh Hazlewood in his arsenal of pacers. Hazlewood, who made his ODI debut in 2010, made an impact with 9 wickets at an excellent economy rate of 4.82 in the recently-concluded ODI series victory at home over South Africa. The youngster, fresh and in-form, is line for a debut in the first game.

Kohli's Team India have their task cut out. If they have learnt anything from the failures in England, which Mahendra Singh Dhoni has repeatedly insisted that they have, they should be able to counter the Australian attack to good effect. But if they repeat their follies, India could be in for another massive drubbing Down Under.

Comments
Topics mentioned in this article
India Cricket Team Australia Cricket Team Aus vs Ind, 2014-15 Mitchell Johnson Ryan Harris Peter Siddle Cricket
Get the latest updates on ICC T20 Worldcup 2022, check out the Schedule and Live Score. Like us on Facebook or follow us on Twitter for more sports updates. You can also download the NDTV Cricket app for Android or iOS.