One Can Run Even in Pollution: Eliud Kipchoge, Delhi Half Marathon Winner

Delhi Half Marathon winner Eliud Kipchoge said he remained unaffected by the pollution However, some Indian athletes complained about irritation 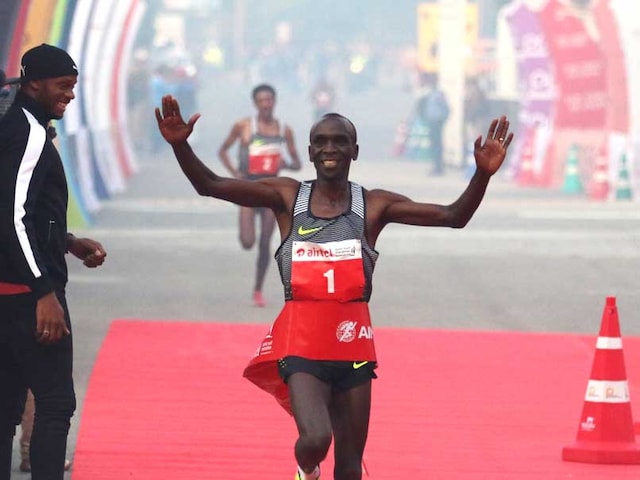 If a Kenyan Olympic champion can risk his lungs competing in severe pollution, so can the Delhites feels Airtel Delhi Half Marathon winner Eliud Kipchoge posed for the sceptics at the end of the race.

"The first reason that I came here is to run in a city that is polluted is to inspire a whole generation, a country to take up sports. In this way, the Indians can train openly in the morning, afternoon and there is no harm. If you train well, the job is done," the Rio Olympic gold medalist said after winning the USD 270,000 event.

"I came here purely for running in a polluted city. For the past 4 days that I'm here, I've been reading on twitter about the pollution scare but I told them it's not an issue. One of them told me "I don't allow my kids to run for more than an hour". I showed them that its okay by running for an hour today," the Kenyan added.

The other two podium finishers also remained unaffected by the pollution, both recording new personal best timings. But the Indian athletes complained about irritation due to the pollution.

"The pollution level caused a little irritation in the eye. The pollution level was 2-3 percent more than last year, people burst too many crackers this time on Diwali," second place winner of the Elite Indian mens category, Mohammed Yunus said in jest.

Pollution was not the only factor causing trouble to the Indian athletes, they also faced trouble by the water sprayed on roads.

"The water sprayed on the road was a bit problematic, I was slipping because of it" winner of the Elite Indian men's category G Lakshmanan said.

"The water on the road was causing us to slip. Our body pushes forward but because of the water it was not able to pull itself," third place winner of the Elite Indian men's category, Man Singh added.

On questioning about the gap between the foreign athletes and the Indian athletes Yunus was quick to defend.

"If we are given a chance to train outside with the international athletes, than we will also be at their level. They train at an higher altitude than us, hence they have a better lung capacity than ours," he replied to the query.