An arbitration panel in Switzerland ruled that it was not necessary for I.A.A.F., track and field's governing body, to exclude female athletes with high testosterone levels. The court was ruling on a case involving the Indian sprinter Dutee Chand that is the latest demonstration that biological gender is part of a spectrum. 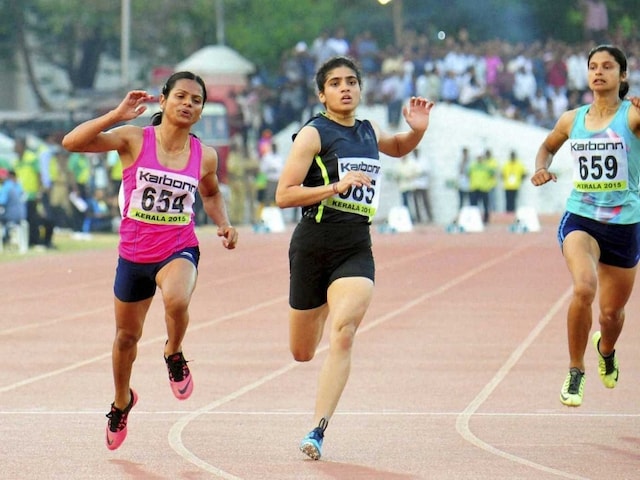 The final appeals court for global sports on Monday further blurred the line separating male and female athletes, ruling that a common factor in distinguishing the sexes - the level of natural testosterone in an athlete's body - is insufficient to bar some women from competing against females. (Mo Farah Questioned For Five Hours For Doping)

The Court of Arbitration for Sport, based in Switzerland, questioned the athletic advantage of naturally high levels of testosterone in women and immediately suspended the "hyperandrogenism regulation" of track and field's governing body. It gave the governing organization, known as the IAAF, two years to provide more persuasive scientific evidence linking "enhanced testosterone levels and improved athletic performance." (Click here for latest in Athletics)

The court was ruling on a case involving the Indian sprinter Dutee Chand that is the latest demonstration that biological gender is part of a spectrum, not a this-or-that definition easily divided for matters such as sport. It also leaves officials wondering how and where to set the boundaries between male and female competition.

The issue frustrates governing bodies and riles fans and athletes. Among those who testified in support of the IAAF policy was the British marathon runner Paula Radcliffe, who holds the event's world record among women. According to the ruling, Radcliffe said that elevated testosterone levels "make the competition unequal in a way greater than simple natural talent and dedication." She said that other top athletes shared her view.

"The concern remains that their bodies respond in different, stronger ways to training and racing than women with normal testosterone levels, and that this renders the competition fundamentally unfair," Radcliffe said of hyperandrogenic athletes.

The court recognized the complexity of an issue that so many, for so long, had considered a simple matter: Is the athlete a man or woman?

The panel said it "was unable to conclude that hyperandrogenic female athletes may benefit from such a significant performance advantage that it is necessary to exclude them from competing in the female category."

If sufficient evidence is not presented within two years, the hyperandrogenism regulation will be declared void, the panel said. The IAAF said in a statement that it would meet with its experts and the International Olympic Committee to determine its course of action.

"Although athletics events are divided into discrete male and female categories, sex in humans is not simply binary," the panel added. "As it was put during the hearing: 'Nature is not neat.' There is no single determinant of sex."

It continued: "Nevertheless, since there are separate categories of male and female competition, it is necessary for the IAAF to formulate a basis for the division of athletes into male and female categories for the benefit of the broad class of female athletes. The basis chosen should be necessary, reasonable and proportionate to the legitimate objective being pursued."

Chand, India's 18-and-under 100-meter champion and an Olympic hopeful, was diagnosed with hyperandrogenism and barred from competing against women in 2014 because her natural levels of testosterone exceeded guidelines for female athletes. Now Chand, and other women who may have similar conditions, can participate in international competition, perhaps including at next year's Summer Olympics in Rio de Janeiro.

"What I had to face last year was not fair," Chand said in a statement released by a Toronto law firm that represented her. "I have a right to run and compete. But that right was taken away from me. I was humiliated for something that I can't be blamed for. I am glad that no other female athlete will have to face what I have faced, thanks to this verdict."

The panel was ruling specifically on track and field's regulation, but the Court of Arbitration for Sport's wide jurisdiction means its decision should serve as a precedent for other sports around the world.

It was just the latest high-profile case to confront the intensely disputed boundaries of fairness in track and field in recent years. The South African sprinter Oscar Pistorius, for example, eventually won the right to compete at the 2012 Summer Olympics in London using prosthetics. In a case more clearly linked to that of Chand, the South African runner Caster Semenya in 2009 was barred from competition and reinstated nearly a year later after a series of gender tests and much publicity.

Two opponents of Semenya's in the 800 meters objected to her participation in the 2009 world championships.

In 2011, the IAAF established guidelines requiring female athletes to have testosterone levels below 10 nanomoles per liter, the lower end of the male range.

At the London Olympics, four female athletes, all 18-21 years old and from rural areas of developing countries, were flagged for high levels of natural testosterone. Each of them subsequently had surgery to remove internal testes, which produce testosterone, as well as procedures unnecessary for resuming competition: feminizing vaginoplasty, estrogen replacement therapy and a reduction in the size of the clitoris.

Chand eschewed recommendations that she take hormone-suppressing drugs or have surgery to limit the amount of testosterone her body produces. She appealed to the Court of Arbitration for Sport, questioning why she should be forced to have surgery if her condition was natural and she was not ill.

"I want to remain who I am and compete again," she said last fall.

The Chand decision will force the IAAF to devise a different way to divide the spectrum. It ruled that it remained inappropriate to subject athletes to gender verification, external genitalia examinations or chromosome testing. It declared that there was no dispute that Chand was a woman, and no one suggested that her levels of testosterone were anything but natural.

"I am shocked and heartened by CAS' decision," said Katrina Karkazis of the Center for Biomedical Ethics at Stanford University, who helped argue Chand's case. "I didn't think it was our time. Dutee has made history with her courageous decision to challenge a policy she felt was unfair to her and to all women athletes. It's a victory for women's equality in sport. And I'm thrilled she can just now run."