Don Bradman and Steve Smith have been mentioned repeatedly in the same breath since Smith hit innings of 144 and 142 during Australia's win over England in the first Test. 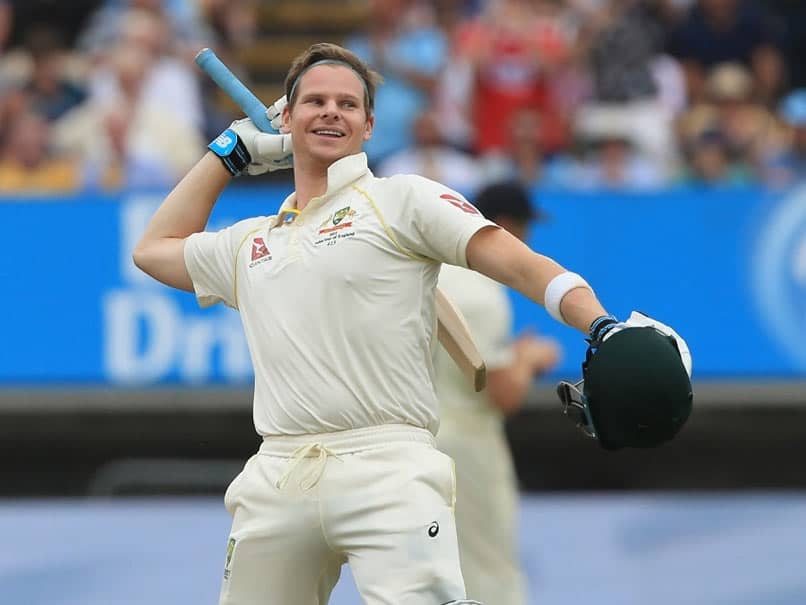 After one Test of the current Ashes series, Steve Smith has 286 runs in the bag.© AFP

An Australia batsman with a technique that departs from the coaching manual piling on the runs in the Ashes -- England have been here before. But should Steve Smith be compared to the greatest of them all, Don Bradman? The pair have been mentioned repeatedly in the same breath since Steve Smith hit innings of 144 and 142 during Australia's 251-run win over England in the first Test at Edgbaston, a triumphant return to Test cricket following a 12-month ban for his role in a ball-tampering scandal. Yet amid cricket's welter of statistics, one figure stands alone -- Don Bradman's Test batting average of 99.94.

Taking 20 innings as the minimum qualification, Steve Smith is currently second to Bradman with 62.96.

No one either before and certainly not in the 70 years since Bradman played his last Test in 1948 has come close to that mark of nearly a 100 runs per innings in the format.

Whereas Smith missed a year of Australia cricket duty at the height of his career, Bradman missed several, not for breaking the rules but because of the interruption to international sport caused by World War II.

In his first Test back in 1946, Bradman made 187 against England in Brisbane and followed up with 234 in Sydney.

Yet by scoring two hundreds in an Ashes Test, the 30-year old Smith managed a feat that proved beyond 'The Don'.

Some observers deprecated Bradman's fondness for the pull, while a stance that saw him pick up his bat from a position between his feet rather than behind the back foot was certainly unorthodox.

These, however, seem like minor 'imperfections' compared to the way in which the fidgety Smith -- who has his laces taped to his boots as he does not like to see them  -- shuffles across his crease before each ball he faces.

Such an approach ought to make Smith a prime candidate for lbw yet he has scored five centuries in his past six Ashes Tests, averaging 139.

But there is method in all of this. As Smith explained two years ago, he used to take guard on middle stump and not have a 'trigger' foot movement. However, he found this left him vulnerable to edges outside off stump, a common mode of dismissal for most batsmen.

Smith tried to counter this by taking guard on leg stump and moving right across, which played to his strength off his pads.

"It's a big movement," he said, "but for me it's about trying to minimise the ways that you get out.

"If guys get me out lbw, I say well played, congratulations but, if I nick one off, that's when I get upset at myself."

England won the 1932/33 Ashes in a series where they curbed Bradman's average by deploying the infamous 'Bodyline' tactic of fast, short-pitched bowling to a packed legside field.

Such an option is no longer available to current England captain Joe Root, whose revamped bowling attack will have to hold their nerve against Smith during this week's second Test at Lord's.

Neil Harvey, the last surviving member of the 'Invincibles' -- the Australia side captained by Bradman that won the 1948 Ashes in England 4-0 as part of an unbeaten 34-match tour -- is well placed to assess both his old skipper and Smith, stripped of the Australia captaincy last year after the ball-tampering row.

"He (Smith) showed a lot of resolve -— he must've got a lot of heckling from the crowd (at Edgbaston), he just put his head down and made runs," Harvey told the ABC.

Harvey, now aged 90, was an Australian legend himself, averaging 48.41 in 79 Tests, but he shies away from making comparisons between Bradman and Smith.

"I think if you're a great player in any era you can fit in somewhere no matter who you're playing with or against. But I'm not one to compare people, you just can't do it. The game changes so much."

In the 1930 Ashes in England, Bradman scored an unparalleled 974 runs as the Aussies won the series 2-1.

After one Test of the current series, Smith has 286 runs in the bag. If he can get anywhere near that Bradman record, then Australia will likely retain the Ashes and the comparisons will grow even louder.

Steve Smith Don Bradman The Ashes 2019 Cricket
Get the latest updates on India vs England Series, India vs England , live score and IPL 2021 Auction . Like us on Facebook or follow us on Twitter for more sports updates. You can also download the NDTV Cricket app for Android or iOS.