Tim Paine described Steve Smith as a "freak" after he took a stunning diving slip catch late on to see the back of Chris Woakes. 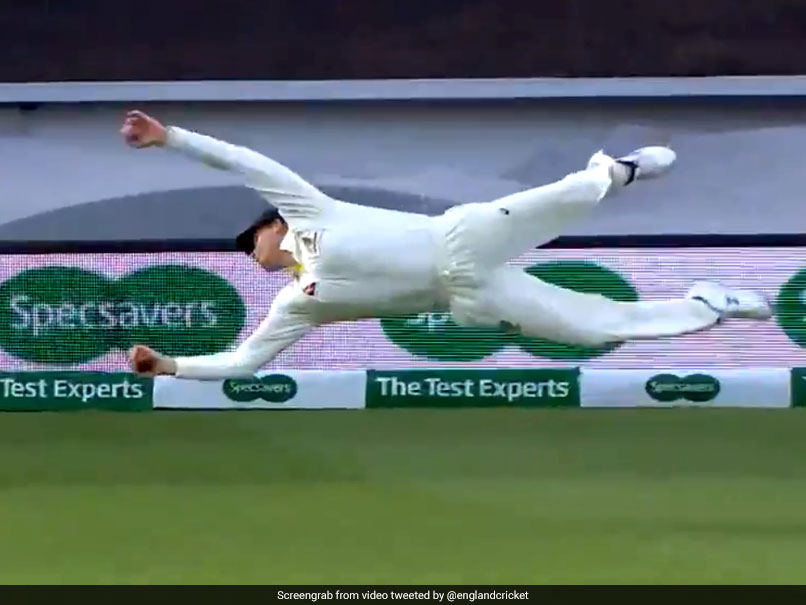 Steve Smith has been nothing short of exceptional with the bat in the ongoing Ashes 2019 series in England, helping Australia retain the Ashes urn. On Saturday, the former Australia captain showcased his brilliance in the field. Standing at second slip, Steve Smith leapt to his right to pull of a sensational one-handed catch to send Chris Woakes packing. After the end of play on Day 3 of the fifth and final Test, Australia captain Tim Paine described his top-scorer Steve Smith as a "freak" for completing the stunning diving slip catch late on.

"He's just a freak. We were actually chatting about it out there at one point about batsmen like him seem to always be in the game," said the Australian skipper.

"Cricketers like him, I think Stokes is the same, they're just in the contest and in the game all the time whether they are at slip or at point or with the ball or with the bat," he said.

"That's what makes great cricketers great because they're always in the contest, they're always aware of what's happening. It was a pretty special catch late in the day after he's been batting for seven weeks straight."

Great catches from the Aussies tbf

Despite Steve Smith's best efforts, England seized control on the third day of the fifth Ashes Test, building a massive lead of 382 runs.

With two full days of play to come and the weather in London set fair, the home side, on 313-8 in their second innings, appear certain to pull level at 2-2 barring a miraculous fightback from Australia.

World Cup winners England are aiming to restore pride in the final Test of the series even though Australia have already retained the Ashes urn.

Root has plenty of time to play with but will be wary of declaring too soon as India last year made 345 batting fourth at the Oval chasing 464.

The tourists came into the match hungry to wrap up their first series victory in England since 2001 after winning last week's fourth Test to take a 2-1 lead but look as though they will come up short.

Chris Woakes The Ashes 2019 England vs Australia, 5th Test Cricket
Get the latest updates on ICC Women's Cricket World Cup 2022 and IPL 2022, check out the Schedule , Live Score and IPL Points Table. Like us on Facebook or follow us on Twitter for more sports updates. You can also download the NDTV Cricket app for Android or iOS.