"He Got Me": Jonny Bairstow's Fake Fielding Trick Works Like A Charm On Steve Smith. Watch Video

Jonny Bairstow gave Steve Smith a mighty scare when the Australian was scampering to complete a run. 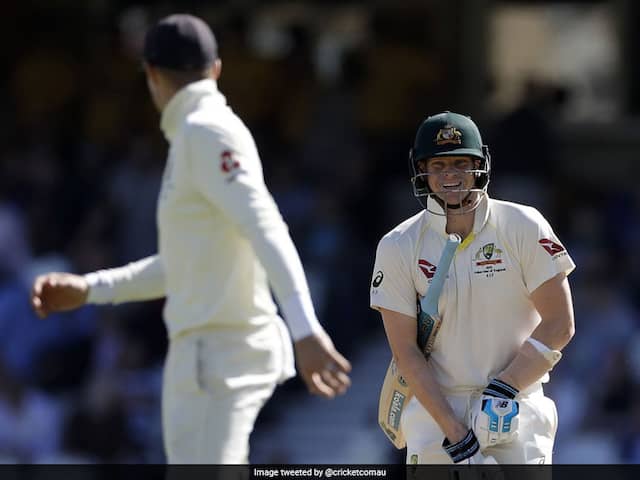 Steve Smith was completely fooled by Jonny Bairstow as he was completing a run.© Twitter

Steve Smith yet again produced a fine knock, scoring a solid 80 -- his lowest total of a sensational Ashes series -- in Australia's first innings of the fifth and final Test at the Oval. Steve Smith has now amassed 751 runs, a sizeable chunk of the team's overall tally of 2,508 runs over the entire series even though he has missed three of the nine innings after being hit by a Jofra Archer bouncer. England have done all they can to get rid of the Australian early but to no avail. On Friday, Jonny Bairstow gave Steve Smith a mighty scare when the Australian was scampering for a run.

Bairstow positioned himself as if he was about to collect the ball, resulting in Steve Smith diving full length to get back into the crease. The ball, however, was no where near the English keeper and the former Australian skipper admitted later that he had been done in by Bairstow.

After the day's play, Smith was asked about the incident.

"He got me there, didn't he? Dirtied my clothes. He didn't say anything, I don't think but he got me. I didn't know where the ball was. Bloody thing. Faked it. He got me. I don't know what else to say," said Steve Smith.

Steve Smith was in no danger of being run out here ... but Jonny Bairstow made him think he was! #Ashes pic.twitter.com/YajKdVcmc8

Australian cricketer Andrew Tye, as well as some fans were quick to point out that England should have been penalised as per the new laws against mock fielding.

Is that not fake fielding? #Ashes

Is that not fake fielding? As much as I hate the rule, isn't that why it's there?

Remember this if Australia loses by five runs or less. #Ashes @FakeFielding https://t.co/jlKhIhkuas

Jonny Bairstow with the fake fielding there but only the Aussies cheat.

According to the MCC's new Law 41.5: "it is unfair for any fielder willfully to attempt, by word or action, to distract, deceive or obstruct either batsman after the striker has received the ball."

The umpires have the discretion to award five penalty runs if they determine that such deception is wilful.

Jonny Bairstow The Ashes 2019 England vs Australia, 5th Test Cricket
Get the latest updates on IPL 2020, check out the IPL Schedule for 2020 and Indian Premier League (IPL) Cricket live score . Like us on Facebook or follow us on Twitter for more sports updates. You can also download the NDTV Cricket app for Android or iOS.