Jofra Archer produced a hostile and compelling display on debut as the rain-affected second Ashes Test ended in a draw at Lord's on Sunday. 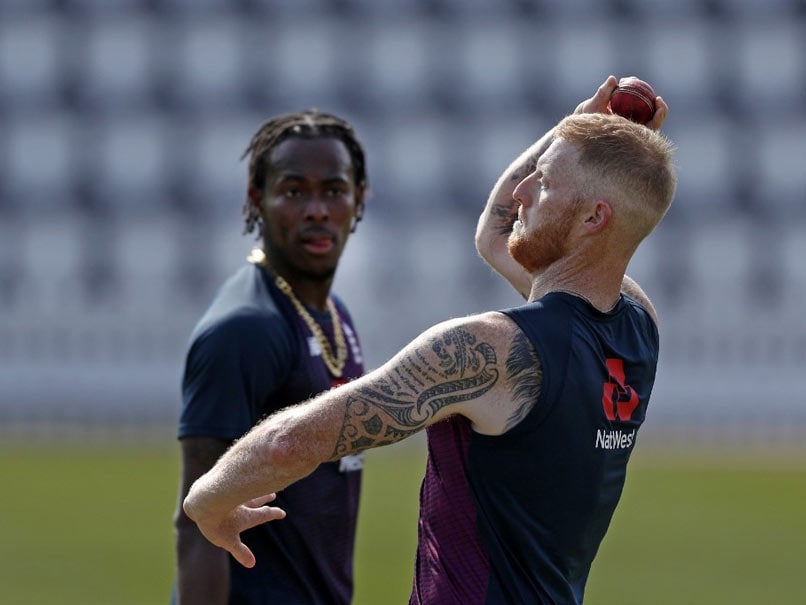 Ben Stokes has told Australia to expect more bouncers from Jofra Archer in the remainder of the Ashes.© AFP

England's Ben Stokes has told Australia to expect more bouncers from Jofra Archer in the remainder of the Ashes 2019. "It's part of the game and a big part of Jofra's game, being aggressive, not letting batsmen settle," said Stokes. World Cup-winning fast bowler Jofra Archer produced a hostile and compelling display on debut as the rain-affected second Test ended in a draw at Lord's on Sunday. Not only did he take five wickets, he repeatedly unsettled Australia with a short-pitched balls. The 92mph bouncer that hit Steve Smith on the neck forced the star batsman to miss the last day with concussion.

"When someone takes a nasty blow no bowler is going to say 'I'm not going to bowl that again because I don't want to hit them again'," Stokes, a lively seam bowler, added.

"The concern is always there when someone takes it, but next ball, when you get back to the mark, it's 'I'm going to keep doing it'."

Smith, who could be ruled out of the third Test at Headingley starting on Thursday as well, had earlier been hit a painful blow by Archer on his left forearm.

Marnus Labuschagne, Smith's replacement at Lord's as cricket's first concussion substitute, was then hit flush on the grille of his helmet second ball by another Archer thunderbolt.

All the deliveries are considered a legitimate part of a fast bowler's armoury and Stokes said Archer had no reason to change his approach in Leeds.

Stokes believes Archer's extra pace can help England overturn a 1-0 deficit in the five-match Ashes series following their 251-run loss in the first Test at Edgbaston.

"Everything is so rhythmical with Jofra it is tough to see when that bouncer is coming," said Stokes.

"He gives another dimension to our bowling attack. The first innings he bowled 29 overs but his last spell of eight was one of the best out-and-out fast bowling spells I have seen since I started playing," he added.

"We've seen (Australia's) Mitchell Johnson do it to us, especially in 2013, but Jofra just makes it look so easy. I'd rather have him on my team than have to face him. He's a frightening talent.

"The sky is the limit for him and he's a great addition to our Test team."

England's top order remains a concern but after all-rounder Stokes's elevation to number five in the second innings at Lord's, he scored an impressive 115 not out.

"It just depends on what happens in the game," he said.

"I went to six because my bowling workloads have gone up in the last few years. I'm sure it will change.

"We're a very versatile batting line-up, some days it might be Jonny Bairstow at five, some days Jos Buttler, some days me. We're all capable, it just depends on workloads."