Jofra Archer took six wickets as England bowled Australia out for 225 to gain the upper hand on Friday despite another Steve Smith masterclass. 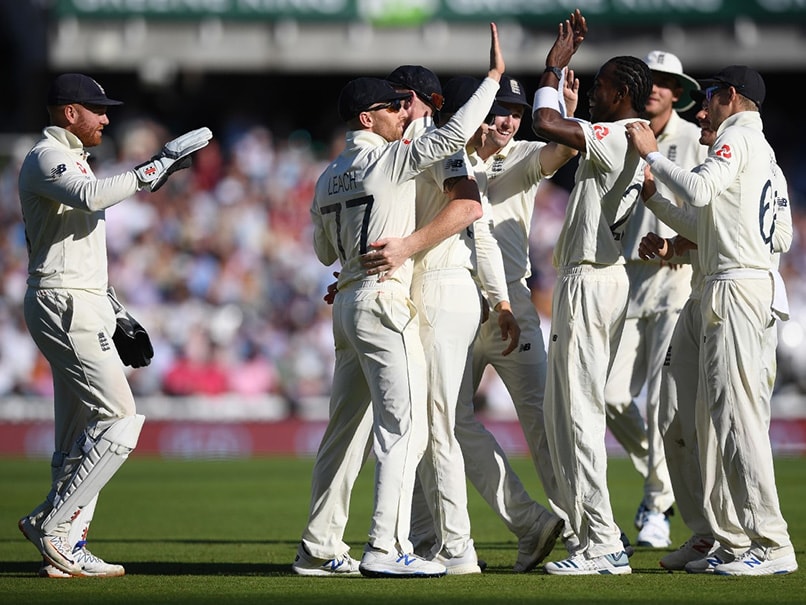 Joe Denly (1 not out) and Rory Burns (4 not out) survived early scares as England posted 9/0, to take a 78 runs lead, at stumps on Day 2 of the fifth Ashes Test. Earlier, Jofra Archer took six wickets as England bowled Australia out for 225 to gain the upper hand on Friday despite another Steve Smith masterclass. Joe Root's team are desperate to level the series at 2-2 to end their historic World Cup-winning season on a high but have been consistently dogged by the peerless Smith. The former Australian skipper has now amassed 751 runs in just six innings -- more than double the tally of the next highest runscorer on either side.

But he was forced to settle for his lowest score of the series -- 80 -- when Chris Woakes trapped him lbw in the evening session, leaving the sun-drenched Oval crowd dumbfounded.

Despite a late flurry of runs, Australia had to settle for a first-innings deficit of 69, with paceman Archer finishing with figures of 6/62.

Smith came to the crease with Australia in trouble at 14/2 in reply to England's first-innings total of 294 after Archer had removed openers David Warner and Marcus Harris.

Smith, who only returned to Test cricket last month following a year-long ban for his role in a ball-tampering scandal, was watchful at the start of his innings.

But he soon found his touch, bringing up his 10th consecutive Ashes fifty with a six over midwicket off left-arm spinner Jack Leach.

Smith appeared to be playing a completely different game from all the other batsmen but he had a lucky escape after tea when, on 66, he edged a Sam Curran delivery to Root in the slips, only for the England skipper to shell the chance.

Earlier, Warner, who was also banned over the ball-tampering scandal, was again dismissed for single figures, caught behind by wicketkeeper Jonny Bairstow.

It was the eighth time that Warner had been dismissed in single figures in the series.

Archer then struck again with a 90-miles-per-hour thunderbolt, with Ben Stokes holding onto a sharp chance from Harris at second slip.

That dismissal brought Smith to the crease and he was immediately greeted with a sharp bouncer, much to the delight of the packed crowd.

Smith and Marcus Labuschagne repaired the early damage, putting on 69 for the third wicket before Archer struck again, trapping Labuschagne lbw for 48.

Matthew Wade was lbw to Sam Curran for 19 as Australia slipped to 118-4 but the unruffled Smith eased to his half-century off 91 balls.

Smith's dismissal left Australia 187-8 but Peter Siddle and Nathan Lyon played enterprisingly to add 37 for the ninth wicket, with Lyon smashing Woakes for a six over square leg.

At the start of the day England added just 23 runs to their overnight score, with Jos Buttler out for 70.

Marsh took five wickets on his return to the Test side while Pat Cummins took three.

Australia won at Old Trafford last week to take a 2-1 lead in the series, meaning they will retain the Ashes urn regardless of the result at the Oval.

But they are hungry to wrap up their first series win in England since 2001.

Australia Cricket Team The Ashes 2019 England vs Australia, 5th Test Cricket
Get the latest updates on IPL Auction 2023 and check out  IPL 2023 and Live Cricket Score. Like us on Facebook or follow us on Twitter for more sports updates. You can also download the NDTV Cricket app for Android or iOS.