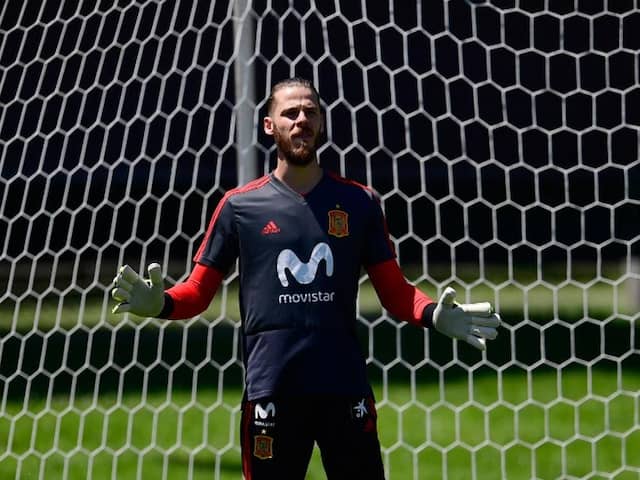 De Gea said his full focus was now on the World Cup.© AFP

A miffed Spain goalkeeper David De Gea on Monday called for a public apology from the country's Prime Minister Pedro Sanchez over both parties disagreeing over a sex assault case involving the player before Euro 2016. The Spanish PM met the Spain team last week when he attempted to ease the tension by apologising in person to De Gea, according to an ESPNFC report.

De Gea had previously denied any involvement in the sex assault case with no evidence found against him.

Sanchez though said he "didn't feel comfortable" with De Gea as Spain goalkeeper at Euro 2016.

"I politely accepted his apology. The issue is that what he said back in the day was in public and that is why I think the apology should also be a public one," De Gea was quoted as saying by Diario AS.

"It's also true that the majority of people in the public eye that disrespected me have not even apologised to me in private.

"It's easy to talk about others in this country. I always said that it was a lie and yet people continued saying that I should not go to the national team.

"In the end, things are proven and we saw that it was all a lie. It personally didn't affect me much but obviously I have people close to me that are affected by this more than me. But it's water under the bridge."

There is talk of De Gea, rated as one of the best in the world, jumping ship from Man United to Real Madrid.

De Gea said his full focus was now on the World Cup. "The important thing is the World Cup -- there cannot be anything else to turn your attention away from that," the 27-year-old said.

"We have to be focused. It's very important to have a good World Cup and I hope we can go far and win -- that would be amazing.

"Football is football and a thousand things can happen. But I'm always calm and come my way, I will continue to be the same. I just want to be 100 percent focused on the World Cup."

Spain take on European champions Portugal in their Group B opener on June 15. De Gea said he is ready to counter star Real marksman Cristiano Ronaldo.

"He is a great player, one of the best in the world," he said. "But Portugal is not only Cristiano, they have a great national team, they won Euro 2016.

"We also have a great national team, and it will be a tough game. We will try to do our best."

David de Gea 2018 FIFA World Cup Football
Get the latest updates on IPL 2020, check out the IPL Schedule for 2020 and Indian Premier League (IPL) Cricket live score . Like us on Facebook or follow us on Twitter for more sports updates. You can also download the NDTV Cricket app for Android or iOS.