Iceland got a lifeline in the 82nd minute with a VAR-awarded penalty but dead-ball specialist Gylfi Sigurdsson blazed over the bar. 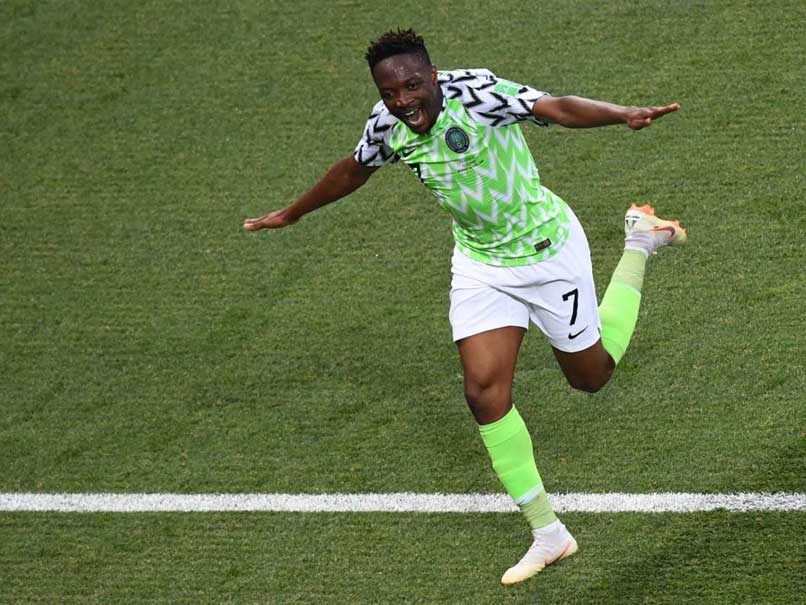 Ahmed Musa struck twice to become the first Nigerian to score at two World Cups Friday as the Super Eagles secured a crucial 2-0 win over Iceland, who missed a penalty. The African side will secure a spot in the knockout stage if they beat Argentina on Tuesday in Group D's final round of fixtures.  A draw would be enough to eliminate the Argentines but would leave Nigeria's fate hinging on the outcome of Iceland's game against Croatia. Musa, who came into the starting line-up in place of Alex Iwobi, announced himself with two of the goals of the tournament so far. Musa's sweetly struck half-volley fired Nigeria into the lead just after half-time before he added a second with 15 minutes to go to make the Group D game safe.

Iceland got a lifeline in the 82nd minute with a VAR-awarded penalty but dead-ball specialist Gylfi Sigurdsson blazed over the bar.

With Croatia heading the group on six points Nigeria knew a second defeat would mean elimination and Iceland started brightest after coach Heimir Hallgrimsson changed to a 4-4-2 from the 4-5-1 he had used in the 1-1 draw with Argentina.

Alfred Finnbogason, who scored the equaliser against Argentina as a lone striker, was joined up front by Jon Bodvarsson and the pair quickly made an impact.

Captain Aron Gunnarsson launched a long throw into the box and, after Bodvarsson had made a nuisance of himself, a push gave Iceland a free-kick just outside the area.

Gylfi Sigurdsson struck it smoothly round the wall but 19-year-old goalkeeper Francis Uzoho was able to make the save high to his right.

Nigeria, with captain John Obi Mikel sitting deeper in midfield than against Croatia, slowly worked their way into the game with Victor Moses a constant threat on the right flank.

The pace inevitably dropped with the temperature still a stifling 31 Celsius at the 6:00 pm (1500 GMT) local time kickoff.

The match became a stalemate until 10 minutes before half-time when Iceland came close to opening the scoring but Leon Balogun's glancing header just did enough to thwart Gylfi Sigurdsson and Birkir Bjarnason lurking at the back post.

And on the stroke of half-time Finnbogason came within a whisker of doubling his World Cup tally when he flashed wide Gylfi Sigurdsson's whipped in free-kick.

Gerhot Rohr brought on wing back Tyronne Ebuehi for Bryan Idowu at the start of the second halfand Nigeria came out full of running.

The tireless Moses was released down the right and his cross was met by Musa who teed up the ball deftly with the outside of his right foot before unleashing an unstoppable half-volley into the roof of the net.

As he wheeled away in celebration his knee caught Ragnar Sigurdsson in the back of the head and the Iceland defender needed treatment, a bandage and a change of shirt after sustaining a nasty cut.

Wilfred Ndidi forced Hannes Halldorsson into a fine fingertip save with a wickedly dipping shot from distance in the 58th minute.

Musa made the game safe with his second, controlling a long ball without breaking stride and beating Kari Arnason before rounding Halldorsson and powering his shot past two covering defenders on the line.

Iceland 2018 FIFA World Cup Ahmed Musa Nigeria vs Iceland, Match 25 Football
Get the latest updates on ICC T20 Worldcup 2022, check out the Schedule and Live Score. Like us on Facebook or follow us on Twitter for more sports updates. You can also download the NDTV Cricket app for Android or iOS.