Son is a star in his home country, to the extent he has to wear a disguise when he leaves the house and Korean journalists are employed in London, where they wait to speak to the forward after every Tottenham fixture in the Premier League. 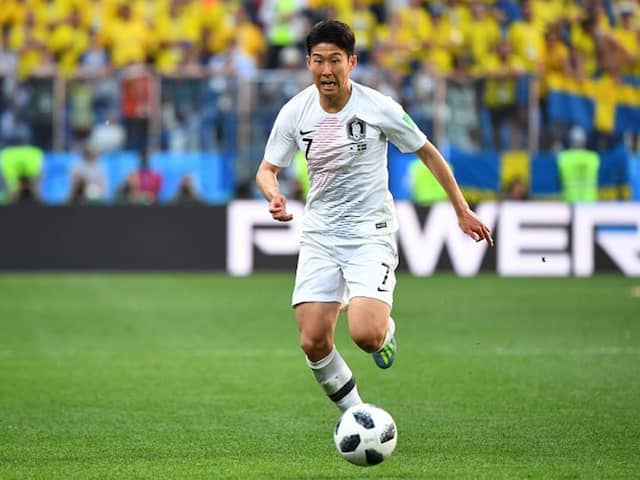 The pressure is on Son Heung-min to step up.© AFP

South Korea's Son Heung-min is bearing the weight of expectation at the World Cup just as heavily as Mohamed Salah, Cristiano Ronaldo and Harry Kane. Even Lionel Messi, whose bid to add a World Cup to his career collection has become something of a communal objective for football, enjoys the support of a star-studded Argentinian side, from Angel Di Maria to Javier Mascherano to Sergio Aguero. For Son and South Korea, the pressure is shared in the kind of unequal measure that perhaps only Salah would know with Egypt, before his own tournament was hampered by injury. South Korea are teetering on the brink too, after a 1-0 defeat by Sweden left them needing at least a draw, and probably a win, against Mexico on Saturday to keep any hopes of progressing from Group F alive. Son blamed himself for the opening loss. "I'm still disappointed about my performance," he said. "I feel very, very sorry for my team-mates because if we don't score, it's my fault, because I need to take the responsibility." Responsibility is one take, pressure another.

Son is a star in his home country, to the extent he has to wear a disguise when he leaves the house and Korean journalists are employed in London, where they wait to speak to the forward after every Tottenham fixture in the Premier League.

But for all the attention he receives, the 25-year-old, who moved to Germany when he was 16 and made his name at Hamburg and Bayer Leverkusen, is humble, driven and immensely popular with his team-mates.

He still lives in Barnet with his parents. His father, Son Woong-jung, is a former striker himself, whose professional career was cut short by injury.

Tottenham's training ground, based nearby in Enfield, has housed Korean chefs, invited in by Son in the hope of ingratiating his team-mates to bulgogi (barbecued beef), japchae (stir-fried noodles) and Samgyetang (a type of chicken soup).

Not the star at Spurs

But for Spurs, Son plays behind Kane, and alongside Dele Alli and Christian Eriksen. He is a key player, but not the star.

"It is true that maybe he doesn't get the headlines of Harry Kane and other players but it is good to recognise him," Tottenham coach Mauricio Pochettino said.

"It's like a player next to [Lionel] Messi or Cristiano Ronaldo that also deserves a lot of credit.

"When you are next to Harry Kane, who scores and scores, it is normal that the focus is more on Harry Kane or on Messi or Ronaldo than on Son.

"But all the team love him. Not only because of his performances but because of how he is as a man. He is so humble and such a normal guy, and that makes him bigger."

Son certainly does not feel disappointments any less. In fact, those that know him well say he takes defeats harder than anyone.

He sat on the pitch and bawled his eyes out when South Korea lost to Honduras in the quarter-finals of the 2016 Olympics in Brazil, a result that could still have repercussions for Son's future.

As is the law in South Korea, he owes 21 months of military service and is due to begin his stint before he turns 28.

There is precedent for successful footballers being granted exemption, as was the case in 2002, when the national team reached the World Cup semi-finals, and 2014, when they won the Asian Games.

Son missed out four years ago as Bayer Leverkusen refused to release him and there may be a similar dilemma for Tottenham to confront when the same tournament runs again in Indonesia in August.

For now, though, South Korea need Son to deliver in Rostov against Mexico, the team that have inflicted the shock of the World Cup so far by beating Germany.

The pressure is on Son to step up.

"When he plays for the national team, the opposition focuses on defending against Son Heung-min," South Korea's coach Shin Tae-yong said last month.

"I think he's doing well but to become a big player, he has to overcome that barrier."

Mexico 2018 FIFA World Cup Rostov Arena Football Korea Republic vs Mexico, Match 28
Get the latest Cricket news, check out the India cricket schedule, Cricket live score . Like us on Facebook or follow us on Twitter for more sports updates. You can also download the NDTV Cricket app for Android or iOS.