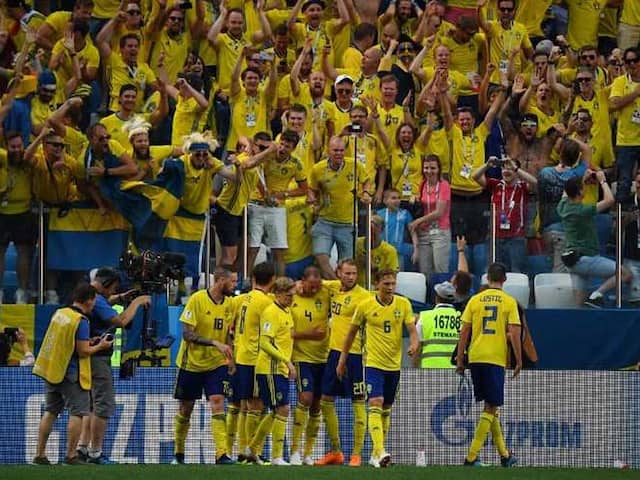 Sweden joint top of the group with Mexico.© AFP

A VAR-awarded penalty gave Sweden a narrow but deserved victory in their opening Group F match against a poor South Korea side in Nizhny Novgorod on Monday. Veteran Swedish skipper Andreas Granqvist scored the only goal of the game from the spot after Viktor Claesson was upended by South Korean substitute Kim Min-woo Kim in the 62nd minute. Despite furious appeals, El Salvadorean referee Joel Aguilar, who had ironically been whistle-happy up until that point, intially waved away Swedish penalty claims. But after consulting the video, he pointed to the spot. It was the third VAR penalty awarded at these championships after France and Peru also benefitted from video referrals. The win was reward for Sweden's more attacking approach, but it was unsurprising the winner came from the penalty spot in a game between two sides who had only managed two goals between them in seven games heading into Russia.

Sweden never really convinced that they would score prior to the penalty despite their domination and a toothless South Korea did not manage one shot on target.

However they should have equalised in the 90th minute but Hwang Hee-chan put a free header wide, spurning the Koreans' best chace of the game by far.

The victory leaves Sweden joint top of the group after Mexico's surprise victory against world champions Germany on Sunday.

Next up for the Swedes is an intriguing encounter against Germany in Sochi on June 23.

South Korea started the game brightly, forcing the first corner in the fourth minute, but were gradually forced back by an attritional Swedish side.

It was the Europeans who came closest to breaking the deadlock when forward Marcus Berg was denied by a fine point-blank save Jo Hyeon-woo in the 20th minute.

Despite their increasing dominance, Sweden also demonstrated why they have struggled to score goals.

Berg, again, and Claesson went close before the end of the half, but it was clear for everyone to see why they had only scored once in their four matches prior to Russia.

Korea threatened only on the break where Son Heung-min's pace troubled 33-year-old Granqvist, who was without defending partner Victor Lindelof, who was ill.

The somewhat rancorous build-up to the game -- where Sweden were accused of spying on their opponents -- was increasingly reflected in the niggly nature of the match.

Resilient Sweden held firm after the goal and the Hwang late scare aside, and a half-hearted South Korea appeal for a penalty, their defence rarely looked troubled.

The huge celebrations, the first match played in the $290 million stadium, at the end showed the importance the Swedes attached to this match.

Before the game, South Korea's coach Tae Yong-shin called it a "must win" game but the defeat leaves his side contemplating only an early exit.

Korea Republic 2018 FIFA World Cup Sweden vs Korea Republic, Match 12 Football
Get the latest Cricket news, check out the India cricket schedule, Cricket live score . Like us on Facebook or follow us on Twitter for more sports updates. You can also download the NDTV Cricket app for Android or iOS.