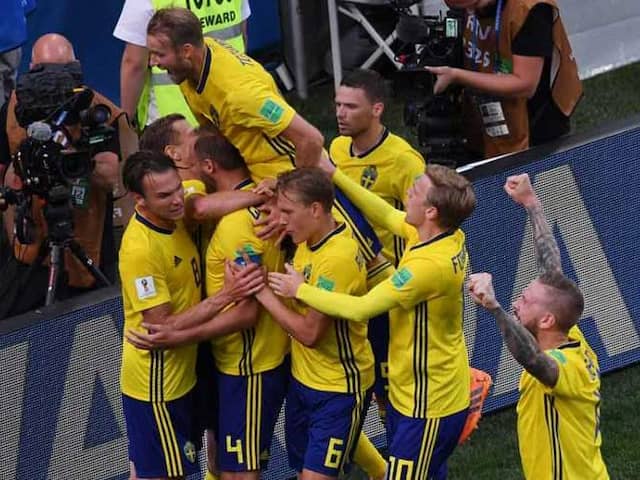 Sweden on Monday defeated South Korea 1-0 thanks to a penalty from captain Andreas Granqvist that was awarded after the referee took the help of VAR. Post the 65th-minute goal, the South Koreans tried really hard in the latter stages of the match to find an equaliser but were repelled by a stubborn Swedish defense. The penalty to Sweden was awarded after Kim Min-woo brought down Viktor Claesson with a clumsy challenge in the box. The referee ran to the sidelines to view the video of the incident and immediately pointed to the spot. Granqvist coolly slotted away the penalty to give his team a much-deserved lead. The Swedes were resolute in defense and denied South Korean attackers Son Heung-min and Hwang Hee-chan any opportunity to score. In the first half, the South Korean team started off strongly but the half belonged to Sweden, who had a multitude of chances to take the lead. Both teams went into the break goalless. South Korea failed to capitalise on their good start, rarely testing the Swedish goalie. As the game wore on, Sweden picked up steam and made regular inroads into the South Korean box but they too failed to score. The win for Sweden puts them in strong position in Group F with defending champions Germany losing their opening match to Mexico. (Highlights: Sweden vs South Korea)

19:130 IST: Thank you joining us on the live coverage of this match. For the live updates of the match between Belgium and Panama (CLICK HERE)

They join #MEX on three points in Group F after today's result against #KOR#WorldCup pic.twitter.com/K4EQFaRY7F

19:15 IST: 87 minutes are up! Its now or never for South Korea. Terrific defensive play from Sweden. South Korean fans are looking really tense in the stands.

19:10 IST: 82nd minute! Flurry of opportunities being created by the South Koreans' but Swedish defence is not allowing them to score.

19:09 IST: 80th minute! Free kick for South Korea but straight into the hands of the Swedish goalkeeper.

19:04 IST: South Korean team is on the charge now but Swedish defense has been strong.

18:59 IST: Substitutions for both the teams. Hiljemark is IN replaces Ekdal for Sweden while S W Lee comes IN for J C Koo.

18:57 IST: Corner for Sweden in the 70th minute. Cleared easily by the South Korean goalkeeper.

#SWEKOR | That was the first #WorldCup goal for #SWE since Henrik Larsson scored against #ENG in 2006... pic.twitter.com/IX05YL4vbw

18:49 IST: VAR called up and its a PENALTY for Sweden. Kim Minwoo with a horrific tackle in the 62nd minute and umpire after the review has pointed to the spot.

18:45 IST: So Close! number 11 Hwang Heechan puts in the cross but that was brilliant defense from the Swedish.

18:43 IST: That was a Brilliant Save from South Korean goalkeeper. Saves the ball inches away from the goal line.

18:35 IST: MISS! That was a terrific opportunity for Sweden but Emil Forsberg kicks the ball over the net. Another chance goes down.

Who will be the first to find the net in Nizhny Novgorod? #SWEKOR pic.twitter.com/XrjcIQYa1I

17:16 IST: 45+1': Brilliant header from Viktor Claesson off the corner kick but the ball sails over the net.

18:12 IST: Another nearly moment for Sweden. Marcus Berg brilliantly dodges the South Korean defense, but there is no one to collect the cross.

18:04 IST: Brilliant run from Heungmin Son but the cross has been blocked by Swedish defense.

18:00 IST: 30 minutes are up! Sweden are charging in hard but South Koreans have kept them away.

17:53 IST: After a strong start from South Korea, Sweden are now growing into the game. In the last two minutes Swedish are looking more aggressive with their attacks.

17:47 IST: Sweden on the charge! Last ditch tackle from Kim Younggwon, avoids the opener for Sweden.

17:45 IST: Fifteen minutes into the match! South Korea clearly seem to have an edge.

17:42 IST: First yellow-card of the match. Shinwook Kim penalized for a bad tackle.

17:40 IST: 10 minutes up! South Korean attackers are moving intelligently on the pitch and creating opportunities.

17:34 IST: Brilliant run from Hwang but the ball has been cleared by Swedish defense. First corner for South Korea, gets cleared.

17:23 IST: The atmosphere is electrifying here at the Nizhny Novgogod Stadium. Both teams are at the centre alongside match officials for the national anthems.

17:10 IST: Both teams are at the center, warming up ahead of their first clash of the tournament.

16:40 IST: Starting XI for both the teams announced.

TEAM NEWS // We have the teams for #SWEKOR... #WorldCup pic.twitter.com/l6e1oCpBc8

16:33 IST: South Korean team too has arrived at the picturesque Nizhny Novgogod Stadium. Ecstatic Korean fans are all geared up for the all important clash.

16:30 IST: Hello and welcome to the live match updates of the Group F match between Sweden vs South Korea

Beginning in 2002, South Korea have not lost any of their first World Cup matches, collecting three wins and one draw. Neither team had an impressive World Cup tune-up before landing in Russia. South Korea played to a scoreless draw with Bolivia and fell 0-2 to Senegal in their friendly matches in Austria. Sweden had 0-0 draws with Denmark and Peru in their World Cup warm-ups at home. There has been an off-pitch battle between the two sides ahead of their Group F clash.

Sweden claimed they've analysed all of South Korea's closed door training in Austria while South Korea accused Sweden of playing the press to distract them. Shin has yet to confirm whether he will use a back three or a back four against Sweden, whose main formation is 4-4-2. South Korea mostly used a 4-4-2 setup in their recent friendly matches. But whether it's a back three or a back four, South Korea kept a two-forward system with Son Heung-min and Hwang Hee-chan playing up front. If using 4-4-2, they're likely to be flanked by two Lees -- Hellas Verona's Lee Seung-woo on the left and Lee Jae-sung on the right.

South Korean captain and Swansea City anchorman Ki Sung-yueng will orchestrate the midfield with his defensive partner Jung Woo-young. Ki will be the man who will distribute the ball and control the team's buildup process. South Korea are likely deploy the center back duo of Jang Hyun-soo and Kim Young-gwon, who are currently the most experienced defenders on the squad. Veteran right back Lee Yong is set to start on the right side of the defense, with former Borussia Dortmund man Park Joo-ho likely to start ahead of Hong Chul and Kim Min-woo.

Son Heungmin Sweden vs Korea Republic, Match 12
Get the latest Cricket news, check out the India cricket schedule, Cricket live score . Like us on Facebook or follow us on Twitter for more sports updates. You can also download the NDTV Cricket app for Android or iOS.