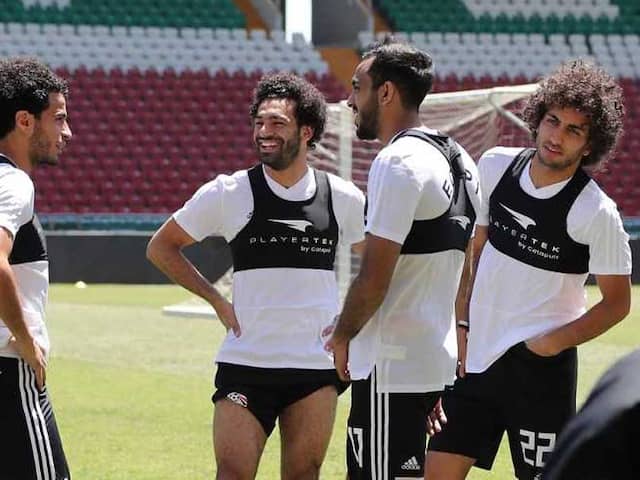 Hosts Russia will be hoping for another spectacular FIFA World Cup 2018 performance against Egypt when they face an under-pressure Egypt at Saint Petersburg stadium on Tuesday with an aim to secure a virtual place in the knockout stages of the World Cup. Russia are coming off a rousing 5-0 opening match win over Saudi Arabia and are in prime position to qualify for the last 16 of a World Cup for the first time since the Soviet Union's collapse. Russia conclude the group phase against two-time world champions Uruguay on June 25.

Two victories from their first two matches would guarantee Russia's qualification for the knockout stage and a possible matchup against either Cristiano Ronaldo's Portugal or high-octane Spain.

A draw against Egypt would put extra pressure on Russia against Uruguay that they would rather avoid.

Russian players concede that Mohamed Salah's fitness will be a vital factor in Tuesday's match.

Egypt's super striker Salah needed help from three teammates pulling on a jersey over his injured shoulder on Saturday, according to AFP reporters at the team's training camp.

Liverpool star Salah has not featured since leaving the field in tears early in the Champions League final just over three weeks ago after landing heavily on his left shoulder and had to watch from the bench as Egypt lost 1-0 to Uruguay in their opening game.

Salah has been declared 100 percent fit by Egypt's team doctor and his agent, leaving little doubt he will be thrown back into action in the Pharaohs' hour of need.

If fully fit, the sight of Salah, who scored 44 goals in a remarkable debut season at Liverpool, may start for Egypt against the hosts.

Denis Cheryshev was Russia's hero against Saudi Arabia as he came off the bench to score twice. And the Villarreal winger accepted it will be a more "interesting" clash if Salah is fit.

"If he's not there, does that mean our task becomes easy? Not at all," he told FIFA.com "If he plays, it will be hard but more interesting. He's one of the best and you always want to compete with the best and win."

Russia will be without one of their key players, with Alan Dzagoev expected to miss the rest of the tournament with a hamstring injury.

Russia Mohamed Salah 2018 FIFA World Cup Football Russia vs Egypt, Match 17
Get the latest Cricket news, check out the India cricket schedule, Cricket live score . Like us on Facebook or follow us on Twitter for more sports updates. You can also download the NDTV Cricket app for Android or iOS.