Ronaldo called on critics to be more objective and said referees were not providing sufficient protection for Neymar. 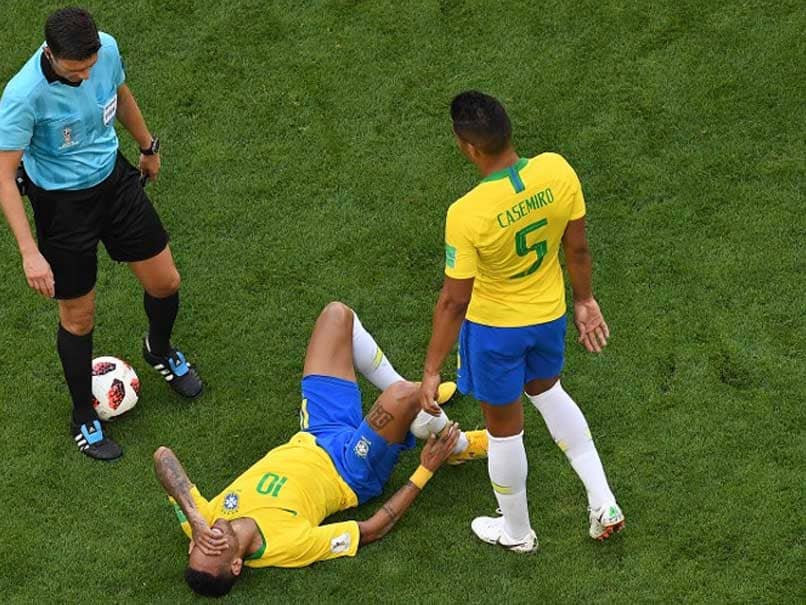 Neymar lies on the ground during Round of 16 match against Mexico.© AFP

Brazil football great Ronaldo has leapt to the defense of his compatriot Neymar, refuting claims the Selecao forward has been play-acting during the FIFA World Cup in Russia. Among those to criticize Neymar in recent days are former England strikers Gary Lineker and Alan Shearer, Argentina legend Diego Maradona and Mexico coach Juan Carlos Osorio, reports Xinhua news agency. But Ronaldo called on critics to be more objective and said referees were not providing sufficient protection for Brazil's No. 10. "We have to be more technical in our comments and not like punters in a bar," Ronaldo said during an event in Moscow on Wednesday.

"Football is interpreted in many different ways and there are many opinions. Neymar uses his mobility to defend himself from the bumps and hits that are dished out to him. The referees have given him little protection," the 2002 World Cup winner added.

"He is a great talent. When I was repeatedly targeted with violent actions I felt that I was treated unjustly. The criticism is stupid and the response that he is providing for the national team is marvellous. We still haven't seen the best of him."

With the early elimination of Germany, Argentina and Spain, Brazil are now strong favourites to win their sixth World Cup as the competition enters its final 12 days. Tite's team have been unbeaten in their four matches so far here, conceding just one goal in the process.

Their next assignment is a quarter-final clash with Belgium on Friday. The winner will play either France or Uruguay in the semi-finals four days later.

Meanwhile, Ronaldo said he hoped Brazil could avoid a semi-final clash with France, who progressed to the last eight by defeating Argentina 4-3, inspired by a Kylian Mbappe brace.

"We always have problems playing against France so I hope they get knocked out before facing Brazil," Ronaldo said.

Brazil Ronaldo Neymar 2018 FIFA World Cup Brazil vs Mexico, Round of 16 Samara Arena
Get the latest updates on IPL 2020, check out the IPL Schedule for 2020 and Indian Premier League (IPL) Cricket live score . Like us on Facebook or follow us on Twitter for more sports updates. You can also download the NDTV Cricket app for Android or iOS.